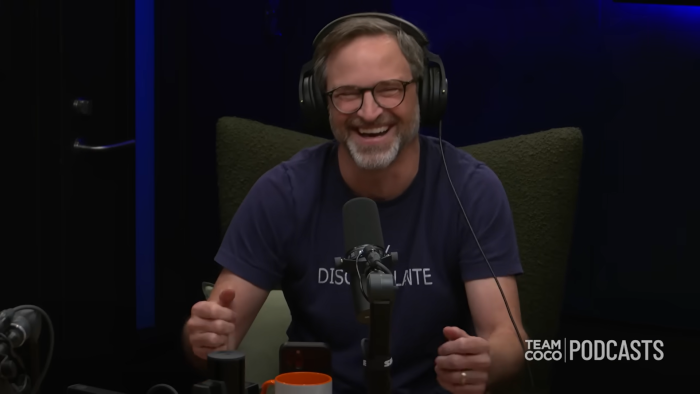 Matt Gourley has been podcasting since before spellcheck would accept that as a word. His pods include Superego, With Gourley and Rust, and one of my all-time favorites, I Was There Too. And that’s only a few of the pods he has cast. He’s also an incredibly talented actor and improviser. When Conan O’Brien Needs A Friend premiered, I knew I would be listening. I love Conan. When it was revealed that Gourley would be the producer, my excitement grew significantly and has not decreased since.

While Gourley didn’t appear on the show as frequently at first, it soon became apparent that he had great chemistry with Conan and his assistant, the equally important Sona Movsesian. Matt is now a fixture on the show, appearing primarily in the before and after segments, but also chiming in during the interviews from time to time. His wit, banter, and expertise make him a perfect third wheel to Conan and Sona’s podcasting penny-farthing.

In two recent episodes, Matt put his James Bond knowledge on display. If he seems eager to do so, it’s because he also has (had?) a James Bond podcast called James Bonding. While he is quizzing Sona and Conan, it feels more like a nerdy guy excited to talk about 007 with his friends. It’s sweet and charming, and Sona and Conan play along despite not being nearly as excited as Gourley. The earnestness on display is just one of many things Matt brings to the table.

To be clear, Sona Movsesian is also a kind of secret weapon for the show. She’s able to call out Conan in a way that no one else can, often leaving Matt as a kind of conscientious objector. There is a balance and rhythm to the show that Conan just wouldn’t have on his own. He needs people to pick on and people to pick on him. As long as Matt brings the former and Sona the latter, the show will continue to thrive.

Then one day, like the Beatles of old, they will separate, only to reunite and podcast atop their recording studio, yelling MAGOOSH into a microphone.


← Maybe We've Gone Too Far with the John-Wickification of Action Flicks? | Johnny Depp Set to Direct a Film No One Will Watch →