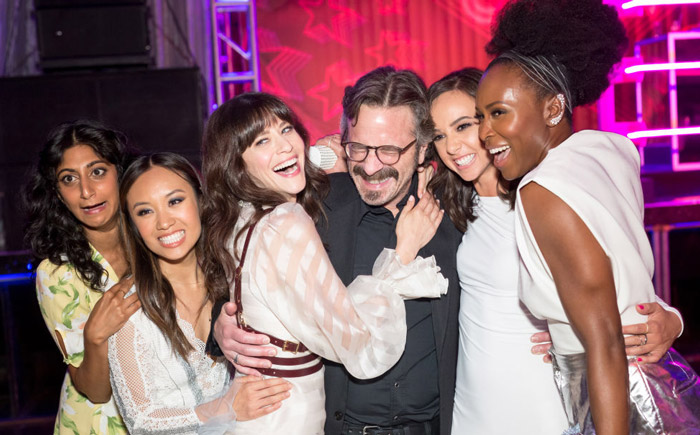 Earlier this week, Netflix announced GLOW was canceled. This hits fans and the cast pretty hard for several reasons. First up, Season 4 was slated to be the series’ final season, and so had been scripted as a farewell. Secondly, production had already begun! The crew had shot one and half episodes, but then was shut down by the pandemic.

Series creators Liz Flahive and Carly Mensch told Deadline, “There’s a lot of sh*tty things happening in the world that are much bigger than this right now. But it still sucks that we don’t get to see these 15 women in a frame together again.”

Glow is cancelled due to Covid cuts. 20fuckin20 punch to the heart 10 times. 💔 pic.twitter.com/tdx7E67S9R

We’re gutted. And I will forever console myself with these paintings. Thank you for your beautiful work. https://t.co/zqa8jxnBoz

Going to miss this… Forever grateful to my GLOW family for changing my life forever. ❤️ #glownetflix

GLOW has been cancelled. It sucks. For those of you that watched the show and supported it, thank you. I’ve never had so much fun on a job. One day I would be wearing an Elvis costume in a Malibu beach house, standing next to a drug-dealing robot, screaming out wrestling terms in a deranged banshee voice. And then the next day, I’d be on a closed set, acting in a sobering scene about the AIDS crisis and the taboos associated with homosexuality in the 80s. The tone of the show - its ability to swing from larger-than-life comedy to grounded character drama - is part of what made it so special. But the best thing about the show to me, is that when you watch it, you can see just how much fun we were all having. From the performances to the set pieces to the costumes to the hair and make-up to the brilliant writing, it was always So. Much. Fun. I love these actors, these writers, and this crew. I’m forever grateful for the 4 years I got to spend working alongside them. If you never got a chance to watch the show, I’d give it a shot. It’s worth your time. • #glow #aBashHowardProduction

Glow is canceled. And I don’t know exactly where to begin processing this ending. We had such a banger for you this final season. I’m devastated we don’t get to share it and that I won’t get to experience this show again. So much hard work went into making such a special one-of-a-kind dream. Amidst the bizarro-devastating-wrestling-circus of life we are experiencing as reality, this show was the light. Access to the switchboard in the control room. Extremes of joy, pain, support and strength beyond words. Undeniably-intoxicatingly fun. And an imagined world full of hope and literal glitter. The show is so meta and so important to me it breaks my heart and blows my mind. My head is still off my shoulders, but I know that I’m better off because of Glow. Forever saluting our Lycra badges of honor.

While Maron initially tweeted what Mae rightly describe as “a shrug come to life,” he then got to musing on Instagram in a 33-minute video. In it, he reflects on the press’s mischaracterization of the death of his lover/Glow director Lynn Shelton, the state of our nation, and—to the point of our focus here—the idea of making a GLOW movie.

Kate Nash shared this excerpt on Twitter, calling on fans to show their desire for a proper sendoff.

I agree with @marcmaron about saving @GlowNetflix and the squirrel 🐿 retweet if u agree, fuck it let’s be actual glow girls and #saveglow pic.twitter.com/nNQWFR130f

“Okay so you don’t want to do the show anymore,” Maron says, “But let us make a movie. Right? I mean, let us wrap it up in a two-hour Netflix movie. They had the whole season laid out. You know, we know sort of where it’s going to go. Why don’t you give the showrunners and the writers and the cast an opportunity to finish the story in a movie? Right? I mean, I think that would be the best thing.”

The video was shared by other cast members, including Britt Baron, Britney Young, Kimmy Gatewood, Rebekka Johnson, and Marianna Palka.

Hey @netflix listen to @marcmaron and the FANS who are willing to wait for another season or movie, so we can finish our story!! The cast is IN, the writers are IN, the fans are IN. Are you IN @netflix ?!? #saveglow @GlowNetflix #glownetflix https://t.co/iPtHP1cr1t

let's do this! #squirrel https://t.co/dXVlChUG2p

I agree with @marcmaron! Hey everyone, let’s #saveGLOW! This is what the Gorgeous Ladies would do! #glownetflix

Thank you ⁦@marcmaron⁩ for the possible plot twist of you saving ⁦@GlowNetflix⁩ #saveglow Marc and his cats want a Glow movie 🎥 💗💗💗 “I only respect the cats who take the chances! They are worth more than gold!” pic.twitter.com/2Hb5uYAHsr

Under the hashtag #SaveGLOW fans are battling back for the critically heralded women’s wrestling show that was full of humor and heart.

I know everything is awful right now, with so many things beyond entertainment to worry about…

…but it'd be really nice if the #SaveGLOW hashtag could get trending. I wanna see a 4th Season, @netflix. Please! pic.twitter.com/YFH4ArydTV

Come on, @netflix, these Gorgeous Ladies of Wrestling deserve better than this. Let them complete their arcs. #saveglow pic.twitter.com/yczwMt6dzE

Oh @netflix. It makes no sense whatsoever. We’ll wait. Just like the entire world has been and will continue to do. Make @GlowNetflix season four happen. Even if it’s in 2030. Serve the story. Finish the story. It’s literally your one job, and you can do it. #GLOW #saveglow pic.twitter.com/X0VJ2BKTZK

I can't believe that art is mirroring life right now and the GLOW ladies are fighting for their show. C'mon @netflix do the right thing and #SaveGlow ! 🐿️🐿️

@netflix they deserve a proper ending. We’ll wait as long as we have to. #saveglow https://t.co/m3dWHovTBV