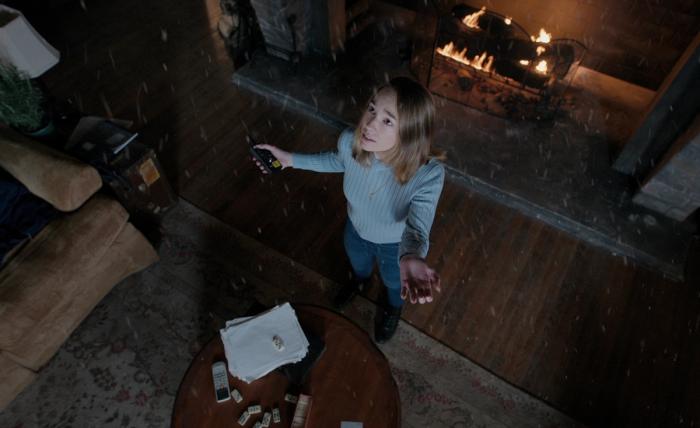 'Manifest' Hand Waves Away Logic by Replacing It with Religion

At the end of Manifest episode 5, season 4, “Squawk,” Cal — who survived leukemia when he was younger — coughs up droplets of blood. I can see where the first half of the season is headed now. I do not care for it. It’s making me anxious.

Before that, however, everyone had callings, and everyone eventually found themselves at Adrian’s compound, where Ben was being held captive. The other 828 passengers learn that Adrian has been harboring Angelina and Eden, and they aren’t happy about it, except for Erika Burness, who has inexplicably used fertilizer to build bombs and place them throughout the compound. Erika is deep into the cult aspect of the compound, and Angelina — who continues to believe that Eden is her guardian angel — is down to blow up the place, too.

We are also privy to a silly flashback where Angelina is kicked out of her home for killing Grace — what? why? What’s the big deal with murder? — and nearly takes a header off a bridge and brings Eden with her. However, before Angelina jumps, Eden calls her “momma,” which Angelina takes as a sign not to kill herself and the baby. Angelina is clearly looking for signs anywhere she can find them.

Meanwhile, when Michaela and the rest of the folks show up and free Ben — being held in the basement of the compound — Ben tracks down and rescues Eden. Angelina freaks out and threatens to blow everyone up using the detonator she retrieved from Erika. Cal arrives in time to stop her. When Angelina holds up the detonator, Cal tells Ben to take Eden and run. He knows Angelina’s detonator doesn’t work because he has had another epiphany. The callings are “memories.” He knows what’s going to happen because he has already lived this.

The timeline makes no sense to me, but I think these “memories” are retrieved from when Cal (and Company) were in the glow of the plane, i.e., in divine consciousness, a “heavenly state of all-knowingness.” Saanvi, meanwhile, is looking to find the “God Frequency.” The series is leaning really hard into this Christian cult business. No wonder Manifest is so insanely popular. Good luck to the writers trying to retroactively square four seasons of “callings” with the “memories” that they are now. Oh, wait! They don’t have to. They just have to say “God” or “Jesus” or “divine consciousness” and handwave away all logic, just like the Republican party. It’s brilliant, really. It’s the religious equivalent of, “I said so.”

Zeke seems to be losing his empath powers and replacing them with RAAAAAAAGE. When Erika Barnes points a shotgun at Michaela after the 828 compound blows up, Zeke shoots her repeatedly. Elsewhere, Adrian finds Angelina — injured from the blast — lying in the middle of the road. The force of the explosion didn’t blow her out onto the road, did it? This show? It is dumb.