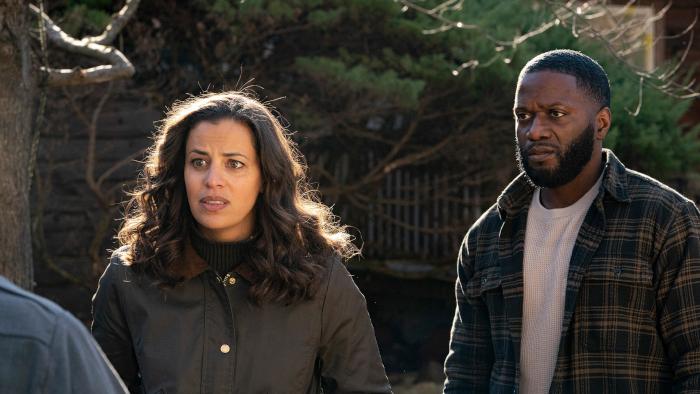 'Manifest' Delivers Its Best Episode Since the Pilot

This week’s double-episode of Manifest concludes the Meth Heads’ storyline. For some reason, though they only spent a few minutes together before Meth Head #2 was put into prison, he and Paige Jennings from The Americans are madly, passionately, want-to-spend-their-lives-together in love with each other. All that Meth Head #2 wants to do when he gets out of prison is hold her and watch the sunrise. There should be a Hallmark card for that. Unfortunately, while talking with Paige from The Americans, he’s yanked away from prison. With only one day left to live, the NSA has taken Meth Head #2 into their custody so that they can experiment on him ahead of his death day.

Meanwhile, this drawing is apparently a calling asking Meth Head #1 to kill Michaela. Don’t tell me you all don’t see it, too! 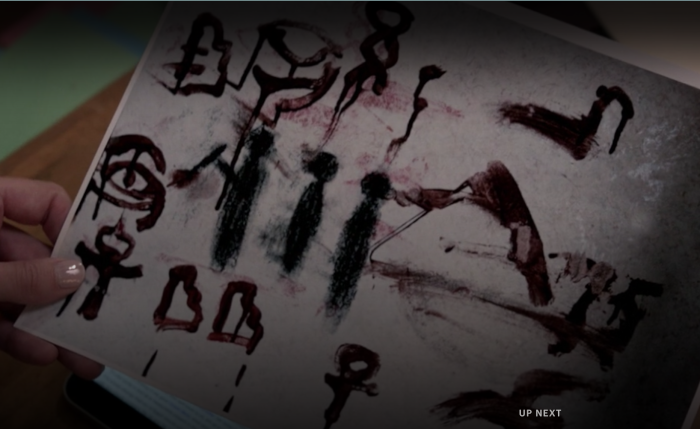 Meth Head #3, who is in the hospital and still recovering from injuries sustained when his meth supplier, his old high-school football coach, shot him. He confirms that the drawing is a calling for Meth Head #1 to kill Michaela. Ben Stone, meanwhile, tries to free Meth Head #2 from the NSA experimentation in the hopes that he can help save Michaela, but the NSA doesn’t want to release him. “The fact is, [Meth Head #2] is a unicorn, and unicorns need to be studied for the greater good.” Poor Meth-Head Unicorn.

Meth Head #1, meanwhile, is on some kind of killing spree, trying to track down Michaela. However, Olive Stone is trying to find out more about the drawing above. A friend of hers — who I think we may have met once before — asks Olive how she found a drawing of something that’s on a 2,000-year-old papyrus that she’s never seen? Somehow, they decipher that the drawing refers to The Last Trial of three people who are given a second chance in life, one of whom uses his to find love (Meth Head #2), one who finds peace (Meth Head #3), and one who seeks vengeance (Meth Head #1) and “a river of blood is spilled.” They discern that the calling is really about Meth Head #1 choosing to forgive Michaela instead of killing her, otherwise, he will die.

Ben reckons the only way to save his sister is to bring Meth Head #2 along, but the NSA only agrees to release #2 when Ben offers to allow them to test him in his stead. “I’m a bit of a unicorn myself,” he says. (Next week’s storyline appears to be about the experimentation on Ben).

The calling leads everyone out into the woods, where Meth Head #1 is waiting, and thank god it is a two-parter because the first ended with Zeke knocked out in the woods. I don’t think I could’ve gone a whole week not knowing if he’d been killed by Meth Head #1. The next episode, meanwhile, opens with Meth Head #1 shoving Michaela over a cliff before seeking out Cal because now Meth Head #1’s callings are linked to Cal. Miles and miles away, Cal won’t stop bouncing a goddamn basketball, which is giving Meth Head #1 a headache.

Zeke and Michaela survive (obviously), but Meth Head #1 takes off in their car, headed toward Cal. Zeke develops some weird new power where he can send a calling through whatever those blurry, wavy things are in Donnie Darko. He lets Ben — who is miles aways — know through that Donnie Darko wave that Cal is in trouble (does no one use a phone anymore?).

At this point, everyone is heading toward Cal, who is in upstate New York. He’s hidden away from the Meth Heads, except that everyone apparently knows where he is for reasons that aren’t worth going into, except that it involves Grace and her estranged brother, Tarik, who spend much of the second episode resolving relationship problems that absolutely no one cares about.

When Meth Head #1 arrives, however, Tarik does take a knife in the back trying to save Cal. He doesn’t survive, so it is a good thing he and Grace resolved their differences. Meth Head #1 also kills the agent keeping watch over Meth Head #2 in a gunfight and takes off toward the woods in search of Cal, reasoning that if he kills Cal, then he won’t die, because that’s what happened the last time at the lake. Meth Head #1 is not very bright. Meth Head #2 — who is his brother, by the way — tries to stop Meth Head #1, but there’s just too much meth!

Thankfully, Meth Head #3 — who escaped from a prison hospital room — arrives in time to protect Cal. He and Grace — who is now wielding a rifle — keep Meth Head #1 at bay long enough for his death day moment to arrive, and they all watch as he drowns in the middle of the woods! 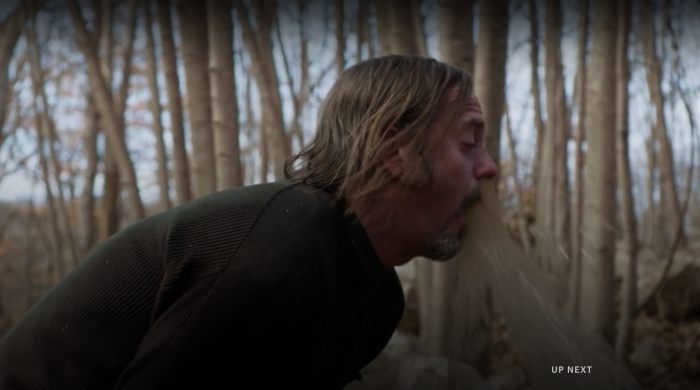 Meth Head #2 and #3, however, survive! They will have to return to prison, but Paige Jennings from The Americans is more than happy to wait for Meth Head #2, who — again — she’s only known for like 3 hours at this point. They do get to share a kiss, which is filmed from above because this is probably a real-life couple brought in to make out in their stead because of COVID restrictions. 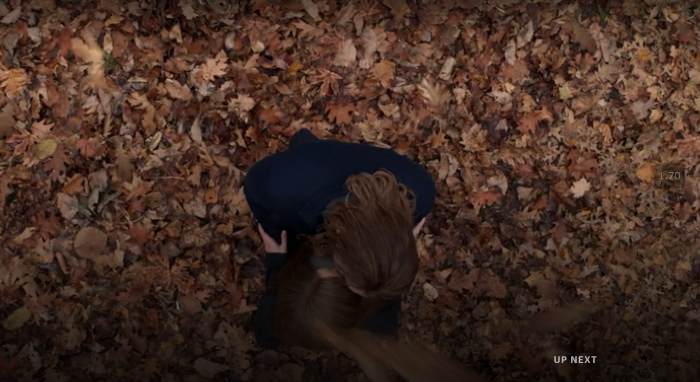 But then twist! This is my favorite part because back in New York, a rando security guard brings in the final, long-missing piece to the papyrus (Deus Ex Papyrus!), and even though it is the bottom corner piece, it apparently contains the f**king footnote to The Last Trial! 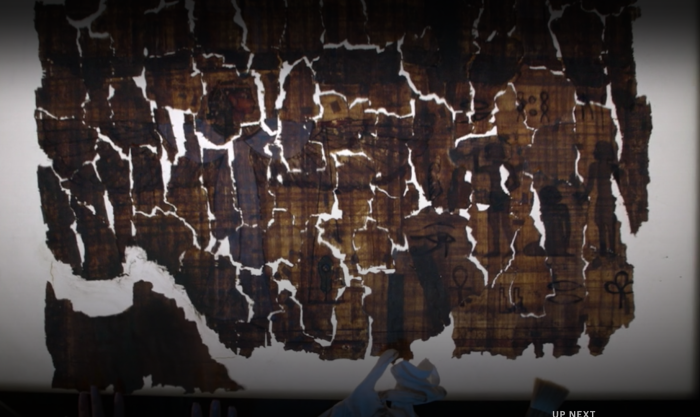 I can’t read that, and at the beginning of the episode, neither could Olive, which is why she had her friend there to translate it. However, now Olive can read it, and what it says is that, during The Last Trial, the three are not judged individually, but collectively, which means that Meth Head #1’s bad actions has doomed all three. Just like that, Meth Head #2 and #3 keel over and die, much to the dismay of Paige Jennings from The Americans. 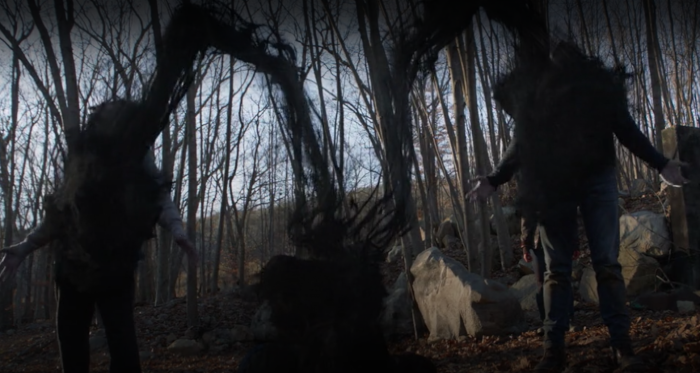 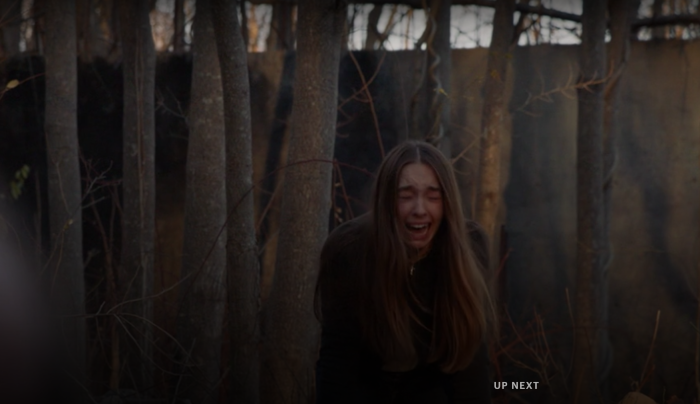 Well, well, well, Jeff Rake. That’s a surprisingly dark ending! A federal agent is dead, Grace’s brother is dead, and all three Meth Heads are dead, too, leaving Paige Jennings from The Americans inconsolable. Everything is relative, but I will say this: It was probably the best episode of Manifest since the pilot.

The downside, however, is that this feels like something of a closed-loop, which is to say: We spent the first six episodes of the season on the Meth Heads, who are now dead, and from whom we have learned nothing, except that all of this is maybe somehow connected to some Egyptian dude 2,000 years ago, which the show may or may not ever return to. There are big questions that need to be answered, but Manifest continues to pose smaller questions and answer them in lieu of the answers we want. But then again, that’s the nature of network television, isn’t it? We can hardly fault Manifest for doing what every serialized drama has been doing since the beginning of television, can we?

There are another two episodes next week because this show is trying to kill me.

← Spoiler Review: 'Wild Mountain Thyme' Makes Us Wonder Are The Straights Okay? | T-Pain Wipes the Floor With a Bunch of Racists on 'Call of Duty' →