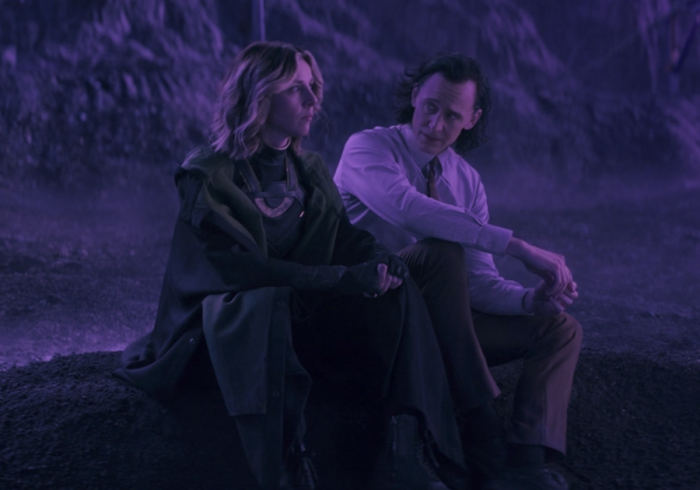 'Loki' Episode 3 Recap: Can A Loki Trust A Loki?

“Doctor Who but selfish” was the vibe of this week’s episode of Loki, which found Loki and his Variant nemesis stranded on a doomed moon and forced to work together to escape. It was a polarizing episode, though, depending on your expectations. If you wanted big reveals and MCU plot propulsion, then you may have found episode three lacking. However, if you wanted a deep dive into what makes a Loki a Loki, and what makes two Lokis different, then you were in for a treat. Not much happened in “Lamentis” other than a whole lot of talking — and that’s entirely the point. Loki just proved that even if it’s a six-episode time travel show, and even in the middle of an apocalypse, it will not be rushed.

So: What happened? In terms of plot, the episode picks up from the end of the previous episode with Loki following the Variant through that time door… and right into the heart of the TVA. Apparently her big plan is happening now and it involves brute-forcing her way straight to the Time Keepers! That suits Loki just fine, since he also wants a chance to meet the big wigs — though if he can’t get in there as her partner, he’ll settle for taking her hostage as a bargaining chip. I know I said this was a talky episode but there are also some standout fight sequences in the mix starting here, as our two variants fend off guards and face down each other until finally Ravonna shows up. And since Ravonna would happily terminate both variants on the spot, our Loki steals the little door doohickey off the Variant and opens an escape hatch underneath them.

They land on a moon called Lamentis-1 in the year 2077, to the Variant’s horror. Turns out they’re smack dab in the middle of one of the worst apocalypses possible, as a whole-ass planet is 12 hours away from crashing into them — an event that leaves no survivors (duh). With their door doohickey, the Tampax (oh sorry, the “TemPad”), out of juice, they set out to find a power source strong enough to charge it up so they can get back to their adventures in time and space. The only option is the Lamentis Ark, a ship that is supposed to carry the last survivors away from the moon before its destruction —except history shows that it is a failure because, as mentioned, there were no survivors. So there’s no reason to feel guilty about stealing power from a failed rescue mission! Before they can hijack the ship, however, Loki gets tossed off a train and breaks the TemPad in his fall — so now they have to hijack the Ark in earnest, as it’s their only chance to make it off the moon. And fine, maybe they’ll take some survivors with them.

Too bad the episode ends with a chunk of the raining planet blowing up the Ark, and their last hope of surviving the apocalypse with it.

No really, that’s it. That’s all that happened. Loki and the Variant got backed further and further into a corner from which there’s no escape (at least until next week, when presumably the TVA will catch up with them and whisk them away or something else deus ex machina-y). The ending was admittedly abrupt, and could read as unsatisfying — if you still think the point of the episode was the escape attempt. It wasn’t. The point of the episode was to give Loki and his Lady-self a chance to get to know each other, and for us to get to know them.

So what did we learn?

- The Variant is in fact a Lady Loki, but she doesn’t want to be called “Loki” at all. Instead, her chosen alias is “Sylvie”, which aligns with a lot of the speculation that came out last week (due to some leaked credits from other territories). That name isn’t random, though. In the comics there is a young human sorceress named Sylvie who called herself the Enchantress, after the Asgardian I mentioned last week, Amora the Enchantress — but Sylvie was in fact a creation of Loki. In a way, the show’s version of Sylvie is also a “creation” of Loki in that Loki reinvented herself to be Sylvie. It’s a neat little twist that still leaves the door wide open for Amora the Enchantress to join the MCU somewhere down the road.

- During Loki and Sylvie’s heart-to-heart on the train, and before the terrible “Love is an imaginary dagger” metaphor, Loki confirms that he is… bisexual!

From the moment I joined @LokiOfficial it was very important to me, and my goal, to acknowledge Loki was bisexual. It is a part of who he is and who I am too. I know this is a small step but I’m happy, and heart is so full, to say that this is now Canon in #mcu #Loki 💗💜💙 pic.twitter.com/lz3KJbewx8

Sort of explains why they wound up on the Bisexual Lighting Moon, doesn’t it?

- Whenever it was that Sylvie departed from the typical Loki timeline, it must have been early on. She reveals that she always knew she was adopted, but that she barely remembers her mother — and certainly her mother didn’t have time to teach her any magic. Her enchantment trick is something she taught herself (and something she finally relents and explains to Loki, which totally won’t come into play in the back half of the season or anything…). It also sounds like the TVA has been chasing her for most of her life, so they may be a key part of what made her so different.

- And speaking of the TVA, Sylvie drops a major revelation in an offhand way when she mentions that Hunter C-20 is just a normal human woman who likes margaritas. Why does that matter? Because Mobius told Loki that the TVA staff were created by the Time Keepers! Nope, says Sylvie — they’re all just variants who have had their memories wiped. This may explain Mobius’ affinity for jet skis, but more importantly, it means that Mobius, Casey, and everyone else in the TVA should also exist in the Sacred Timeline somewhere. Oh, and maybe the Time Keepers aren’t as God-like as they’d like everyone to think.

- We always knew Loki was a silver-tongued hedonist who relied more on guile than aggression, but those are qualities that Sylvie appears to lack. She prefers the brute force approach, perhaps in part because she only has the one trick up her sleeve. On the other hand, she is an enormously focused individual who can stick to a mission for years at a time. Loki tends to be more of an opportunist — instead of multi-step plans, he hangs out and waits for weakness to exploit and then acts in the moment (what Sylvie calls “doing a thing”). The big difference, though, is their hunger for power — or Sylvie’s lack thereof. When she seemingly confirms that her mission had been to attack the Time Keepers and blow up the TVA, leaving a power vacuum in her wake, Loki is rightfully astonished. “I’d never have done that!” he exclaims, and he’s right. He may be the God of Mischief, but his pride (or narcissism) would never let him leave an opportunity for gain behind. He’d never create a power vacuum — he’d seize it for himself.

- Despite their differences, it seems as though they actually do begin to trust each other as they get closer to the Ark, especially as they reveal more about their inner selves to one another. And yet I just can’t shake the feeling that it’s all too easy. This is Loki we’re dealing with. Two of them, in fact. Are we really supposed to believe they aren’t still playing each other? We know Loki studied different apocalypses in the timeline, trying to find where Sylvie might have been hiding. Could he have intentionally dropped them onto Lamentis-1? Did he intentionally get himself thrown off the train and break the TemPad, perhaps to buy time for Mobius to catch up? Or for that matter, did Sylvie actually succeed in enchanting Loki when she tried, and the rest of the episode happened in his mind?

Of course, there’s still one big thing we have yet to learn in Loki, and that’s WHO THE EFF RICHARD E. GRANT IS PLAYING. Wouldn’t you know, IMDb now lists him as appearing in 3 episodes. So maybe he’ll show up next week, or maybe he’ll appear in the last 5 minutes of the finale. Maybe he’ll play a jet ski dealer in a Mobius flashback. Your guess is as good as mine.

← You Are The Worst, 'The Blacklist' | Salma Hayek's Breasts Aren't Fake, They Just Won't Stop Growing →