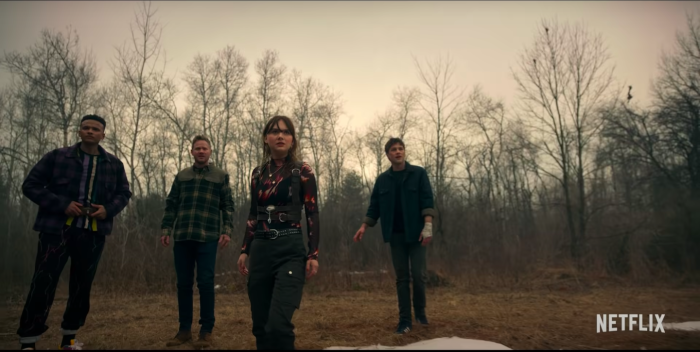 I could make one of those multi-part, three-hour video essays on everything wrong with Netflix adaptation of Joe Hill and Gabriel Rodríguez’ Locke & Key, but that means I would have to rewatch the first season because the damn thing has been erased from my memory as if I was hit by the Riffel Rule. I do tend to be a staunch Originalist when it comes to adapting a book source, but dammit man!, this comic-book series in particular was neatly packaged and oven-ready for a live-action adaptation! from the plot denouement to the graphic style.

Whatever the case, Netflix released a full-length trailer for season 2, following a teaser from a few weeks ago:

The trailer starts with Nina Locke (Darby Stanchfield) at a grief support group (or is it AA?) trying to cope with both mourning and moving to a house where weird shit happens all the time but she literally can’t see it. Meanwhile, interdimensional demon Dodge is now turning himself into a “nerdy kid in love with Kinsey” who no one would suspect, which is the exact opposite of who Dodge (the human) was. Then we hear a cavalcade of clichés: “it’s time to finish what I started”; “the keys can bring about the greatest good or the darkest evil”; “it’s up to us now, this has to end!”, set to those minimalist musical arrangements and ticking clocks we’ve heard in a thousand horror trailers before. We also get more shots of the Shadow Key, what look like British Redcoats standing way too close to the Omega Door and the Blue Man Group.

I’m trying not to be cynical, but I can’t not say “I can’t!” It looks as if producers injected all the worst traits of media made for teens in the US into a property that actually deserves the moniker of “masterpiece”: Lack of subtlety, awkward and misguided attempts at tackling difficult issues, pretentious dialogue because US producers underestimate teenagers. SIGH. Whatever, read the comic books kids.

Locke & Key Season 2 will premiere on October 22, while Season 3 has already wrapped filming.

← 'The Daily Show' Tackles The History Of Religious Exemptions In The U.S. | 'What's Something a Fictional Character Has Said That Has Really Stuck With You?' →