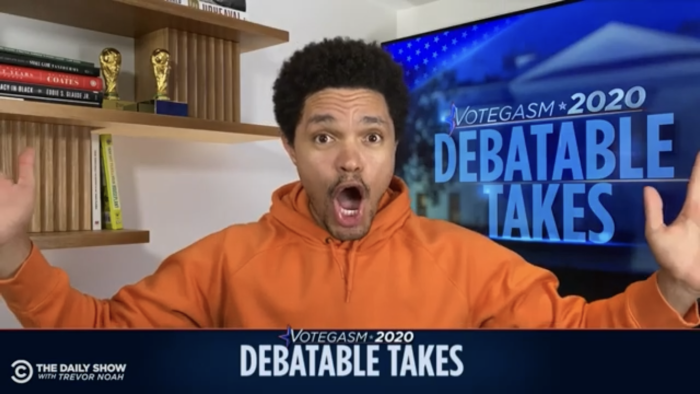 Live, On Your TV: Late Night Hosts React to the Debate

It’s the most wonderful time of the year! JK, EVERYTHING IS TERRIBLE. On top of an already … troubling year, last night was the first debate between “grandparent who will always give you five bucks for snacks as long as you listen to his story” Joe Biden and “grandparent who shows up once a year to make weird comments about your sister” Donald Trump.

It went about as expected. At times, Biden failed to make a coherent point, yet he also had several moments where he channeled the frustrations of a weary country. Trump interrupted CONSTANTLY and would often ramble on even when he had nothing to say.

A bright spot in all of this was the late-night scene. Many hosts went live following the debate to deliver monologues that felt fun and spontaneous. Here are a few of my favorites.

Quarantine mode really works for Jimmy Fallon. Despite starting the night off by wishing he could interview someone in person (which featured a great bit between him and John Cena) Fallon seems more relaxed and therefore, much sharper performing on his own. A highlight came after a clip of Trump claiming his idea of injecting bleach was sarcasm and Jimmy, pretending to be someone who listened to the president, saying “What do you mean sarcastic?”

Stephen Colbert is right at home discussing politics, but even he was frazzled by last night’s debate. “I mean for Pete’s sake, children watched that! I’m glad I already had my children because I think just watching that sterilized me.” His monologue was funny and at times, poignant. You could feel his disappointment and dismay when discussing Trump’s refusal to condemn white supremacy.

Monday was Trevor Noah’s fifth year anniversary as host of The Daily Show. What better way to celebrate than to cover this shouting match between two old white men?! Noah came in hot, shouting “Yoooo! What was that?!” From there it was off to the races. He delivered a great recap with solid jokes and palpable energy. “Trump did more interrupting than Kanye West in a room full of Taylor Swifts,” said Trevor towards the end of his take. Despite being the shortest, it was pound for pound the funniest of the monologues I watched.

Now, I didn’t cover all the late-night host’s takes on the night. Honestly, I watched the debate live and then three opening monologues and now I don’t even know if I’ll watch the next debate. I’m… over-debated? If there’s a moment I missed that you loved, throw it in the comments below!

← 'The True Adventures Of Wolfboy' Finally Has A Release And Trailer! | Hollywood Writers Weigh in On the Debate with Self Burns →