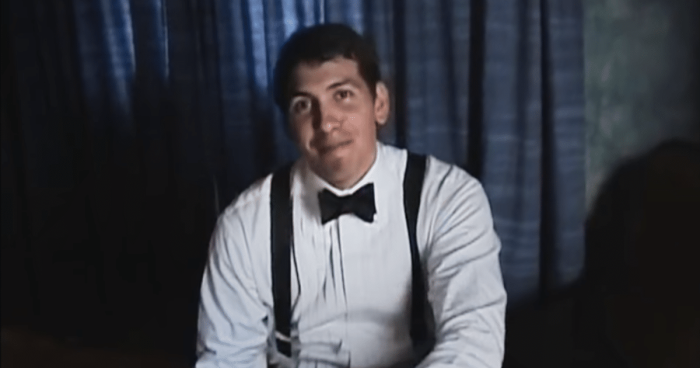 Lingering Questions In The 'Unsolved Mysteries' Case Of Rey Rivera

A six-episode season of longtime true crime enthusiast favorite Unsolved Mysteries hit Netflix on July 3 with a few differences from its previous 14 seasons. What didn’t change was the maddening itch it provokes in everyday sleuths that pore over every detail —everything said, and everything left unsaid— in an attempt to tease out answers missed after all of these years.

While all of the episodes, save the one about the UFO sightings, were horrific examples of botched police work, questionable suspects, and grief, the first episode seems to stand out in the minds of viewers. Mystery on the Rooftop recounts the story of Rey Rivera, a 32-year-old man living in Baltimore that went missing while his wife of six months, Allison, was out of town on business.

Rivera worked for a school friend, Frank Porter Stansberry, as a writer and videographer for Stansberry and Associates. The company is now “the world’s largest investment newsletter company” and was the origin of the last call Rivera received before rushing out of his home and disappearing. Allison got in touch with a colleague staying at the couple’s home, Claudia, after calling Rivera’s cell phone and getting no answer. That’s when Allison learned about the final phone call and hastened home after speaking to their house guest again the next morning and finding that Rivera was still missing.

Claudia returned to her own home by the time Allison arrived. Rivera received the final phone call on May 16, 2006, and the search for him began the next day when Allison returned home, joined by their families. Police found nothing, but Allison’s parents found their daughter’s car, used by Rivera the night he disappeared, parked in a lot by Stansberry and Associates and the Belvedere Hotel. His brother Angel found a note taped to the back of Rivera’s computer that contained cryptic writing and did not seem to be a suicide note. A week after he went missing, someone reported a hole in the roof of a section of the Belvedere Hotel, and Rivera’s body was found in the closed meeting room below.

Multiple questions surrounded the death of Rivera, including how he managed to jump an estimated 43 feet from the roof of the Belvedere Hotel to land where he did 14 stories down. Rivera was wearing flip flops and some calculations put the speed required for someone to jump that far at 11 miles per hour. As pointed out by the episode, the Belvedere Hotel’s roof isn’t open to the public and someone would have to know where they were going to access it. Additionally, Rivera was afraid of heights.

Strangely, the injuries to Rivera’s body were consistent with a fall but his glasses and phone were not cracked or broken in the fall. One flip flop had damage where the fabric ripped from the sole and a money clip he always carried with him was missing. How could this be?

Unable to determine whether Rivera jumped, was pushed, or perhaps killed elsewhere and the area staged, his death was declared undetermined by the medical examiner and deemed a suicide by police. Rivera’s boss and friend, Poter, initially provided funds from his company as a reward for information concerning his employee’s whereabouts. Once the body was discovered, he retained a lawyer and placed a gag order on all employees concerning Rivera and his death. Porter did not attend any of his friend’s memorials or his funeral.

This case was previously covered in a 2018 book written by Mikita Brottman called “Unexplained Death: A True Story of a Body at the Belvedere.” One Reddit user claims that the Netflix episode left out crucial details about the case narrated in the book. For example, Rivera took out a $15,000 loan on his wife’s credit card to start his own production company, but Allison knew nothing about it and had receipts for items already paid for in regard to the company. The night Rivera left the house, he returned briefly before leaving for the last time. What did he forget?

Author Brottman lived in an apartment near the Belvedere Hotel and heard a loud booming sound the night Rivera died; one that rattled the windows of her home. Police never interviewed her about that night and did not diligently knock on all doors to get information about anything seen or heard.

As for the note left behind by Rivera, the episode blurs out a lot of it and remarks upon the odd nature of the note, with mentions of movies, actors, family members, and Freemasons in it. One Redditor came up with a theory about the note and Rivera’s death:

I am watching the Rey Rivera episode on Netflix and what really caught my eye was the note Rey wrote on the day he died and he hid the note behind the computer. It had all these names of actors, his friends and family, quotes from free masons and a list of movies.

One of these movies was The Game. Immediately, I thought: OF COURSE! There is one big scene at the end of the movie where the main character jumped off the roof (!) of a fancy hotel and goes through the (glass) roof. The similarities to Rey are truly astonishing.

The whole movie is about this crazy game that a company arranges that makes you think you lose everything in order to let you appreciate life again.

Rey was an unsuccessful movie script writer and maybe he got involved in sth that tried to imitate The Game in some way.

Another person many amateur sleuths are stuck on is the houseguest Claudia. Some believed an affair was going on between Rivera and his wife’s colleague, although nothing exists to prove that connection. Others question why she left the house before Allison arrived home and why she’s never mentioned by police or anyone else for the remainder of the episode.

Rivera’s case was brought up on Reddit’s r/UnresolvedMysteries three years ago, prior to the release of Brottman’s book. This breakdown of the case included some interesting tidbits about the time leading up to Rivera’s death that the Netflix episode didn’t have time to introduce.

According to u/peanutbaron, the couple went to Los Angeles to look into moving back to the area and when they returned to Baltimore Rivera became overly protective of his wife and accompanied her everywhere she went. On one such day, he read a book in the stands while Allison ran on the track.

As she jogged and Rey sat in bleachers reading a book, a man appeared. Her husband, she recalls, freaked out. Even though the mysterious interloper left without incident, Allison says Rey seemed unnerved. “It was not like him.”

Who was that man and did Allison ever describe him to the police so he could be questioned? Was this an unjustified reaction by Rivera due to mental problems or paranoia that he kept to himself? How did Rivera end up on the roof of the Belvedere Hotel and who called him from Stansberry and Associates that night and what could they say to prompt such a reaction from him?


← When COVID Hits Too Close To Home | ScarJo Hands Off the Baton, Brad Pitt's Wick, and Furiosa Is ... Bummed →