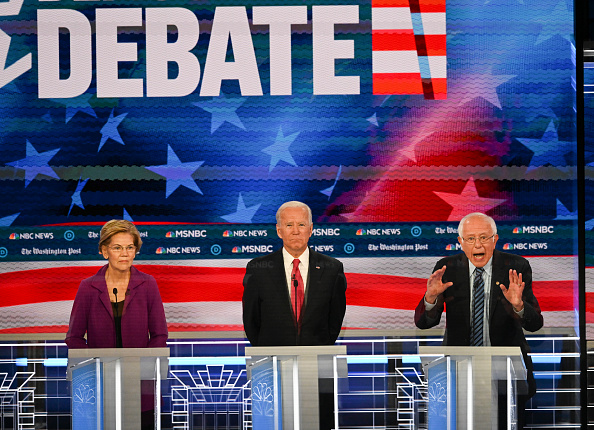 11:11 — Biden wins Massachusetts, which — along with his win in Minnesota — is the biggest surprise of the night. He apparently didn’t campaign in either state.

10:27 — Bernie wins Utah. Also, if you were watching Joe’s speech and couldn’t figure out who the protestor who JUMPED THE STAGE was, it was this: VEGANS!

Biden getting interrupted by Direct Action Everywhere, anti-dairy protesters who have been all over California.

9:48 — Biden has won Minnesota. And I know no one cares ultimately, but in my home state of Maine, Biden is beating Sanders by 28 votes with 35 percent reporting. Sanders was expected to very well here.

9:15 — Biden has won Tennesee and Oklahoma. This stat is kind of interesting:

Oklahoma is the cleanest test tonight of how much of Sanders’s 2016 vote was simply anti-Clinton.

In 2016 exit poll, Sanders won OK independents by 48 points, and only lost moderates by 1 point.

Tonight he’s up just 14 with independents, losing moderates by 36. #SuperTuesday

8:37 — Bloomberg speaking in Florida, apparently after having drunk a pitcher of margarita.

Bloomberg on tonight: "As the results come in, here is what is clear: No matter how delegates we win tonight, we have done something no one else thought was possible. In just three months, we have gone from 1% in the polls to be a contender for the Democratic nomination."

8:00 — Unsurprisingly, Biden takes Alabama. Massachusetts, Oklahoma, and Maine are too close to call (curious, since I did think that Bernie would run away with Maine, based on the one poll the state has conducted in recent months). Exit polling in Massachusetts doesn’t look great for Liz. Damnit. It’s because they all want to keep her as their Senator, is what I’m telling myself.

7:50 — Pretty great turnout, even for Sleepy Biden and Crazy Bernie.

That means a projected turnout between 957-1063K

7:35 — Here’s the night’s first dumbassery from a pundit.

The Bernie supporters here? The cut the cord a long time ago, jackass.

7:33 — After California and Texas, the biggest delegate haul tonight is in North Carolina, where it has already been called for Biden based on exit polling. He won over 60 percent of the Black vote.

7:20 — Biden has won the Virginia primary, in what appears to be decisive fashion, according to exit polls. Bernie, likewise, has taken Vermont.

It is Super Tuesday, and tonight results from 14 states will begin rolling in around 7 p.m. Fourteen states will help determine the future of this democracy and also set the narrative for the race for at least another week. It’s a big night. You can spend it watching CNN with those with whom you live. You can spend it browsing Twitter and/or Facebook. Or you can spend some time in our comments section celebrating, shaking your fists at humanity, or offering your own online punditry. I’ve read your punditry. It’s better than John King and Dana Bash (though, there’s less sexual chemistry), less frantic than Steve Kornacki’s meth-fueled analysis, and more incisive than Nate Silver’s mansplainey bullshit.

I will likely check back here in both the comments and above the line to offer updates on results. Have fun. Don’t despair. Whatever the outcome, we’ll make it work in November. Also, be nice to each other (except for the Tulsi voters. You have my permission to boo the hell out of them. Honestly, I’m not crazy about the Bloomberg folks, either.).