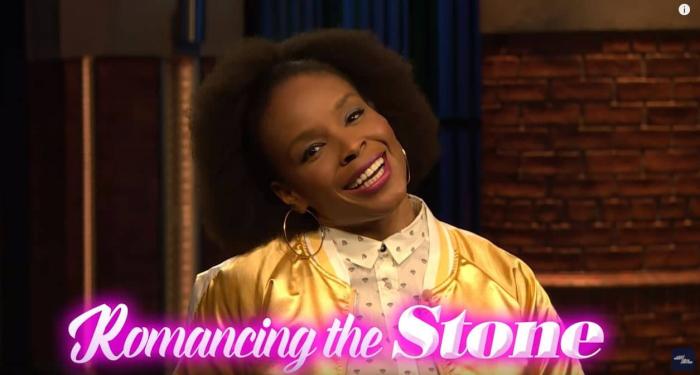 Facts: Amber Ruffin is super, super great, and I wish she’d be my best friend. I love her. If she’s out there, not reading this because she’s got a real job and sh*t to do, I hope she knows I think about her a lot, but not in a creepy way.

In fact, it’s part of that thinking about her a lot that I think lets me tap into the Amber part of my brain. I’ve spent whole days listening to old “Amber Says What” and “Jokes Seth Can’t Tell” segments on YouTube while working. Or at least “working.” And all of that exposure has seeped into a part of my mind so that now, as I’m listening to Amber react to odd bits of news, I hear Amber’s voice reacting to Amber. Yes, it’s amazing.

Would you like to know what it sounds like to have dueling Ambers as the soundtrack to your day? I have no way of knowing. I’m assuming you’ve already clicked on the video and aren’t bothering with the words I write here, but I still get to write mostly whatever words I want in this space so I’m going to keep doing that.

So anyway, here’s the video of Amber being a delight, and then a small, not-as-scary-as-it-could-be peek into my head. Enjoy. Or don’t. I’m not here to tell you what to do.

Real Amber: Things have been crazy!

Head Amber: We might not talk about Meghan Markle right now, but you know goddamn well I’m talking about it with everyone else.

Real Amber: Here are some things about the movie Cats.

(And then they high-fived because I’m in charge.)

Head Amber: I hate Trump so much, but I do it with such glee. Don’t you wish you could like hating Donald Trump as much as I do? Remember that time I called him a “raggedy bastard”? You loved that.

Head Amber: Whoever picked Barry Manilow as the first singer was not in middle school in 1993 because otherwise, they would not have missed the chance to throw Sting in there, and create a mini-reunion for this f*cking banger.

Head Amber: That was nice of us to pretend Dr. Phil is a “psychologist.”

Head Amber: This checks out.

Emily, Stepping In: That is AMAZING. But you definitely said that wrong because there’s no way we actually have all of those pageants. Like Miss America is in actuality Miss USA because it’s only open to U.S. citizens because the U.S. has some real delusions of grandeur and imperialistic tendencies so we just assume we get to be all of America, but we can’t actually have all of those different pageants. It’s nuts.

Emily, Basically Arguing With Herself At This Point: Wait, so those are all actual pageants that we hold each year? And I’m assuming there are also feeder pageants for the various Miss States that compete in Miss Whateveritis?

Emily, Realizing This Whole Thing Is Getting Away From Her: Because yes, it is important that people of color are seen as beautiful and attractive because we’ve consistently treated only white people as being desirable, and the racism is still very much a real thing. BUT maybe we could have competitions for women that aren’t based on physical attractiveness? And yeah, I know, they’re supposed to have poise and talent or whatever, but let’s get effing real, Donald Trump’s pageant isn’t allowing any “non-tens” to compete. Which actually brings up a fairly concerning point: we’re rightfully celebrating the fact that black women have won these prestigious competitions, but Donald Trump owned three of those motherf*ckers until 2015. Which means that we’re celebrating the fact that women of color are advancing in ways that have been sanctioned and shaped by a guy who actively attacks women based on their looks and values them as such. Can we rightfully call that an improvement? I don’t want women of color to be seen as not desirable, but surely there are better ways of going about it than “allowing” them to be seen as nothing more than their looks the way these competitions do. BUT then again, if women want to compete, I’m not here to tell them not to, I’m just saying that maybe if we spent as much money and energy on encouraging girls to compete in science and writing and athletic events as we do valuing their looks, we maybe could have cured cancer by now. DO YOU KNOW HOW MUCH TIME I SPEND TALKING AND THINKING ABOUT MY PORES? I HAVEN’T EVEN STARTED STUDYING FOR THE CPA, BUT I’VE SPENT HOURS RESEARCHING WHAT LASERS CAN REMOVE MY BODY HAIR THE BEST. WHY AM I BUYING EVEN MORE HAIR DYE WHEN I COULD HAVE BEEN WRITING A F*CKING NOVEL? ALL SO I CAN SATISFY THE SOCIAL REQUIREMENT THAT I BE SEEN AS ATTRACTIVE? EVEN THOUGH I KNOW THAT THE SOCIAL SYSTEM IS A RACIST, IMPERALISTIC, PREDATORY, CAPITALISTIC ENDEAVOR? WE’VE DECIDED WE CAN IDENTIFY MISS UNIVERSE EVEN AS WE CUT FUNDING TO FIND OUT ABOUT THE ACTUAL UNIVERSE. WHAT’S WRONG WITH US?


Emily: Yeah. Let’s get some weed too.