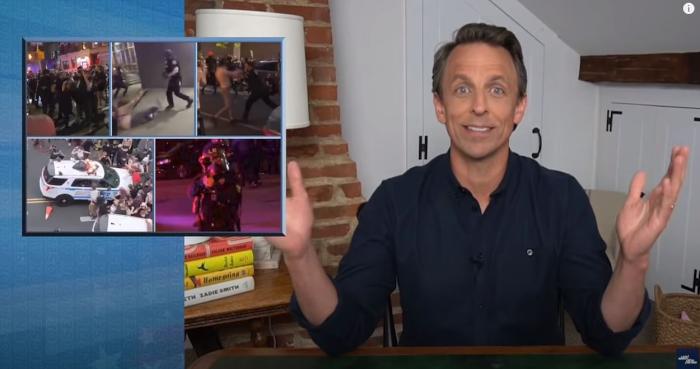 So for starters, I’m a middle-aged white woman (obviously), which means even if I don’t totally f*ck up talking about the recent protests over George Floyd’s murder by the Minneapolis Police Department (and the many, many other cases of unarmed black people being killed by cops) and the police violence that escalated the protests, I probably shouldn’t be the one doing the talking. I know this, and I’m still doing some talking because I’m trying to use my Karen only for good.

In that vein, I’d like to point out that if you’re a white person who wants to speak out about the protests and the police’s violent reaction to them, try to do it like this.

Putting it on a few bad apples ignores the reality that there’s a predatory system, with a history of police misconduct, built on a legacy of racism and exploitation, that elevates the comfort and security of white people over the health and safety of black people.

I had a really hard time deciding to transcribe that particular line because there’s so much good, good sh*t in that video. Seth Meyers was given a shot at Saturday Night Live because he’s a good looking straight, white dude, and he then got to host Late Night because he’d done such a good job of being a good looking, straight, white dude. But knowing that, he used his privilege to hire Amber Ruffin, the first female, black writer for a late-night network talk show, back in 2014 (which is both admirable and sad in so many ways. It’s one of those “good on you” for doing it, but also how could that possibly be a thing that hadn’t happened until six f*cking years ago? Also, white dudes, this is how low the bar is set for you. Beat that). By hiring Ruffin, he was able to include a voice that isn’t well represented on late-night TV, and her input helped shape the show and the show’s editorials. So yes, if you have a platform, listen to black people when they talk to you about racism and then speak out about the systemic racism that leads to things like Floyd being suffocated to death for nine minutes while three cops look on. Or better yet, do this.

White people speaking out about racism should only happen in cases where black people are unable to do it themselves. If your racist uncle won’t listen to Amber Ruffin, then you have to talk to him (or, if you’re me, you have to try to talk to him until he blocks you on Facebook, moves to Kentucky, and tells half of the family that he never wants to talk to the other half again. The upcoming Chambers Family get-togethers (funerals really) are going to be a blast next year). But those are the only times. When you need to take other white people to task for fucking up so bad. And what you should absolutely not do is this.

Pelosi asked about Trump’s Bible photo op last night. She goes and grabs her own bible and is now reading from it. pic.twitter.com/F64v4JFBH6

WHAT THE F*CK, NANCY. What are you doing? You’re the goddamn Speaker of the House during the middle of three man-made Biblical f*cking plagues, and you’re doing photo ops to troll the President? The supposed leader of the country spent the past few days hiding in his basement while the country suffered under wide-scale police violence, an economic recession and a pandemic, and this is what you’re responding to? And don’t tell me that you’ve responded to other things too. I understand you can send more than one tweet. I’m saying, don’t do this sh*t. Being bitchy to the President (which god knows I love) was funny and refreshing three years ago because it exposed Trump as a child and threw him off his message. But this sh*t isn’t cute anymore. We don’t need sassy sunglasses. We need someone to be in charge.

And before you start yelling at me about how we always expect Democrats to step in and save Republicans from themselves, don’t. I’m not telling you you have to lead the country because Trump won’t. I’m telling you not to pull his stunts in the middle of multiple crises WHEN WE DON’T HAVE ANYONE IN CHARGE. NOW IS NOT THE TIME FOR A SICK CLAPBACK.

Or at the very least, for every Insta you post showing up a dangerously incompetent maniac, also donate to the protesters.

← Carole Baskin Now Owns Joe Exotic's Zoo But Not Its Animals | In the Wake of his Blackface Controversy, Jimmy Fallon Finally Changes His Tone →