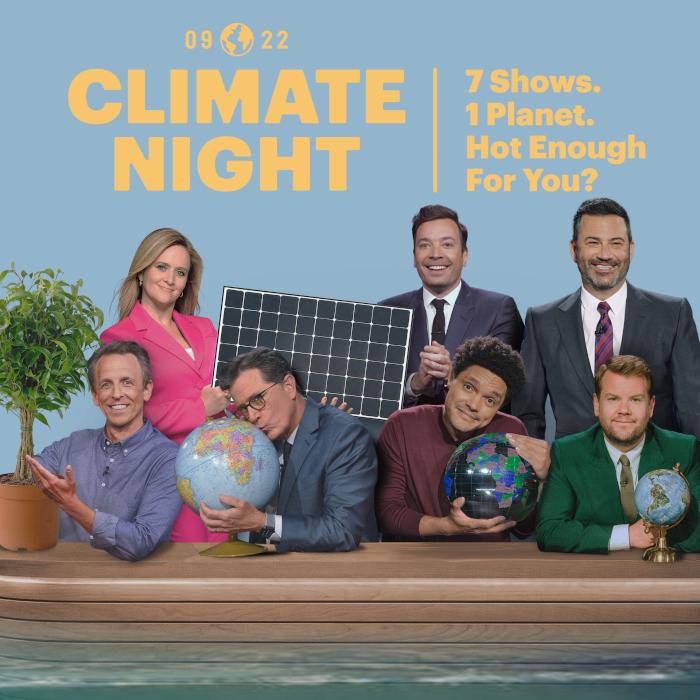 Late Night Round-Up: Who Climate Changed The Most?

Climate Change! You didn’t want to talk about it twenty years ago, and now it’s much too late. There are advances made in climate science every day. There are also monumental floods, devastating storms, and blistering wildfires. How do we get the message out to the world that change needs to happen? We enlist an elite team of late-night talk show hosts, of course!

Last night, Samantha Bee, Stephen Colbert, Jimmy Fallon, James Corden, Trevor Noah, Jimmy Kimmel, and Seth Meyers all focused on climate change. Trump jokes and karaoke sessions were cast aside. OK, there were still Trump jokes, but that’s just a given at this point. Although it feels too little too late, it was a pretty incredible feat. Especially given the various networks’ usual lack of cooperation.

To kick things off, one of my favorite bits of the night involved Seth Meyers and James Corden. They have pretty great chemistry!

Now, onto the segments!

Stephen Colbert:
Colbert had a conversation with Mother Earth herself. Not only is the conversation hilarious but it is also informative. Yes, that’s the goal, but Colbert has succeeded in that area for years. In my view, when the jokes are the message, the message is that much clearer.

A bonus for this clip is that we got time with the multi-talented, and always stylish, Jon Batiste.

James Corden
Corden sat down with Bill Gates to discuss climate change. As he quickly points out, Gates isn’t currently trying to escape earth in a penis-shaped rocket like some other billionaires. What follows is an important discussion about Gates’s new book about climate change and what we can do to combat it. It is Corden at his most sincere, which is very refreshing.

Trevor Noah
On The Daily Show, Noah focused on the less discussed effects of climate change. Space travel, turtles, the Taliban winning in Afghanistan, all are affected by climate change advances. I love this tactic. It’s been abundantly clear that most people have taken an “it’s not affecting me” stance. Hopefully, this will change some of those minds.

Seth Meyers
Meyers devoted his Closer Look segment to climate change and a pretty fantastic Bernie Sanders impression. These segments are always incredible. I’ve said it before, but Meyers has a soothing “daddy” voice that just… makes a lot of this information easier to handle.

Samantha Bee
Bee took time to discuss sewage. This is another important yet often undiscussed topic. That’s what happens when discussions of infrastructure are constantly pushed to the side. Couple this with human stupidity and you’ve got a very serious problem.

Jimmy Kimmel
Kimmel sat down with climate scientist Dr. Katharine Hayhoe in one of my favorite segments of the night. Dr. Hayhoe and Jimmy focused on talking to those pesky people in your life who don’t believe in climate change. There are some very helpful tips in broaching the topic with those who disagree with … science. You can even use the Bible as your source! I know!

Jimmy Fallon
Lastly, Jimmy Fallon had an incredibly informative chat with Dr. Jane Goodall. They talk about trees. Simple enough. You’d think this would be more at the forefront of conversations. Trees are important, people!

← Watch: School Board Meetings Are a Trip These Days (and Brian Williams Delivers a Great Zinger) | Bolsonaro Without Trump: Infectious Vector From the Tropics Strikes the UN Meeting! →