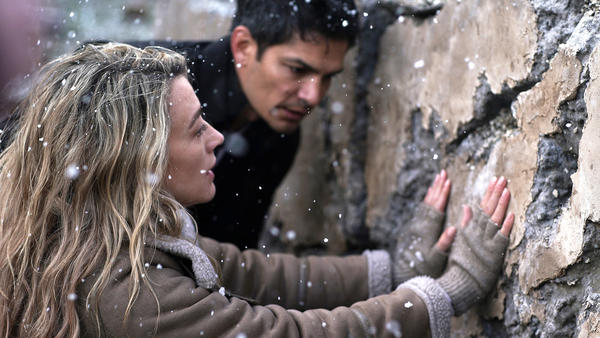 'La Brea' Starts to Get Desperate, Which Is Good News For Us

(Publisher’s Note: The site is experiencing technical difficulties, which is why there are no images on this post, and why there is a shortage of posts today. We hope to return to our normal publishing schedule tomorrow.)

We’re at the point in the season where I think it’s possible that La Brea might get next-level good/bad, where the original topside plan to pilot a drone into the sinkhole and rescue everyone has been ruled out (now that the sinkhole has closed). It’s going to call for the series to think more creatively to find ways to generate drama and keep hope alive for those stuck in 10,000 B.C. Desperation leads to wildly implausible storylines, and nothing could be better for a wacky time-traveling sinkhole series like this.

To wit: A snowstorm in 10,000 BC Los Angeles with hurricane-force winds! It arrives just as the sinkholers have voted to exile Eve and Cop Lady for sabotaging their efforts to fly out of the sinkhole before it closed up last week. Before they are exiled, Cop Lady seeks out her son, Heroin Guy, to explain to him why she killed his father/her husband. Heroin Guy, for some reason, had sought shelter from the storm underneath a pile of concrete rubble, and naturally, it caved in on them, giving them some time to talk privately while the others figured out how to rescue them.

She didn’t kill her husband out of self-defense, as Cop Lady had previously claimed. Her husband was a crooked cop, who was dealing drugs with Heroin Guy. When he got caught, he had planned to pin the entire thing on his own son, Heroin Guy, and Cop Lady killed him to save her son from a lifetime of prison. Wild!

Elsewhere, Josh and Riley drove over to an 18-wheeler that had been stranded a few miles away to fetch some tools to help rescue Cop Lady and Heroin Guy. Josh was furious at his mother for sabotaging the rescue attempt, but Riley tried to talk some sense into Josh about how his mother was only trying to protect him. Riley and Josh also almost kiss, but the snowstorm lifted just as their lips were about to touch, and Riley made for the exit. That ship that literally no one cares about will have to wait a week.

Meanwhile, Eve and Doctor Guy come up with a plan to rescue Cop Lady and Heroin Guy by MacGyvering an explosive device using gunpowder from a bullet and a defibrillator. It works! It blows a hole in the rubble big enough to allow them to escape before it crashes in on itself. Heroin Guy and the rest of the sinkholers are so thrilled that they allow Eve and Cop Lady to stay, as long as Cop Lady gives up her gun to Doctor Guy.

Stoner Guy also surmised — since he and Heroin Guy found a trunk full of gold from the Civil War era — that there must be more sinkholes opening up from different periods of time, meaning they might be able to return home, although maybe not in their own time. This could be interesting if we see more people from different eras falling into various sinkholes.

Ty, who was knocked out by Veronica last week, is rescued from a snake this week by the Native woman who was the leader of the Handprint Community. They talk it over and get along famously. The Native woman says there have been other visitors from other sinkholes, which is how she knows how to speak perfect English. She and Ty forge a friendship.

Topside in the present day, Rebecca Aldridge had told Gavin last week to “go back to the beginning,” and cryptically mentioned the date November 16th, 1988. Gavin figured out that was around the time he was adopted, so he goes to the woman who found him before he was adopted. She told Gavin that he was walking with another woman at the time. Gavin had no recollection of this other woman, but he tracks her down. I don’t know why Aldridge didn’t just tell Gavin that woman’s name instead of sending him on some sort of scavenger hunt, but when Gavin and Sophia arrived at this woman’s house, they found a giant Handprint on a structure on her property.

I guess the woman that Gavin was walking with when he was 12 before he was adopted is somehow connected to Handprint Community 10,000 years in the past. What?! This is some incoherent Manifest bullshit, and I love it. Also, we should note that Gavin had a vision of Diana’s funeral in the sinkhole and had to break the news to Sophia — who was engaged to Diana — that she had died. Sophia was heartbroken.


← Aaron Rodgers Fined by the NFL; Shailene Woodley Defends His Penis Size | Review: 'The Harder They Fall' Is a Blistering Tale of Revenge Featuring an All-Star Cast →