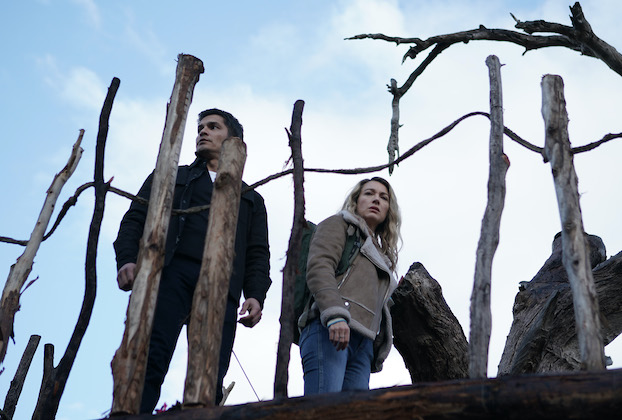 La Brea continues its streak of solid episodes this week with one that introduces new people, a new mystery, and the ability to alter time. Finally, time shenanigans! Do they make sense? Let’s dig in.

Eve and Levi take their crew — Riley and Josh (who have a blossoming romance), Scott the Stoner, and Lucas the heroin guy — into the Handprint fort community to investigate, and they immediately stumble upon a dead body that, again, looks very weird, as though killed by electrocution and a malicious Instagram filter. 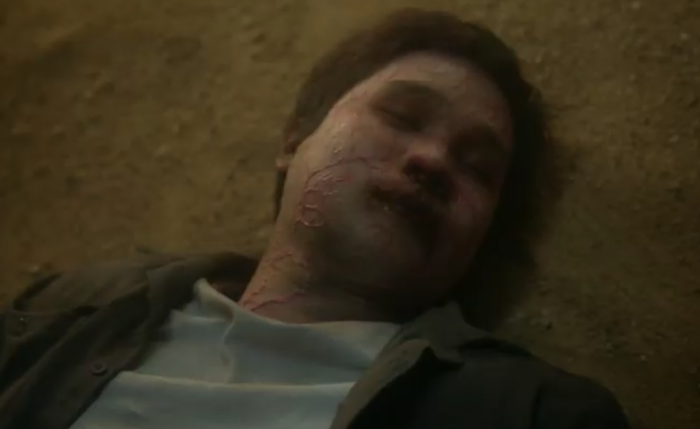 The inhabitants of the Handprint community, however, soon return, and they want to kill now and ask questions later. They start unloading their arrows at them, and for Eve and Co., there’s a lot of scrambling around the fort community trying to escape. Lucas and Scott are briefly apprehended and tied up, which is when they also learn that the Handprint community speaks perfect English, which is bizarre because English did not yet exist. Eve and Levi are assisted in their efforts to escape by a group of kids — or specifically, one kid — who also speak English, and who are older than three years old. It therefore wouldn’t make sense if they were from the exploratory group who got lost in the Mojave sinkhole three years prior (unless the Mojave sinkhole fell into a time period several years before the La Brea sinkhole).

The origins of the Handprint community — where are they from? And how long have they been there? — remain a mystery, as does why the leader of the community told the Old White Bearded Man (whose name is Silas) to stand down and let them go when he had Eve and Co. dead to rights? Is she native? Scott — the anthropologist — suggests they could be Tongvans, although my research suggests that Tongvans only date back 7,000 years.

Eve and Co. have a hell of a story to tell once they get back to camp, where another mystery is resolved. Thanks to Ty’s attempts to get Lilly — the girl who didn’t speak — to open up, we learn that Veronica is not actually her sister. Lilly was abducted by Veronica and her father (who was mauled by wolves) topside, and Veronica has been working double-time to silence her. When Ty finds out, he questions Veronica, and she runs away. Where is she going to go? They’re stuck in 10,000 BC!

Speaking of which, Lucas continues to harass Scott over the $250,000 in heroin of his that Scott buried (but doesn’t remember where). Lucas is very adamant about retrieving the heroin because the dumbass somehow believes that he’s going to be able to return to the present day undetected with a suitcase full of heroin. It’s not like he can fit it into his pockets. Does he not understand that, if he makes it back to the present day, he will immediately be searched, researched, and questioned? It’s not like the feds are going to just wave him by with a suitcase full of drugs. He can probably also earn considerably more than $250,000 by sharing stories of his experience living in prehistoric times! No one cares about the heroin, Lucas, unless it’s to barter with the Handprint community.

Meanwhile, topside, Gavin learns that not only is he going to pilot the drone* into the La Brea sinkhole, but that he’s going to do it that very night. Why the rush? Dr. Rebecca Aldridge explains that they have to fly in that night because the sinkhole is closing. How does she know that? Because her people found a note in a bottle left by Eve 10,000 years ago in which she wrote that the sinkhole was about to close, a letter that we see Eve writing.

Are there no other letters? Is the fact that there aren’t any more letters proof that Gavin rescued Eve? Otherwise, she’d write more letters to leave, right?

The time conundrum reminds me of when my son was about 5 or 6 years old. I had promised on the way into a drug store to buy him some M&Ms, but he had misbehaved, so I told him he couldn’t have any. Upset, he told me that when he grew up, he was going to invent a time machine and go back and change his behavior so that he could get the candy. About 10 seconds later, however, he burst into tears because it had dawned on him that he hadn’t invented a time machine in the future, because if he had, he’d be eating a pack of M&Ms right then. He was devastated, not about the loss of the candy, but because he understood that his future self hadn’t been able to build the time machine.

The point is: Gavin only has hours to pilot the drone into the sinkhole, and there’s a very good chance the sinkhole will close while he’s down there, trapping them all forever (or at least until the next sinkhole opens up).

Next week, there’s some more timey-wimey business, as they have found the remains of Levi’s drone in the present. Maybe they can figure out how to fix it based on the remains of the drone 10,000 years later and send a message into the past? Also, it appears that Gavin will somehow be able to communicate with Eve across time, which must mean they have the new Facetime!

*(I know that some folks took issue last week with the fact that I continue to call the aircraft a drone because drones are unmanned. My research, however, suggests that the definition has evolved; a “drone” also describes a type of aircraft that can fly horizontally with or without a pilot).


← 'The Daily Show' Has Everything You Need To Know About Kyrsten Sinema | The New Trailer For Pixar's 'Lightyear' Takes Us To Infinity And ... →