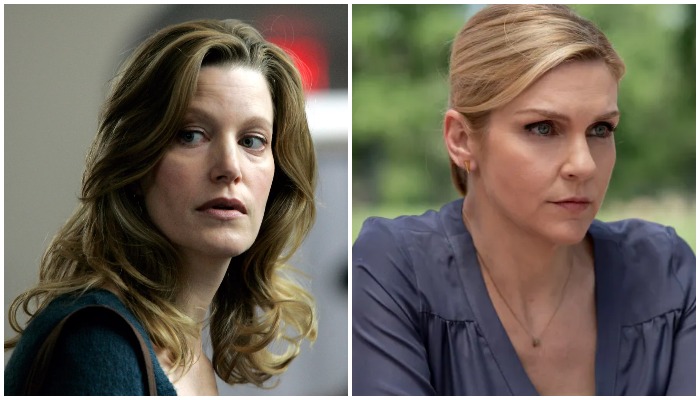 The biggest issue in the five seasons of Breaking Bad had nothing to do with the precise writing of the series, the meticulous set design, the blistering performances, or the impeccable direction. It had everything to do with a fan community that unfairly turned on Skyler White for being the moral compass of the series. As Walter White went from anti-hero to pure villain, Skyler White — at times, anyway — attempted to curb his ambitions, call her husband out on his bullshit, and put the brakes on his schemes. Her first priority was her family, and for that, the fan community turned on her. She was the buzzkill. The nag. The emasculating and unsupportive monster. Skyler White was not the victim of bad writing; she was the victim of a misogynistic fan community.

Conversely, while Better Call Saul’s Kim Wexler initially seemed to fulfill a similar role — the naysing rule-follower of the series who once upbraided Jimmy and nearly dumped him over his squat cobbler scheme — Kim has evolved in surprising and fascinating ways. By following a sort of moral utilitarianism — the ends justify the means — Kim is not only the moral compass of Better Call Saul but increasingly the corrupting force behind Jimmy McGill.

Kim Wexler is, in some ways, the Walter White of Better Call Saul, only instead of selling meth, she’s promoting and participating in the unscrupulous schemes of Saul. Walter White justified his greed and ambition by consistently arguing he was doing it for the family, but Walter’s rationale was hollow and empty (“Someone has to protect this family from the man who protects this family,” Skyler once rightly said to Walter). Kim’s motives, however, are more pure and altruistic: “Saul Goodman” — the brand she has had a hand in creating — can fund her pro bono work, and Kim Wexler is prepared to go to any lengths to give herself the opportunity to provide quality legal services to those who could otherwise not afford it.

Even when Skyler White went along with Walter White’s plans to shield her children from understanding their father’s true nature, she did so begrudgingly. Kim, as we are starting to realize, is the mind behind Saul Goodman. She’s the one pushing the loud outfits, the big office space, and the flashy car. She’s essentially the marketing and brand director behind Saul Goodman, and from what we can gather from the Kettlemans’ scheme and the efforts to destroy Hamlin to collect the Sandpiper settlement, she’s also much of the brains. The pivot in the sixth season of Better Call Saul is that — despite everything we know about Saul Goodman from Breaking Bad — it appears to be Kim Wexler who is pulling the strings while Jimmy McGill at least wants to be the guardrail, the one eager to protect Kim from her own corruptive influence.

But even Jimmy sees the purity in Kim’s motives — the joy that helping others brings her (“It was the best day of my professional life”) — and he can’t help but go along with her schemes. Jimmy, of course, is not innocent: He’s been fueled by pride, the rejection of his brother, and his inability to win the respect of the establishment. But make no mistake. It is a partnership, and Kim Wexler is just as responsible as anyone in shaping the shady con man Jimmy McGill into the criminal mastermind Saul Goodman.

Don’t be surprised to learn, however, that Kim gets in over her head. When Saul advises Walter to take out Jesse, it may be because Kim is whispering advice into his ear. Why, after all, should the casualty of one meth dealer stand in the way of a pro bono outfit that can provide a better life for hundreds? But also don’t be surprised to learn that, if Kim gets in over her head, Saul Goodman breaks it off and sacrifices himself not just for Kim, but for the pro bono practice that motivates her.

← What, Like You Didn't Need Some Golden Retrievers Looking After Some Ducklings Today? | 'The Unbearable Weight of Massive Talent' Captures the Many Facets of What Makes Nicolas Cage One of the Greats →