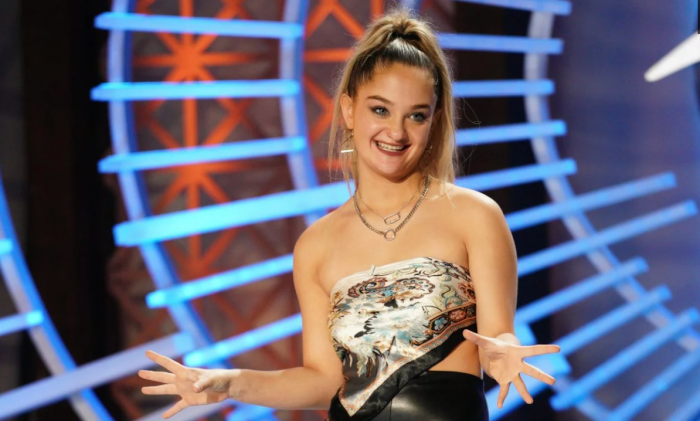 And we thought Sean Spicer appearing on Dancing with the Stars — where the ABC network essentially laundered egregious lies and white supremacy — was bad. Now comes Claudia Conway, the daughter of two of the nation’s foremost grifters, not only appearing on American Idol but advancing past the auditions and into Hollywood round.

Do you know what’s even grosser about that? Kellyanne Conway — all supportive and motherly — appearing on camera to congratulate her daughter.

Claudia gets a surprise from her mother, @KellyannePolls!

"Remember, honey. Winners are people who are willing to lose."@claudiamconwayy | #AmericanIdol pic.twitter.com/paW0YcO9o8

Meanwhile, in another clip, you’ve got George Conway crying on camera while saying “I couldn’t imagine anything that would make her happier than doing this.” *cough* bullshit *cough*

So, what? We’re just going to ignore the accusations of physical and emotional abuse leveled by Claudia against her mother over the last 8 months? We’re going to ignore the fact that Kellyanne Conway resigned from her White House position after allegations of abuse surfaced last year? What about three weeks ago when Kellyanne Conway posted a topless photo of her daughter onto social media? I understand that all of this was taped in the fall — after Kellyanne’s resignation in the wake of abuse allegations, but before Claudia released the horrifying video footage — but what? There was no other edit available? Maybe one that excised George and Kellyanne from the narrative?

I guess not. We’re just going to pretend that Kellyanne Conway is the perfect pageant mom? The same woman who stood by the former President’s side through all four years of his Presidency? Who defended him after Charlottesville? Who defended his use of racial slurs to describe COVID-19? Who spent years belittling and undermining allegations of abuse by other women against the former President?

American Idol is playing a very dangerous game here. Not only is it super-gross that the singing competition is laundering George and Kellyanne’s abuse and creating a new, wholesome, family-friendly narrative for one of the most outspoken defenders of a President who promoted white supremacy, but they’re playing with fire by generating a situation for which they will almost invariably have to apologize. And to do this on the same weekend that the host of their most popular reality franchise, The Bachelor, had to step aside for defending the racist past of one of its contestants? I mean, what the hell are you thinking, AI? Are Claudia Conway’s TikTok fanbase and America’s morbid curiosity worth it?

This is going to end badly, for both Claudia Conway and American Idol, which will not be able to control the narrative coming from Claudia Conway’s TikTok feed. Unfortunately, I feel like George and Kellyanne Conway — the griftiest grifters of them all — will come out of this as the appalling winners.