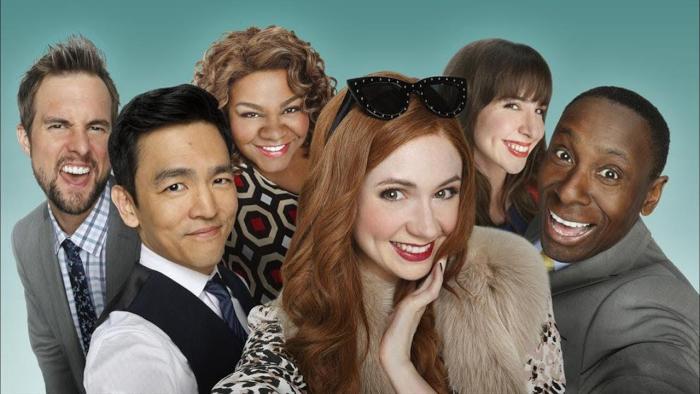 The history of television is littered with shows that were canned far before their time. Everyone has at least one series that ended after one season (or even less than one) that they treasure dearly and will bemoan its premature end at every possible opportunity. Consider the history of potential masterpieces we never got to see live up to their early potential: Terriers, Rubicon, Wonderfalls, Kings, and John from Cincinnati, to name but a few of my personal favorites.

Perennial Pajiba favorite John Cho has more than a few one-season wonders under his belt. The future Spike Spiegel was in the short-lived adaptation of Anthony Bourdain’s Kitchen Confidential that starred Bradley Cooper and lasted four episodes. He was one of the leads of ABC’s much-hyped (and very expensive) sci-fi drama FlashForward, which concluded with a cliffhanger that some fans are still very salty about. Remember the Matthew Perry sitcom Go On? No? Well, he was in that too. But perhaps no prematurely canceled John Cho series makes us more mournful than Selfie.

Created by Emily Kapneck, who worked on Parks and Recreation and created the Nickelodeon series As Told by Ginger, Selfie starred Cho as Henry Higgs, a marketing image consultant who becomes the semi-unwitting advisor to Eliza Dooley (played by Karen Gillan), a social media-obsessed co-worker having a quarter-life crisis. After discovering that her social media popularity does not translate into offline friendships (thanks to an unfortunately viral vomiting accident), she asks the more anti-social and skeptical Henry to help her find a way to be more present in her daily life. Yes, it’s Pygmalion with a 21st century filter.

Selfie premiered to some skepticism, mostly because of its title and premise. Like Crazy Ex-Girlfriend and Cougartown, sometimes the name of the series gives potential viewers the wrong impression. Early trailers made Selfie seem, let’s be honest, a touch insufferable. It’s hard to get people to not feel exhausted by stories of internet fame and influencer narcissism, even if that’s not what the narrative is really focused on. Even by 2014, we were sick of the term ‘selfie’ and all the millennial buzzword cliches that are now beyond parody. Truly, Selfie was just a great romantic comedy smothered by a high concept marketing promise.

You look back on those canceled shows and wonder what could have been done differently, but Selfie knew what it was out of the gate and had a kind of consistency that should have made it irresistible. For all of the easy jokes that come to mind with its set-up, Selfie had a remarkably nuanced and empathetic understanding of social media and those who become entwined in its alluring web. Eliza can be self-absorbed and her chronic addiction to internet fame proves hugely irritating to those around her, but the show encourages the audience to laugh with her as much as we laugh at her. She’s also working hard to change, knowing that there’s nothing truly satisfying about a life defined by clicks and an increasingly cruel algorithm. This isn’t to say that Selfie was smarmy in its damnation of social media or online culture. The Luddite Henry wasn’t positioned as an almighty authority over Eliza. Rather, his aversion to such things came from an understanding but somewhat overblown fear of an ever-changing world. While she evolves from being wholly obnoxious to charmingly feisty, Henry learns to let loose and navigate awkward social situations he previously avoided.

A rom com is nothing without chemistry and the leads of Selfie had it by the bucketful. Cho and Gillan were an ideal pairing for the series’ screwball-inspired sweetness which left plenty of space for genuine heat. If you’re a romance reader who loves the ‘sunshine vs. grumpy’ dynamic, then this was the show for you (I also assume you’re a big Roy/Keeley shipper on Ted Lasso.) Even at his most straitlaced, Cho has the charm to spare, and Selfie offered audiences a much-needed reminder that he’s one of the most astoundingly underrated leading men in modern American entertainment. When he pulls Eliza close to his body, goddamn, you feel it. Even though the two never kissed — boo — there were enough romantic moments to keeps fans swooning. Guys, Henry literally rides in on a white horse at one point! There’s confessional karaoke! And an elevator naked flirting moment!

The fan fervor for Selfie was mighty. A #SaveSelfie campaign began, appropriately enough, on Twitter once it became clear that the ratings weren’t good enough for ABC to justify keeping it on the air. The pre-requisite Change.org petition garnered over 65,000 signatures. You could even buy #SaveSelfie t-shirts. It sadly didn’t work, and the plug was pulled after seven episodes, but ABC did put the rest of the season on Hulu and did so much quicker than expected thanks to that fan enthusiasm. Both John Cho and Karen Gillan have talked about the love they had for Selfie and how frequently they are asked about the series by fans to this day.

Sadly, Selfie is tough to track down these days unless you’re willing to twist a few rules. Ahem. Mostly, it stands as a reminder of what could have been, another small but mighty show cut down before it could fully blossom, and one that a handful of fans will forever cherish. Hopefully, Cho and Gillan can reunite one day to let that chemistry sizzle once more. Damn you, terrible title. We could have had it all…

← Review: Netflix's 'He's All That' Called Me Old, Then Tried to Convince Me The Skater Boy Was a Loser | 'Ted Lasso' Episode 6 Recap: Pricks and Fish Pies →