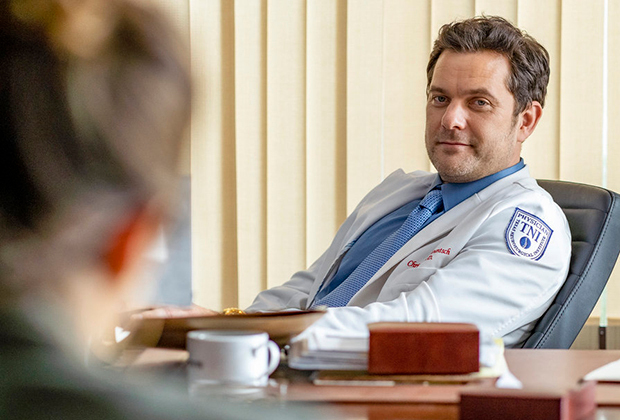 Back in my day, the only Dr. Death we knew was Jack Kevorkian, the man who helped pioneer physician-assisted suicide (not to be confused with Erroll Morris’ documentary about Mr. Death, the Holocaust denier who designed execution devices). As such, I actually didn’t know anything about Christopher Duntsch (Joshua Jackson, RIP), also known as Dr. Death because of the trail of dead and injured the spinal surgeon left behind in Texas during the 2010s.

Peacock’s new series Dr. Death explores the casualties that Duntsch left behind. It also investigates how something like this might have happened, how the medical profession seems to be designed to protect incompetence, and how easy it was for a genuine quack like Duntsch to continue performing surgeries despite the extraordinary amount of medical malpractice. It also tracks Duntsch’s personal relationships — he had an affair with his physician’s assistant (Grace Gummer) while his stripper-girlfriend is pregnant with his baby — and the smarmy charm (and God complex) that allowed him to get as far as he did.

Meanwhile, two other neurosurgeons — Robert Henderson (Alec Baldwin) and Randall Kirby (Christian Slater) — have made it their personal mission to not only ensure that Duntsch never practices medicine again but also put him in prison for murder. The level of incompetence is staggering — Duntsch doesn’t appear to be familiar with even the basics of neurosurgery — and part of what the series is exploring is whether Duntsch is merely incompetent or if he’s also a sociopath who purposely botches surgeries. That investigation takes us back to his college football days, where he lacked the ability to properly read a playbook, and his days in medical school, where he seemed to be a star pupil despite a lack of skill in the operating room.

Henderson and Kirby ultimately ensnare the authorities (here represented by AnnaSophia Robb’s assistant U.S. Attorney) to help them neutralize Duntsch, even as he continues to move from one hospital to the next without running into problems being granted surgical privileges despite all of the people — patients, nurses, doctors, and professors — familiar with his handiwork.

The premise of Dr. Death reads like your standard true-crime series, but there’s an addictively trashy quality to this one, not unlike the two seasons of Dirty John that aired on Bravo/Netflix. The writing is a little thin, but it’s nothing that can’t be papered over by the committed, TV-movie performances from Jackson, Baldwin, and Slater, who goes full Kuffs in this one, in addition to the solid supporting cast. That includes Kelsey Grammer, who plays Duntsch’s med school professor and mentor, and Dominic Burgess, who plays the best friend of Duntsch, who has enough misguided faith in Duntsch to allow him to perform surgery on him. He winds up a quadriplegic.

Ultimately, Dr. Death is as entertaining as it is enraging, although anyone with a history of dealing with inadequate medical professionals may find it triggering (also triggering is the sound that surgical hammers make when striking the spine). There’s definitely a Lifetime movie quality about it, but not necessarily in a bad way: It takes a certain skill to make something this trashy without minimizing the threat of Duntsch and doctors like him; in fact, it’s all the more maddening because it’s so watchable. I found myself shaking my fist at the unfairness of it all more than a few times, but I also couldn’t look away.

← 'Ted Lasso' News Round-Up: Because Lasso Is Life! | In Honor Of 'Escape Room: Tournament of Champions': An Escape Room Movie for Every Mood →