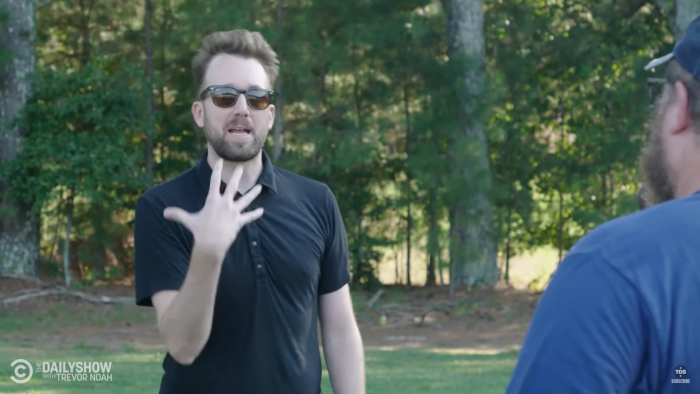 Jordan Klepper Gets To The Bottom Of Anti-Maskers

When a new Jordan Klepper Fingers The Pulse drops, I find myself saying out loud, “Aw, this poor guy.” I know that it has become Klepper’s job to speak to the Trump-Stans and Anti-Vaxxers of the U.S., but that doesn’t make it any less depressing. When you see people who are so firmly rooted in their delusions like the ones Klepper finds with ease, it’s hard not to feel a little bad. Then you hear them talk and things get even worse.

In the newest edition of Klepper’s recurring segments, he visits a school district in North Carolina. Here, a group of parents, and Madison Cawthorn, are protesting school-imposed mask mandates. They also manage to turn the conversation toward Critical Race Theory. As a logical leap for these people, it makes sense. If they don’t understand how masks work, they don’t know what Critical Race Theory is.

As far as Klepper’s segments usually go, the people he speaks to here are quite friendly. There’s usually a much richer air of hostility that accompanies these rallies. Here, they are happy to share every theory and disagreement that they have. When Jordan presents an argument, they either (kind of) politely disagree or cite Satanism as part of their research. Who’s gonna say that Satanism is good?! Checkmate!

All jokes aside, it is pretty frightening how confidently the Satanism angle is presented. Almost every person talks about “research” that they have done and you just know that they are talking about, at best, a quick Facebook Group search. It’s not like Klepper is bringing up anything even politically driven. The points he presents are simple. Yet, every person has an answer, and every answer is absurd.

Next time you don’t want to have an awkward conversation with that Uncle that thinks COVID is a hoax or that masks don’t work, summon the boundless energy and patience of Jordan Klepper. Just don’t summon Klepper himself. he goes through enough as it is.

← The Apple Doesn't Fall Far from the Other Apple: Chris Cuomo Accused of Sexual Harassment | Kristen Stewart is Princess Diana in a New Trailer for 'Spencer' →