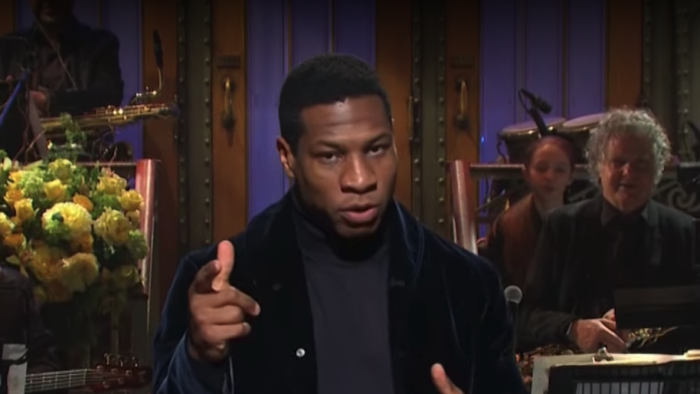 Jonathan Majors Is a Delight as Host of 'SNL'

Dan and Tori have been giving us a lot of sh*t about how harshly we grade SNL skits, so we tried to be a little more generous this week while remaining true to ourselves. In this week’s episode, Majors is (an often underused) joy, but the show itself is inconsistent.

Cold Open — Aidy returns to play Ted Cruz in Ted Cruz Street, a Sesame Street parody about how he had to stand up to Big Bird for advocating for vaccines. Cecily plays the perfect Marjorie Taylor Greene, naturally. Teddy C. spreads a lot of misinformation, and has Joe Rogan (Pete Davidson) makes an appearance, too. It’s all a bit of an overstuffed, unfunny mess. (Watch Here) (Score: 3 out of 10)

Jonathan Majors Monologue — Majors’ monologue is so-so, but he’s a bundle of great energy and charming as hell. (Score: 6.5 out of 10)

The March of the Suitors — An indifferent Queen meets a series of suitors, including a married guy who poses as a prince (Majors) but gets busted by his wife. Punkie Johnson (so good in Love Life) plays a lesbian suitor. It’s not a particularly good sketch, and that it’s at the top of the show doesn’t bode well. (Watch Here) (Score: 3.5 out of 10)

Audacity in Advertising Awards — Hosted by Jake from State Farm and Flo from Progressive, they give out awards like the most “egregious ad of the year,” and “You’re using what to sell what?” There’s also an In Memoriam for companies that went out of business. It’s too long and dumb as hell in parts, but that is also part of its appeal. (Score: 6 out of 10)

Strange Kid Tales — Kenan and Jonathan host a show they hate about parents who tell paranormal stories about their kids. The premise wouldn’t seem to work, but it’s mostly a showcase for Kenan reaction shots, and Kenan reaction shots are the lifeblood of SNL. This is also the Mat skit of the night. (Score: 8 out of 10)

Man Park — An ad for a dog park, but for husbands who otherwise rely completely on their wives for emotional support. Decent. (Score: 6.5 out of 10)

Weekend Update — Musical guest Taylor Swift sang a 10-minute song about her break-up, and that’s Colin’s first joke. Sarah Sherman talks about her first six weeks on the show but manages to make it about making fun of Colin Jost. Sarah has discovered that the key to SNL is to use Colin Jost as a punching bag. The jokes are not great this week, but Che/Jost have a ton of positive energy and it feels funny even when it isn’t. Newbie Aristotle Athari plays a robot who is programmed to do stand-up comedy. You can skip that one, or watch here. Otherwise: (Score: 8 out of 10)

Broadway Benefit — A couple brings their daughter to a stage production that Aidy’s character remembered fondly as a kid, only it turns out that the whole thing is not family-friendly at all. This skit could use some Kenan reaction shots. (Watch Here) (Score: 3.5 out of 10)

Pet Store Ad — Bone Thugs n’ Harmony are now bringing real-ass bones to real-ass dogs at their new pet store featuring only bones and also bonus harmonies. It’s dumb as hell, but not without its charms. (Score: 5.5 out of 10)

Church — A pastor and his wife announce that they are opening up their marriage to the congregation. Pass.(Watch Here) (Score: 3 out of 10)