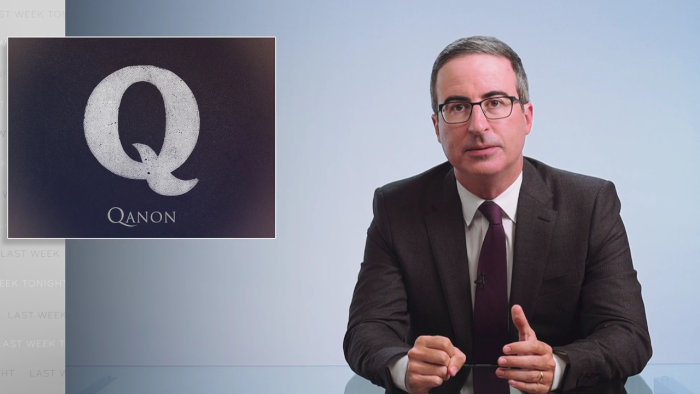 There is a good chance you’ve been made aware of the conspiracy theory QAnon, either through various news stories or by a family member you try desperately to ignore. The theory, which boasts a secret insider that is close to the Trump administration is leaking secrets about “child-molesting criminals led by prominent Democrats,” began in the fringes of the internet and has slowly grown to prominence. It has begun to reach such a popularity that even a recent Republican primary winner subscribes to it, as John Oliver took time to discuss in the latest episode of his show, Last Week Tonight.

After explaining the basics of the theory, going as far as to play a QAnon music video, which Oliver aptly describes as “Horsesh*t,” he spent most of the segment discussing recent Republican primary winner Marjorie Taylor Greene. On top of spouting racist and Islamaphobic remarks, Greene is a believer of the QAnon theory.

Oliver went on to explain how Republican reaction to her candidacy has gone from rightfully dismissive, to warmly acceptive. “Before Greene’s election, top Republicans tried to distance themselves from her,” Oliver explained, “but since her victory, that tone has shifted.” What followed were examples of people like Donald Trump and House Minority Leader Kevin McCarthy proclaiming Greene to be a “winner” and McCarthy even praising her, after having previously referred to her rhetoric as “appalling.”

The segment was eye opening and depressing, but John Oliver’s statement at the end sums it up the best. “Because you can only see Greene as a disturbing anomaly if you ignore the basic fact that when it comes to the modern Republican Party, where they go one, they go all.”