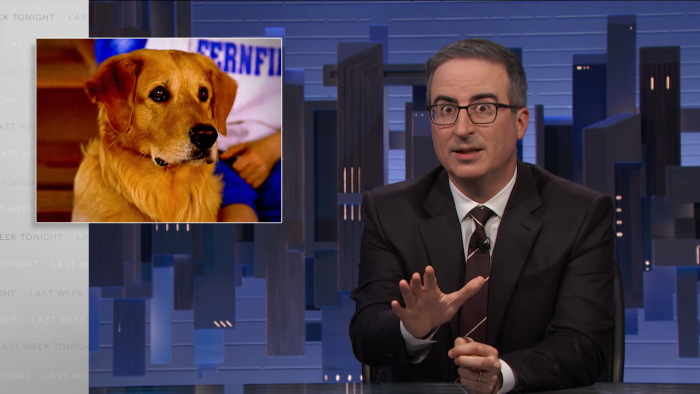 I don’t often get into my age on this site, but I’ll just say it. I am 33 years old. The “Jesus age,” if you will (but they ain’t gonna get me). In 1997, when the basketball film Air Bud was released, I was the target audience. I wasn’t a kid who only watched “kid’s movies.” I saw Air Force One the same summer. So, while I may have been the target audience, I wasn’t just going to roll over and let this film about a dog playing basketball rub my proverbial tummy. Even at that age, something about the movie seemed odd to me.

When I saw that John Oliver devoted an entire web exclusive to Air Bud, I was giddy with excitement. Finally, someone who I trusted would be getting into what makes Air Bud so weird. It turns out I was only half right. Oliver does dive deep into the famed sports movie (it goes Hoosiers, Rudy, Air Bud), but he focuses mostly on the rules of the film. Can a dog play basketball? I get it. It is a strange sticking point. But it is far from the weirdest thing in the movie.

In discussing the rules, Oliver touches on two fairly adult bits of subject matter. Both are relatively glossed over. They involve the main character’s dad dying off-screen, and the “villain” of the film being an alcoholic. He also discusses the Coach of the main character’s team. What he fails to mention is how the coach (played by Bill Cobb) gets his job. It is something that has stuck with me for almost 25 years, and it is the most unsettling part of this motion picture.

Before Bud joins the children’s basketball team, they have a different coach. After a game, that coach is angry with a player who botched a pass. His solution is to pelt the child with basketballs. In this film meant for kids, an adult man hurls basketballs at a child in a darkened gym. It was likely shot in the dark to avoid revealing the kid’s stunt double, but it adds an even more disturbing edge to the scene. Just to show I’m not pulling your dog chain, check out the scene below.

How could Oliver not bring this up?! People get so blinded by the rules that they forget about the children!

I’m not saying John Oliver ignored this terrifying storyline on purpose. I’m just asking questions. But it does raise eyebrows! What else are you ignoring, John?!


← 'RIP Twitter' Is Trending Amid Reports that It's Poised to Accept Elon Musk's Offer | Have the 'Fear the Walking Dead' Writers Completely Lost Their Minds? →