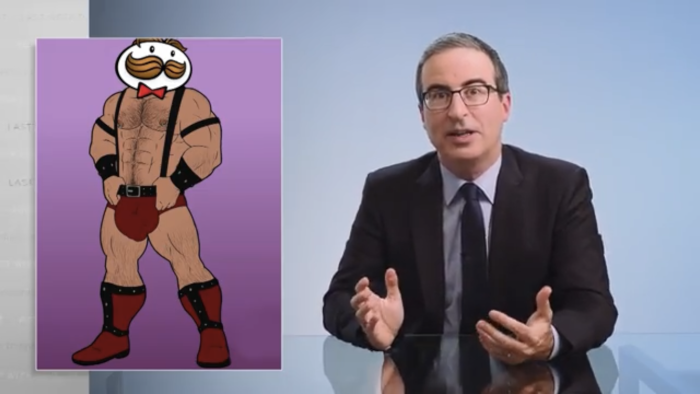 Few people are able to play the long game quite like John Oliver. Just this past season, after months of referring to Adam Driver as a mammoth sex object, Driver appeared on the show to refute his advances. It was one of many in a long list of memorable moments for the show. Soon to be added to that list will be his latest encounter with Pringles.

Several weeks ago, Oliver made a throwaway joke about what the man on the Pringles can (apparently named Julius Pringle) looks like from the neck down. “Is he tall or short? Does he have a lot of body hair or is he completely smooth? When will you be able to tell me what his nipples look like?” It was a fun aside that apparently sparked the imagination of his fans.

This week, Oliver took to his white void for a special, internet exclusive episode to discuss his fans’ response to the joke. People were drawing or finding drawings of what Julius’s body looks like and bringing them to the attention of Oliver. They range from hilarious to downright THIRSTY.

Not only was it great to see Oliver pick up on this bit, but in classic Last Week Tonight fashion, he took shots at Pringles for their lack of potato content and followed it up with a challenge. They reveal what Julius Pringle looks like from the neck down and he will donate $10,000 to Feeding America.

The moment @IamJohnOliver and @LastWeekTonight have been waiting for. In honor of every second John has thought of Mr. P's body, we are donating $1 to @feedingamerica, which happens to be $10K. pic.twitter.com/Ori2jKJ8fz

Look, I’m not here to body shame Julius Pringle. I’m unfortunately just not surprised that the design the company went with is as bland as one of their not-chips. He looks like someone trying to dress as a “hip Santa” at a corporate Christmas party. A real “festive but cool” look. But hey, $10,000 is now going to a good cause and I have a search engine full of pictures I can look at whenever I want. It’s a win-win… for now.