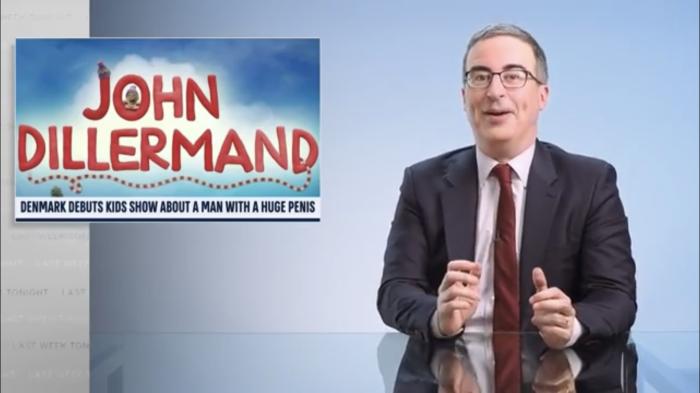 John Oliver Delivers His Most Animated Web Exclusive Yet

There are some reveals that are so silly, yet so shocking, that it’s hard to decide how to react. Do I gasp? Do I giggle? Do I… gigasp (a word I just invented that combines giggle and gasp)? These are the questions I find myself asking after the latest web exclusive segment from Last Week Tonight host John Oliver. You see, it turns out that, in Denmark, there is a cartoon called John Dillermand about a man with an incredibly elastic penis, which he uses to solve all sorts of problems. John talked about it at length (nailed it) and… how do I put this?

Yeah. Yeah, that does the trick!

First, let’s discuss the utter joy that usually accompanies a John Oliver web exclusive because it is on full display here. He is so excited to talk about this cartoon. He’s positively giddy as he shows clips. He can barely contain himself when reacting to news footage about John Dillermand. It is, as always, incredibly infectious. His attitude alone had me gigasping for most of the segment. A segment that drives home the point of the cartoon.

John Dillermand is as far from sexualized as you can possibly be. Is it weird to see a cartoon where a man effortlessly uses his penis as a tight rope? Yes! But it is only so weird because here in the United States, we still live by a puritanical set of values when it comes to … well, sex, but this isn’t sex. It’s something simpler. You could have the show be about a super elastic finger, fingers being body parts that also can’t be used as tight ropes, and it wouldn’t get the same pushback. But if I wanted to, I could still make a finger seem sexualized.

Before I keep putting my elastic finger in my mouth, let me say that what I trigger warned you about in the beginning actually proves my point. Oliver ends the segment by animating his penis in the same silly, unrealistic way that John Dillermand does. There is nothing sexual about it. It’s absolutely gigasp worthy, but if I were a kid, I’d just be laughing. It’s just an insanely ridiculous concept. Like most children’s television.

← No, the Cardboard Beds Aren't to Stop COVID-Spreading Sex at the Tokyo Olympics | Taika Waititi, Sterlin Harjo Bring Us a Slice of Indigenous American Life on FX's 'Reservation Dogs' →