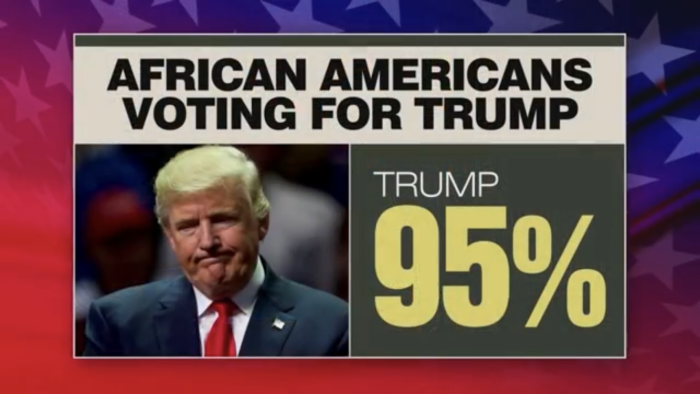 Polling is weird. You have to trust that whoever is conducting the polls is doing so in good faith and that their sample size will be big and diverse enough. Heck, there have also been significant instances where polling did not represent the actual end result (cough2016cough). All that to say I try not to get too excited when Jimmy Kimmel airs clip after clip of Black people in Hollywood saying they won’t vote for Trump.

The bit itself is pretty funny. Beginning with Kimmel nicknaming the president “Fatty Lupone” for his “Evita style performance” from the White House balcony. Trump recently spoke to a collection of people who may or may not belong to the “Blexit” movement (some of whom were paid to be there). The movement was started by Candace Owens, which should tell you all you need to know.

As a self-respecting person of color, I cannot stand Candace Owens and that made the interviews that followed even funnier. If Owens can attempt to make waves by showing Black people who like Trump, Kimmel can do the opposite. Do I think this sketch shows the way most black people will be voting in a few weeks? No. But I also don’t think the people paraded on the White House lawn shows that either.

I know the Kimmel sketch isn’t a real poll. It’s a joke. A bit made for entertainment purposes (I’m, like, really smart, y’all). However, it touches on some real fears I have had for most of the last four years. I’m not as lucky as the people in the sketch who claim they don’t know any Black people who are voting for Trump. I even have Black family members who are happily going to vote for him and it is MADDENING. There’s little I can say or do to change their minds.

On top of that, most of the Black people I know who are voting for him live in the Midwest, which is not very similar to the Hollywood Walk of Fame where the people at Kimmel filmed these interviews. This sketch made me laugh but, luckily, it hasn’t made me complacent. I know that, while the interviews they showed are all of Black people being anti-Trump, that isn’t the case everywhere. Trump may not get 95 percent but he’ll still get some, and that in and of itself is reason enough for me to worry.

I may be thinking about this too hard, but it’s difficult not to take certain things very seriously during this election … and hey, Fatty Lupone is a pretty sick burn.