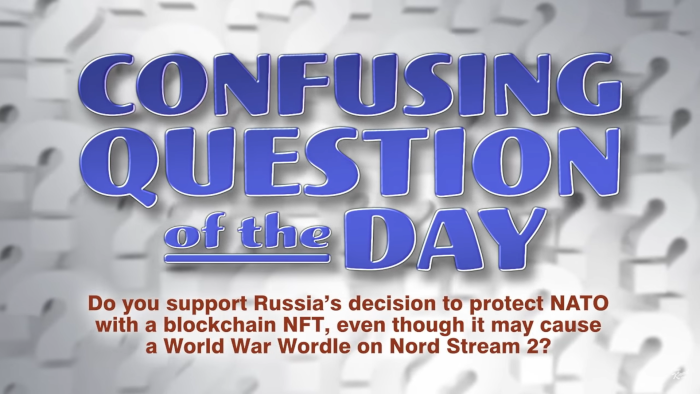 It feels like, every day, there’s something big, depressing, or confusing going on in the news. It’s a lot to keep track of. If you go to Twitter, you’ll find scores of people claiming to be experts on the day’s events, only for them to spout a bunch of nonsense. So, what if, instead of looking for experts on Twitter, you went to the streets? What are people who aren’t hiding behind a picture of a chain-smoking space monkey saying about the news? Jimmy Kimmel sent a crew to find out!

Kimmel couldn’t ask every person an individual question. Where’s the fun in that? Instead, Kimmel mixed all headline-grabbing words you could think of and jammed them into one sentence! Surely people wouldn’t pretend to know something they don’t? I mean, if we’ve learned anything from the creation and flourish of social media, it’s that people will be honest and forthright when faced with something they’re unsure of.

You see where this is going, right?

Not everyone in the video lies. Some just admit to being confused. Others want to wait until they get all the facts straight. You know, all the facts about the thing that doesn’t exist. It’s pretty hilarious. You can see some of them actively searching their brains for answers. They’re bombarded with buzz words, strung together in a way that feels confusing and familiar at the same time. Like Twitter in real life!

At the end of the day, most people don’t know what they’re talking about. It’s important to remind yourself of that sometimes, and this sketch is perfect in that regard. Sure the question is confusing, but so is real life. We may as well have fun with it.