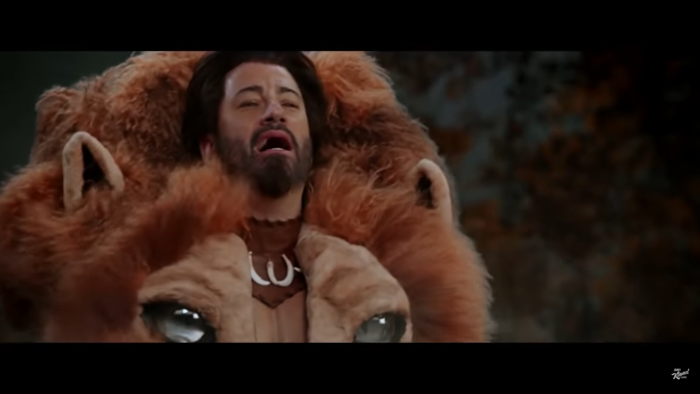 A lot is going on in the new trailer for Spider-Man: No Way Home. There’s also not a lot going on. It seems, to me, that Marvel/Sony are so interested in hiding things that the trailers so far haven’t made a ton of sense. We can all make assumptions about what will happen in the movie or who will be in it. For now, it’s just a Schroedinger’s Spider (nailed it). But I don’t want to be left in the dark. I want to know which of my favorite comic book characters will be in the movie! Luckily, Jimmy Kimmel is here to help.

In the newest episode of Jimmy Kimmel: Live, the eponymous host debuted his version of the new trailer. Does it feature the rumored appearances of Tobey Maguire and Andrew Garfield? No. A Tom Hardy appearance, perhaps? I’m afraid it does not. What it does have is Kimmel himself dressed up like Kraven the Hunter! He slices! He dices! He gives me the first belly laugh I’ve had today.

At this point, I’m more than happy to watch a thousand parodies before the movie is released. If Marvel and Sony want to be like Gandalf and keep their secrets, then I’ll wait patiently. Until then, why not fan-cast with other comedians? Sure we have Michael Keaton as Vulture, but wouldn’t Larry David be great too? I love Alfred Molina, but something about Doc Ock has always screamed Wayne Knight to me. Of course, last but not least, we need some Bruce Campbell Mysterio action! It’s the Multiverse, let’s get weird with it!

Seriously, five bucks says that Dr. Strange is Mysterio in disguise, and if they’re smart they got Campbell to play him. I know they had Gyllenhaal play him before, but that dude’s busy doing (checks notes) Road House? Sure!