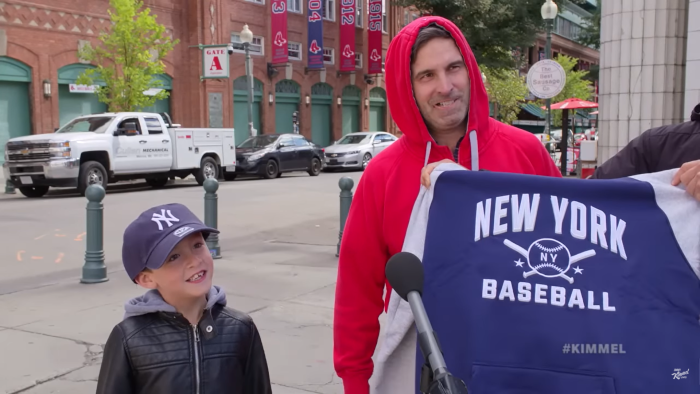 Despite only spending one year of my life in Texas, I have been a Texas Rangers fan for as long as I can remember. It hasn’t been easy, because they are often a terrible team. They’ve been to the World Series twice, in 2010 and 2011, and lost both times. Still, I have never wavered, even when I was living in Massachusetts when the Red Sox won their first championship in over 80 years, a time when suddenly everyone was a Red Sox fan. Bandwagon fans as far as the eye could see, and I never lowered myself to their ranks!

Flip-flopping between teams depending on who’s winning is not exclusive to baseball, but lack of loyalty is highlighted spectacularly in this new segment on Jimmy Kimmel: Live. Members of Kimmel’s crew ventured to Boston to speak with some “diehard” Red Sox fans. They professed their love of the Massachusetts franchise, only to disregard that love under the slightest pressure!

When pressed to wear Yankees gear, under the guise of promoting unity, these fans flipped faster than Liz Truss quit her job (TOPICAL)! Standing outside Fenway Park, these people threw on pinstripes, ate some Manhattan Clam Chowder, and rooted for the away team. It is a misstep of the highest order, one that an interviewed Yankee fan does not fall for.

Pictures last forever! Anyone wanting to take the piss out of these fans need only take out their phone and pull up a photo of them dressed like their sworn enemies. It’s precisely why Jack Nicholson refused to wear a Red Sox hat while shooting The Departed. He’d never be able to live it down!

You’ve got to stick with your own team. Even if they let you down for decades at a time, offering occasional glimmers of hope only to have it all dashed away with one strike left to go on TWO SEPERATE OCCASIONS.