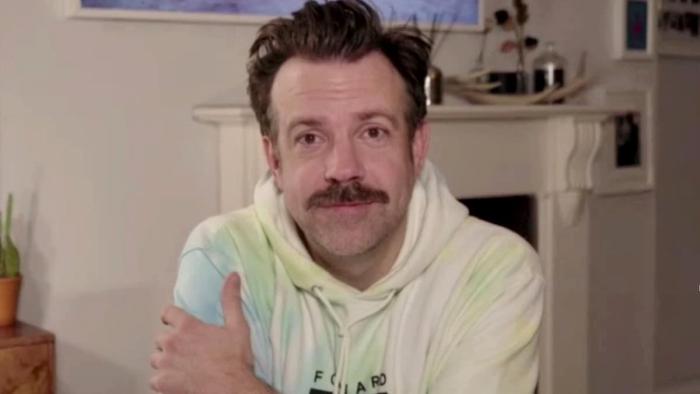 Sometimes I get the sense that maybe Jason Sudeikis is not that dissimilar from his Ted Lasso character, despite a history of also playing douchey characters (until Ted Lasso came along, actually, my biggest association with Sudeikis had always been from his “Two A Holes” character on SNL with Kristen Wii). I guess my thing is this: Sudeikis doesn’t just play Lasso, he also writes Lasso, and if you know how to write a character that has so mastered the art of nice, then you have to understand what it takes to be that nice, and if you understand what it takes to be that nice, why wouldn’t you just go ahead and act that way? Right?

In any respect, Sudeikis gave one of the more memorable speeches Sunday night during the Golden Globes ceremony, although he spent 45 seconds or so in complete shock and unable to say much while also wearing a tie-dyed hoodie. Co-nominee Don Cheadle eventually gave Sudeikis the wrap-up signal with his finger, which Sudeikis could also see from Zoom, and while that might have been misinterpreted as rude by some, Sudeikis had a very Ted Lasso response to it:

“Hey that’s just Kansas City love,” Sudeikis said when questioned about it after the show. Both Cheadle and Sudeikis are from the midwestern city. “If anyone was going to tell me … He knew I’d listen to him. That’s all that is. A lot of people don’t know that he’s an excellent stage manager as well as an a American acting icon. The guy’s got chops, you know?”

That is brilliantly Lasso-esque response. Likewise, he had a generous reason for wearing that hoodie, too. It was a hoodie promoting his sister’s dance studio in New York. “I believe when people that you care about do cool, interesting things, that you should support them, so this is no different than that. I have a multitude of hoodies for a multitude of things that I believe in and support but this one seemed the most appropriate.”

In fact, when a reporter weirdly suggested it was “product placement,” Sudeikis was forceful but diplomatic in his response. “It’s family pride. It’s my sister’s company. I don’t know if you have siblings, but if they do something you believe in, and you encourage them to do it, you don’t refer to it as ‘product placement.’ But we do use a lot of Apple products in our show, so maybe that’s what you are confusing.”

As for what the actual Ted Lasso might think about Sudeikis’ win. “He’d think it was a little too singular for his taste,” Sudeikis said, “but it’s nice that the show garnered attention through its nomination.”

All of this reminds me of a paragraph in James Poniewozik’s piece on Ted Lasso, and why this passage may be the best distillation of the show there is on the Internet:

Being nice, in “Ted Lasso,” is not a naïve denial of the darkness of life. It’s a cleareyed adaptation to it. The series recognizes that nice guys do sometimes finish last. It just argues that other things are more important than finishing first.