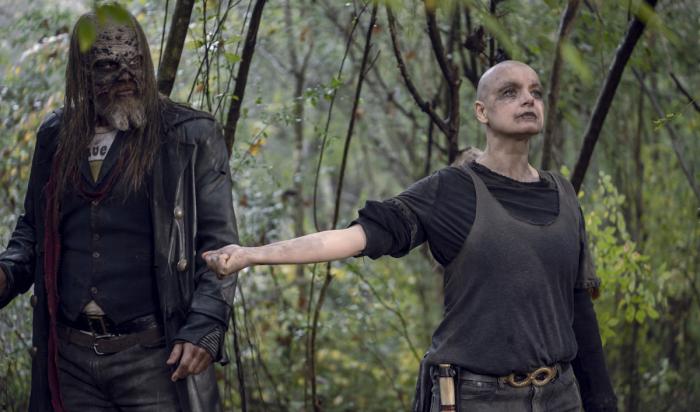 It Was a Really Big Weekend for 'The Walking Dead' Universe

Unfortunately, Brian is away for personal reasons this week, so he won’t be able to cover last night’s The Walking Dead premiere, but I’m going to quickly go over the big developments in the world of The Walking Dead universe a week after that embarrassing Fear the Walking Dead fifth season finale.

On Saturday at the New York Comic-Con, AMC not only announced that The Walking Dead has been renewed for an 11th season, but that Lauren Cohan — who plays Maggie — will return to the series after leaving midway through the ninth season for her own now-canceled series, Whiskey Cavalier. Cohan will not return as a series regular until the 11th season. They also announced that Paola Lázaro would be joining the cast this season as Princess, which is interesting to comic-book readers because Princess doesn’t appear until Michonne heads toward The Commonwealth. We’re not expecting The Walking Dead to fully launch into The Commonwealth storyline this season, and Michonne is actually leaving the series this year, so they’re going off-book a little (though, it looks like Michonne will likely join Andrew Lincoln in the Rick Grimes movies).

AMC also released their trailer for their new The Walking Dead spin-off, which doesn’t yet have a title. It looks a little like a CW show, or Friday Night Lights meets the zombie apocalypse. I actually dig it, and it comes from Matt Negrete, one of the best writers on The Walking Dead.

One other note of interest from NY Comic-Con is now the three series and the Rick Grimes movies all tie together. Basically, the helicopter that picked up Rick Grimes on The Walking Dead had a three-ring symbol on it. In the season premiere of Fear the Walking Dead, we learned the three-ringed symbol is associated with the initials “CRM.” The architect of The Walking Dead universe, Scott Gimple, said that this is how the three series are interconnected, and it doesn’t take a genius to figure out that the “M” in CRM refers to “Monument” (the working title of the new spin-off), the “C” refers to The Commonwealth (a civilization in The Walking Dead similar to what we see in the trailer for the spin-off, only much bigger) and the “R” probably refers to a civilization that a character named Ginny on Fear the Walking Dead is trying to develop (Fear is set about 5 years behind The Walking Dead). All three of these civilizations are likely to tie into the Rick Grimes movies (because Grimes was picked up by a CRM helicopter).

— It was a really good episode

— It involved a Soviet-era space shuttle crashing into the forest and causing a fire, and even though that sounds really stupid on paper, it worked surprisingly well.

— Connie (Lauren Ridloff) and Daryl are an adorable future couple

— Rosita had a baby. Siddiq, the guy she fucked around with, is the father; Eugene, who is in love with Rosita, is the baby’s primary caretaker; and Gabriel is Rosita’s boyfriend, but he’s busy overseeing Negan now, who is in some kind of work-release situation. It takes a village. Negan, meanwhile, is cozying up to Lydia, another outsider in Alexandria.

— Ezekiel and Carol are broken up, and they are very awkward around one another. Carol is also bloodthirsty, and she looks like she’s gonna f*ck up Alpha something fierce.

— There was a cute nod to the ending of the comic books in the episode.

— This season will be all about The Whisperers War, which will be better than the All-Out War, because The Whisperers are legit terrifying. Angela Kang works in a lot of great horror tropes, and Ryan Hurst’s Beta is the most purely terrifying character in The Walking Dead history (and Samantha Morton’s Alpha is close behind). Also, Thora Birch will play a Whisperer named Beta (if you aren’t familiar with The Whisperers, they’re savages who wear the skin of zombies as masks to blend in with real zombies).

— Oh, and for those who do watch The Walking Dead but don’t watch Fear the Walking Dead, the latter series basically revealed who Beta is underneath the mask. It may have been the only cool thing to come out of Fear this season.