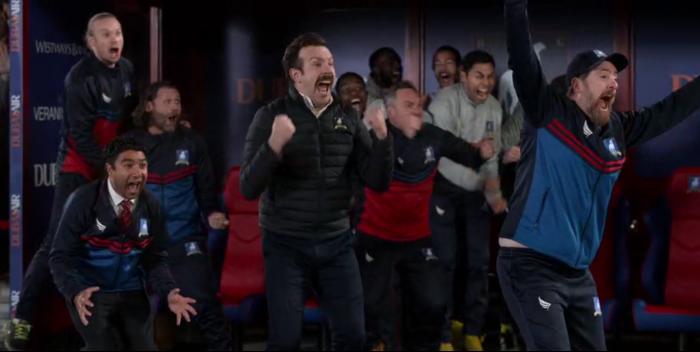 Do You Like 'Ted Lasso'? Podjiba Does, And We Have Some Good News If You Do!

Longtime listeners to Podjiba (a podcast about television, and no other topics!) are well aware that Dustin and I are fans of Ted Lasso. Between our shared love for Bill Lawrence shows (and, in Dustin’s case, podcasts about Bill Lawrence shows), sports, and comedy, this show could not have been engineered to be more for us (unless, perhaps, they had found a role for Michael Ealy’s eyes).

Anyway, with the Ted Lasso season (not series, as they’re already picked up for season two!) finale releasing last week on Apple TV+, we decided it would be nice if we could get Tori to watch the season in time for us to discuss.

Because Tori is a trouper (and possibly also because Supernatural is about to return), she agreed.

She even provided us with some real-time commentary on how her watch went! Let’s check in with her n—

So I am binging Ted Lasso for Podjiba right now, and the last three consecutive episodes have each made me cry - and I am not even done with the season yet.@DanHamamura and @pajiba, you did this to me. You bastards.

Beyond Ted Lasso, this week we also discuss a bunch of topics Dustin decided to bring to the table, including the premiere of Saturday Night Live, the Showtime documentary The Comedy Store, and a very brief update on The Walking Dead! Also, I ranted about (specifically, in favor of) Lost, for some reason.

Finally, some other good news for you Tedheads (Lasso lovers?) out there: like I said, the show was already renewed for season two, but if Bill Lawrence is to be believed (and there’s no reason why he shouldn’t), they may have also already received their season three pickup as well:

3rd season, too. Guardian Shmardian. Not my best insult but you get it.

Enjoy the show! Download here if you don’t like to use your favorite podcast provider! (Also, I forgot to note, but obviously SPOILERS!)

← Marc Maron Wants 'GLOW' To Get The Sendoff It Deserves #SaveGLOW | Even Remotely, Timothy Olyphant Is Still Killing It on 'Late Night' →