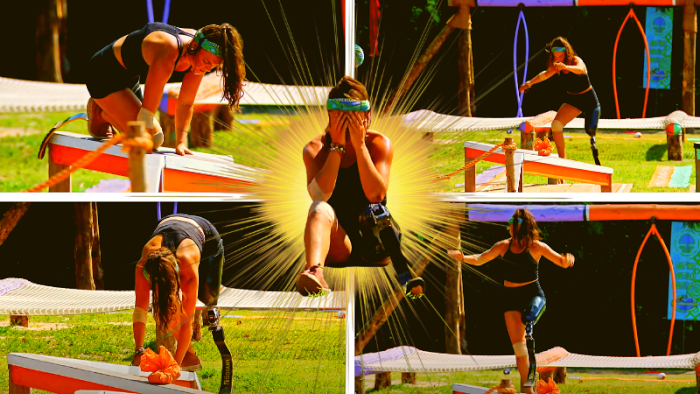 Is 'Survivor' 43 Finally Getting Good?

Maybe it’s a malady of being a 22-year-old show with a 19-year-old contestant, but this season of Survivor, while kinda/sorta fine, hasn’t been very good. Despite all of the key strengths of its production design and cinematography and of course the built-in concept, it took until this week’s challenge for the show to really find its heart.

This week’s reward/immunity challenge seemed like a hill that was too high to climb for Survivor contestant Noelle Lambert, a paralympian on the US team. It’s not like it was more difficult than other challenges, but for some reason (was it the traction treads on her prosthetic?), she just couldn’t seem to do it. Far behind everyone else in the challenge, you could see the doubt and lack of sustenance and desperation creep in and start to take a toll on Noelle. But that’s where champions are born.

Just take a look for yourself:


It was one of the more memorable comebacks in Survivor history and that’s saying something. It just looked like she was beat. Noelle looked the way people look before they give up. But somehow, someway, she wrung victory from the jaws of defeat and etched herself into the record books. Unlike most of the people on Survivor 43, Noelle won’t soon be forgotten. 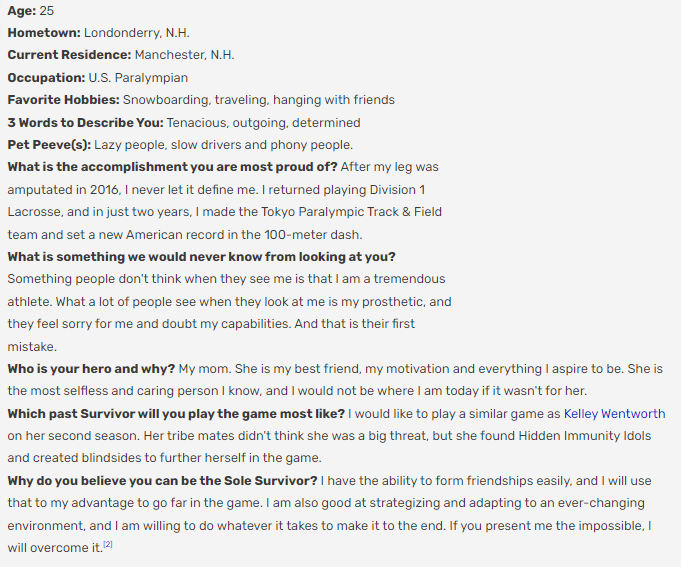 Later on, during the ‘letters from home’ section of the show, we were able to witness contestant Jesse Lopez, a former gang member turned PHD, ugly cry over a letter from his daughter where she asked him to cuddle with her when he got home because he’s “warm.” I really liked that. In addition, he recounted that his son wrote him to “get that money, baby.”

These were some quintessentially human moments on a season that seems dominated by a relatively hollow challenge-bot dynamic. It felt like the Survivors of old had more time to gestate and in doing so, gave the editors more opportunity to build a comprehensive story in the roughly 42 minutes they get every week. What accounts for the shift to a less human-centric plot continuum?

Let’s look at the changes:

The season is shorter, permanently. Once upon a time, Survivor was 39 days long and now it’s 26. This is probably the most jarring change because the net result is to take the reality and/or story element of the game out of it and prioritize the challenge bot structure, game knowledge, and short-term gameplay. It necessitates tribal councils at the end of every episode and doesn’t give the players the ability to settle in and grind.

No rice from the start / no flint/desperation ecosystem. This is just by-product of the show length change, and a tool to try to get people to starve faster. It’s a shock to the contestants, but not particularly interesting to the viewing audience.

There used to be two Survivors a year in two different (and most importantly - new), locations. Now all the Survivors are in the same place: Fiji. Fiji basically covers 45 percent of the cost of Survivor, so that’s not likely to change anytime soon. But while Fiji is gorgeous, there used to be a learning curve for both the cast and the viewer as they acclimated to the unique dangers of the new locale. That’s gone now. Maybe the desperation ecosystem would have more of an impact if the players had to acclimate to the rigors of a new location and hunt/fish/gather in new, unpredictable ways depending on their location. But with the stationary locale, that potential dramatic string is clipped.

In the old days you would see new challenges. Now we tend to see many recycled ones, or, more accurately, because we’re in the same location, the elements of the challenges feel more familiar. That’s not to say that the challenges aren’t still great: they are. But I know many viewers lament the predictability of a puzzle at the end of every challenge and/or the ubiquity of solo endurance challenges in the post-merge format. It would be nice to have a holy shit moment during the challenge reveal.

In the before time, there were limited idols. If you found a hidden immunity idol, it was a game changer. Now there are like fifteen different advantages. Some let you steal a vote. Others make you lose a vote until you say something idiotic or trick people into giving you a bead or one of the many other items your fellow tribemates have. There’s a whole thing now where three people go to another island, chat it up, and then decide whether or not to risk their vote. I hate it. In fact, I’m not crazy about the new era of advantages. In Survivor 42, Drea Wheeler went home with like two idols, a steal-a-vote and a something else.

Here’s the thing: I like that someone, somewhere, was attempting to add wrinkles to the gameplay. That’s great. I also like that some of the wrinkles force either extra-tribe coordination and/or subterfuge. That’s all really fun. It’s just that they somehow don’t quite work, and in introducing a new subset of capers, the overall watchability of the show has felt a bit more murky. Last season, the entire result of a challenge was completely overturned! Just flipped completely and everyone who was safe became vulnerable and none of them had a say in it. That lack of agency in the name of clever TV twists feels not only unnecessarily intrusive but disempowering of the cast at large.

Lastly, every contestant is now a Survivor superfan. I remember the days of Colby and Gerri trying to figure this bad boy out as they lived it. Now I read on Jesse Lopez’s bio:

Jesse is such a student of the game that he was able to break down the moves you need into a numbered list that the show featured with superimposed graphics. In one way, it’s fun to have superfans, because you don’t get the type of clueless imbeciles that would aid a stronger player to victory in the past. This week, Mike Gabler alluded to how the moves among the remaining cast members were now more assassin-like. They’re less hand grenades and more silencers (I’m paraphrasing). He’s right, and having a wildly knowledgeable cast pool makes moves like that possible. But on the other hand, the show itself feels a bit less charming. It’s like being at a party with a bunch of Hollywood agents. Sure, they’re fantastic at chatting you up, but god help you if you believe a word they say or become emotionally invested in them. The fact that everyone on Survivor is now just a different kind of shark sometimes makes you pine for the old days when there was a guppy here and there to keep it interesting.

Nevertheless, after this last tribal the cast will be down to their final seven. I can’t say I was shocked at the person who was voted off last, but it will certainly make for some interesting fallout next week.

So what did you think? First of all: are you watching this season, and if not, why not? If you are watching, has this season grabbed you in the way it has in the past and if not: what do you attribute that to? Lastly, who’s your horse? With seven people left, who has the position and the juice to go all the way?