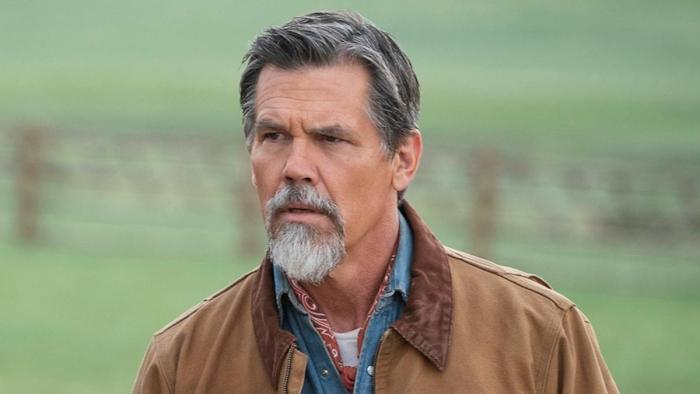 Anyone tuning in to Prime’s new Josh Brolin series Outer Range expecting it to be Yellowstone with some supernatural elements will be greeted by exactly that. It’s almost like two shows have been grafted together: A ranching drama and a weird (but not that weird) episode of The Twilight Zone.

The grounded portion of the series, created by newcomer Brian Watkins, is fairly easy to explain. Josh Brolin’s Royal Abbott oversees a Wyoming ranch that has been in the family of his wife, Cecilia (Lilli Taylor) for generations. They have two sons, Perry and Rhett. Perry has a kid named Amy, and his wife has been mysteriously missing for nine months. Rhett is an aspiring but struggling rodeo cowboy. They all live on the ranch, which is being threatened by the Tillersons, a neighboring cattle ranching family who have the town’s government officials in their pocket. A bed-ridden Wayne Tillerson (Will Patton) is the evil Tillerson patriarch. Based on a property map, the Tillersons discover that the Abbotts are using a large swath of land that belongs to them, so the Tillersons demand that the Abbotts give their portion of land back. It’s also worth noting that Royal gave permission to a poet, Autumn (Imogen Poots), to camp on the land.

One night at a bar, one of the Tillerson men, Trevor, gets in a scuffle with Perry Abbott. Rhett, who is trying to reconnect with a girlfriend from high school, Maria (Isabel Arraiza), beats the snot out of Trevor (who is also Maria’s ex). While Rhett is fetching his truck to take Perry home, Trevor continues to taunt Perry about his missing ex-wife, and during the ensuing fight, Perry loses his temper and accidentally beats Trevor to death. Rhett throws Trevor’s body into the back of their truck, drives back to the ranch, and enrolls the help of Royal, who disposes of the body. The poet, Autumn, witnesses it.

Straightforward, right? Well, here’s the twist: There is a large and mysterious black hole on the contested piece of property that only Royal knows about. It may be where Perry’s wife disappeared to. Two cattle were apparently also lost in the hole. It’s also where Royal decides to dispose of Trevor’s body. After he does so, Autumn spots Royal and pushes him into the hole. Royal wakes up the next morning with a gunshot wound in his leg and scratch marks on his back but seems otherwise OK. He sets about helping his family cover up the murder of Trevor. He also wants to keep the contested piece of land with the black hole out of the hands of the Tillersons. The Tillersons, meanwhile, rightly believe that the Abbotts are responsible for the disappearance of Trevor and are trying to get to the bottom of it using their considerable resources.

When Royal confronts Autumn — who, for unknown reasons, is wealthy — about pushing him into the hole, they come to a begrudgingly mutual understanding that they need to figure out the mystery of the hole together. Talking to Autumn, Royal also remembers snatches of what happened to him when he fell into it (I won’t completely spoil it, except that it may or may not involve time travel).

Initially, Outer Range feels like a dreary slow burn, but that’s only the first 25 minutes or so of the pilot, which Watkins and director Alonso Ruizpalacios use to establish the series’ mysterious, disquieting mood. Once Trevor is killed in the fight, however, the plot kicks in and the action speeds up considerably and makes for a fairly compelling Yellowstone-like family drama. I’d watch that show.

I’m less certain about the supernatural elements, however. At this point in the series (two episodes have aired), it could go either way: It could be a cool and compelling Lindelofian-like mystery, or it could be a silly and tonally bizarre La Brea-like mystery that drops people into another universe or another timeline or a hellish unrealized vision of the future. It’s hard to say, but based on the quality of writing, acting, and directing — at one point, Brolin delivers a blistering screed against God — I’m inclined to believe that Outer Range is a compelling and dark mystery box and more likely than not worth the time investment, a prediction that may come back and bite me in the ass.