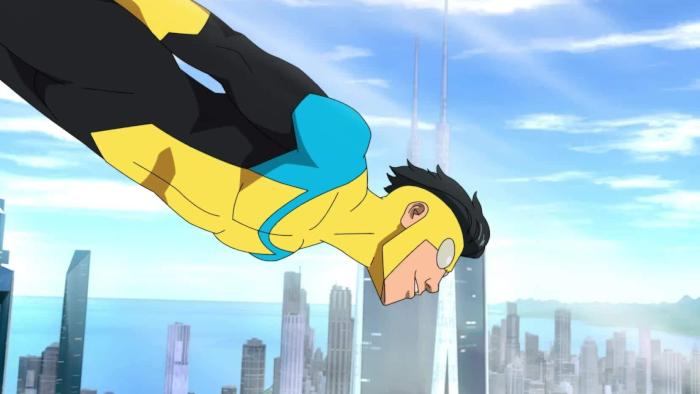 When writer Robert Kirkman co-created the fledgling comic Invincible with artist Cory Walker in 2003, it’s unlikely that he imagined it would go on to become his first major hit. Over the course of its impressively long run (it ran until 2017!), many assumed that an adaptation would be forthcoming, especially when the mega-wave of superhero films and shows began hitting in the 2010s. Well, Kirkman did have a successful adaptation, but for a later creation, a little global phenomenon called The Walking Dead. It wasn’t until 2018 it was finally announced that an Invincible adaptation was on the way. It officially landed this last Friday and wow, did it land with a bang.

Life’s not easy for high schooler Mark Grayson (Steven Yeun). He has to deal with crushes, bullies, and, oh yeah, trying to live up to his father, Nolan (J.K. Simmons), who just so happens to be the world’s most famous superhero, Omni-Man. When Mark’s powers start to make themselves evident, he’s eager to begin making a name for himself on the superhero circuit and possibly be considered among the ranks of the illustrious Guardians of the Globe, the superhero squad that Omni-Man assists with from time to time. As he begins to master his abilities, he soon finds it challenging to balance his life as a teen staring down the barrel of adulthood with being the hero he wants to be. While this sounds like every teen hero story imaginable, without giving anything away I can tell you that there is much, much more happening below the surface.

It will almost surely remind viewers of The Boys, another comic adaptation on Amazon, though Invincible happily doesn’t rely on shock value to maintain audience interest. There’s a similar level of violence, which may catch unsuspecting viewers by surprise. One scene in particular is especially brutal to watch; the fact that the show is animated provides many … um … realistic details up close that’s far more challenging to do convincingly with live action. For folks who have no familiarity with the source material, the bright color schemes (lifted straight from the comic) belies its violent nature, but for those who aren’t turned away by the gore, a multi-layered story about family and duty awaits. Comic fans should be pleased by this adaptation, due to its faithful while still taking it own pace. I was surprised when a certain plot-twist that occurs in a later issue wound up in episode one, but it’s really a testament to how brilliantly the material is being condensed. So while entire pages and panels are recreated almost exactly, the plot has been shifted around quite a bit to smooth out the narrative.

Kirkman recently stated that he could see the show running anywhere from five to seven seasons (courtesy of The Wrap; here be MAJOR spoilers in this interview, do NOT click unless you have seen episode one). With an impressive 144 issues to draw from, Invincible has plenty of source material to keep it going and, with any luck, Kirkman will be able to see his vision through. Superhero fans will probably enjoy the many hat tips to classic superheroes (Invincible is very clear about its many inspirations), and although the subversion of tropes may feel less surprising than they did back in the day, it’ll still pack a punch for comic and superhero fans alike.

The first three episodes of Invincible are available now for streaming on Amazon Prime with additional episodes released every Friday.

Kaleena Rivera is a tv and film writer. When she isn’t contemplating which superhero abilities she wants most (it’s probably flying tho), she can be found on Twitter here

← 'Shameless' Is Not the Show It Once Was; We're Still Going to Miss It | 5 Shows After Dark: 'Snowpiercer' Season 2 Finale TNT, 'Running Wild with Bear Grylls' Sixth Season Premiere →