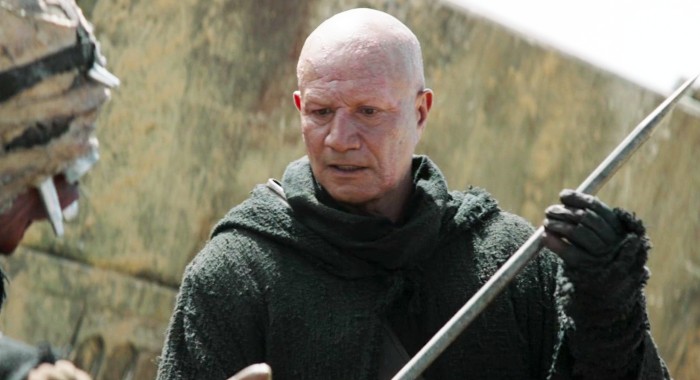 In Theory, ‘The Book of Boba Fett’ Fleshes out Its Protagonist

Previously on The Book of Boba Fett: In a flashback scene, we learn how Boba Fett officially escaped the Sarlacc (“If ain’t live-action, it ain’t shit.” — Lucasfilm) and it turns out it’s a f*cking terrible idea to swallow a dude with a flamethrower arm because he will fire that shit up right in your stomach then punch his way out. Words to remember. As one can surmise by the gaffi stick he smashed skulls in with on The Mandalorian, a half-digested Boba Fett is taken in by the Sandpeople/Tusken Raiders and proceeds to impress their sandy balls off by literally ripping the head off of every indigenous creature on Tatooine. Being indigenous themselves, you’d think that would concern the Sandpeople, but nope, they think it’s the cat’s nips, and can’t get enough of it.

Meanwhile, in the present, Boba Fett has taken over Jabba the Hutt’s criminal empire, and my dude blows at being a crime lord. No freaking clue what he’s doing. Apparently, his whole plan was to just sit on the throne and run things with vibes. Fortunately, Boba has Fennec Shand (Ming-Na Wen) around to carry his whole entire ass. Not only does she know how things work, but she can get in a fight without immediately needing to soak in a Bacta tank barely five punches in. Seriously, Boba Fett got jumped exactly once, and it was like watching my dad try to listen to my mom after he just ate a Jersey Mike’s. “You’re collecting what from TJ Maxx where? I need to heal.”

And that should catch everyone up. We ride!

Welcome to the recap of The Book of Boba Fett Episode 2, “The Tribes of Tatooine.” Of course, I’m using the term recap loosely because, right up front, the main bulk of this column is going to be me ruminating on the current state of Star Wars and how this show fits into the conventional wisdom that the future of the franchise is on TV. (This is me giving you an out. Run.) Like the gigantic nerd that I am, I’ve loved Star Wars since I could walk, but I’m also very concerned with where things are going after The Rise of Skywalker tore a gaping hole in the side of the franchise and essentially left it for dead.

“But, Mike, surely The Mandalorian is a breath of fresh air that revitalized the franchise and took Star Wars back to its roots.”

I’m going to be very blunt. For every truly great Dave Filoni Star Wars episode, there’s 800 hours of filler that preceded it. Never was this problem more evident than with Star Wars: Rebels, which is understandable given that show had 20+ episode seasons. A show like The Mandalorian, however, shouldn’t have the same problem, and yet, there was absolutely dead weight in both of its eight-episode seasons. That’s not good!

More importantly, the series dipped heavily into the nostalgia well because, like I said last week, it’s a show that entirely cashed in on the aesthetic coolness of Boba Fett. Granted, that got people in the door so Baby Yoda could hook them — and, boy, did he — but at the end of the day, the show coasted heavily off of milking Boba Fett and aping the feel of the original films. Star Wars didn’t move forward as much as it went back to treading water after Rise of Skywalker nearly sunk everything. If the “future of the franchise” is nothing more than adding prologues to Return of the Jedi, yikes.

Which brings us back to the central problem of The Book of Boba Fett that I’m going to keep harping on until it does something different.

Let me make this next part abundantly clear because I genuinely don’t want to seem like I’m attacking people who are having a blast with The Book of Boba Fett. I am all for folks enjoying this show. It is entertaining, and if it’s hitting all the right buttons for you, hell yes. Because to be honest, there’s a good chance that the problem here is that I’m dead inside. It’s certainly in the mix, which is why I’m even writing all of this as a “pop culture critic.” (Read: over-opinionated blogger who likes to see himself type.)

With that in mind, it’s my job to poke at the seams of this show, and I gotta be honest, I’m not liking what I’m seeing. One of the praises that I’m seeing pretty regularly is that, finally, Star Wars is fleshing out Boba Fett and developing him as a character. Except what is Book of Boba Fett really telling us about him that wasn’t already communicated through him being a sick looking bounty hunter? In every situation in this episode, Boba Fett does the exact same thing: Effortlessly solves every problem he encounters just by virtue of being badass. That’s not character development. For all the talk of Rey being a Mary Sue, Boba Fett is the ultimate Marty Sue. He literally just strolls into any situation, beats the shit out of everybody, and gets what he wants.

As for the Sandpeople, there’s a lot of talk about “humanizing” them, which I will agree is happening, but in the laziest way possible. Right down to the space train shooting at them, the Sandpeople are literally carbon copies of Native Americans in westerns. I’m talking some real Dances with Wolves shit. I mean, Jesus Christ, while I was watching the episode, I thought to myself, what are they going to do next? Make Boba Fett go on a hallucinogenic spirit quest?

They made Boba Fett go on a hallucinogenic spirit quest.

Granted, it was kinda neat to learn that people get high in the Star Wars universe by taking a live lizard to the nostril, but c’mon. When I’m seeing worn-out tropes that I just saw a few days earlier in the Yellowstone season finale, that’s not great.

That said, I am starting to get (slightly) invested in the story. Unlike the previous week, I actually found myself thinking back to the events of this episode, and I’m of the mind that Boba Fett’s whole going native routine is going to end badly because when we catch up with him in The Mandalorian, he seems pretty hell-bent on getting his armor back. Also, there seems to be groundwork being laid for why he decided to take over Jabba’s throne, so I will give the show credit for starting to lay down a compelling narrative even if it continues to punt to flashbacks just as the conflict in the present starts to get interesting.

Tune in next week where God knows what I’ll rant about because I haven’t even started to bitch about The Volume yet even though I think the show is using the technology pretty well so far. We’ll see what happens. I’m a salty man full of salty thoughts.

← Pres. Biden Put the Blame for the January 6 Insurrection Where It Belongs | 5 Shows After Dark: 'Women of the Movement' Premiere ABC, 'Joe Millionaire: For Richer or Poorer' Premiere Fox →