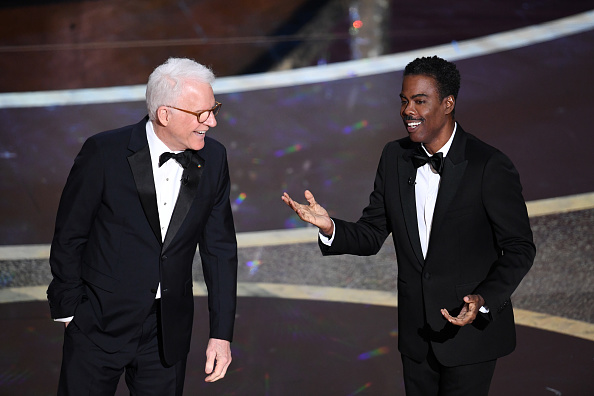 In the Oscars Monologue, Chris Rock and Steve Martin Find the One Guy They Can Punch Up

This year’s 92nd Oscar telecast went hostless again. Compared to Ricky Gervais’ stint at The Golden Globes, it was a wise choice. In lieu of a host, Janelle Monáe performed a wild, terrific, amazing Mr. Rogers and Midsommar-inspired opening number (featuring Billy Porter) that probably shook off a quarter of a million older viewers in the first five minutes. The show did not go without a monologue, however: In a sort of cheat, the Academy brought in two beloved former hosts, Steve Martin and Chris Rock, who delivered five minutes of jokes. It was kind of perfect for 2020: Nobody knew ahead of time, so there wasn’t a Twitter-excavation of their pasts (wait until they watch out of context clips of The Jerk. The cans! The cans!), and besides, they weren’t even “hosts,” so they didn’t have to do any of the promotion associated with hosting a show or take responsibility for its success or failure.

I think it’s a win-win for the non-hosts and the viewers alike, but then again, Parasite swept, so I’m as giddy as everyone else that the best movie won, despite it being a foreign-language film. The monologue did, however, set the tone for much of the rest of the night. There was only one Black nominee in the acting categories and no women in the directing categories, so the Oscar folks did their best to put women and people of color front-and-center during the telecast (although, the random Eminem performance? You know what? Nevermind).

The monologue was short and sweet, and no one was harmed, mostly because Chris Rock and Steve Martin saved their harshest jokes for the one person in the room they could legitimately punch up: Jeff Bezos. He seemed to be a good sport about it, although even if he weren’t, he could cushion the blows with a trillion dollars.