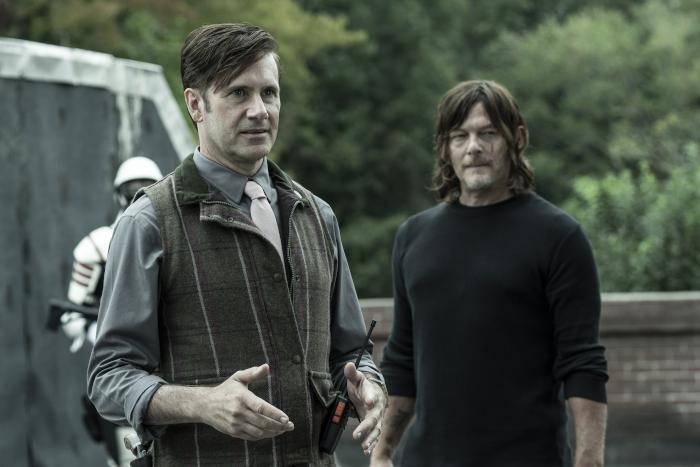 In a Shocking Move, 'The Walking Dead' Goes Off Book

Say what you want about House of the Dragon or Rings of Power (the latter of which I find gorgeously dull), but they are playing on a radically different level in terms of universe-building and storytelling than what was once the most popular show on cable. It’s not that The Walking Dead has gotten worse — although, it definitely has — it’s that it hasn’t evolved. AMC has gone from one of the crown jewels of basic cable to a struggling misfit in the streaming wars, and that’s apparent even in the production values of the television franchise keeping the network afloat.

Watching The Walking Dead now feels like watching one of those generic TNT cable movies. There’s no life left in it, no spark, and even the actors — who spent a year-and-a-half shooting the final season of The Walking Dead in the Georgia heat under COVID protocols — look like they’re done. The writers are apparently burnt out, too, as was apparent when Daryl gives what’s meant to be a pick-me-up speech to Rick’s pre-teen daughter, Judith: “I don’t know what I’m doing. But I’m trying really hard. I wish things were like how you want them to be. That’s the way they should be. But they aren’t.”

In most respects, this week’s episode of The Walking Dead — the second in the final stretch of eight episodes — feels again as though it’s going through the motions. To its credit, however, there is one major surprise when it diverts completely and unexpectedly from Robert Kirkman’s source material.

For the unfamiliar, in the second to last issue of The Walking Dead comics, Sebastian — the bullying, entitled poor man’s Joffrey Baratheon-like son of The Commonwealth’s mayor, Pamela — gets so angry that the Alexandrians undermined his mother’s rule that he shoots and kills Rick Grimes, which quickly unravels into a hasty conclusion to the series in the very next issue.

In the series, Sebastian Milton is no less bullying and entitled, but — surprise! — he’s killed off in this week’s episode after a group of zombies invades The Commonwealth amid the chaos that erupts when Stephanie turns the townspeople against Sebastian. No one tries to save him, either. For a season that has — aside from some filler battles with stock villains — played it fairly close to the source material, it comes as a major shock. The character who hastened the end of The Walking Dead comics is dead!

Of course, it’s all in service of building up another antagonist, Lance Hornsby, played by Josh Hamilton. Before Sebastian died, Pamela negotiated a deal with Carol to turn against her rogue right hand, Hornsby, in order to save her son. Behind the scenes, however, from his prison cell, Hornsby somehow orchestrated the events that led to Sebastian’s death. I like Josh Hamilton, but Hornsby has always felt like a minor villain, and to build him into the Big Bad for the final season of what was once the biggest show on cable feels like a rookie move.

Hell, this series used to get 20 million viewers a week, and now they’re throwing the father of Clay Jensen in 13 Reasons Why at us as what is essentially the series’ Big Boss? This is the guy they have to go against to save The Commonwealth? A low-rent Littlefinger? For a guy like Jeffrey Dean Morgan’s Negan, Horsnby is mud on the bottom of his shoe, except that Negan’s wife is pregnant and the soon-to-be-dad has gone soft. I never thought I’d say this, but I miss Negan’s evil streak.

For a series that used to be known — and often reviled — for its brutality, The Walking Dead has also gone soft. No one anyone cares about dies anymore. I genuinely don’t remember when the series’ last great episode was. With six left to go, I hope they have at least a couple left in the tank.