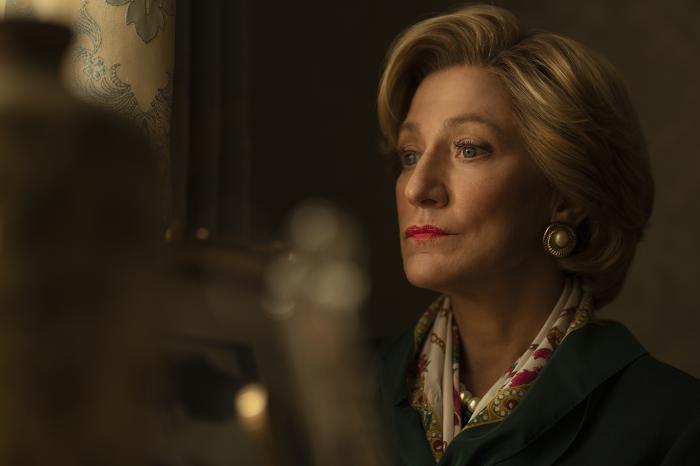 Edie Falco’s Hillary Clinton has largely played a background role in this season of American Crime Story, in part because she was convinced that her husband had done nothing wrong throughout the ordeal. She believed him when he said he hadn’t had an inappropriate relationship with Monica Lewinsky, just as she believed him when he said that he hadn’t had an affair with Gennifer Flowers.

This week’s episode sees Hillary rise to the fore, first flashing back to the time she threw herself in front of Bill to protect him against the Gennifer Flowers allegations in 1992, and then again on 60 Minutes, where she managed to raise the ire of Tammy Wynette by claiming that she’s not the “stand by your man” type. When the Lewinsky business surfaced, Hillary assumed — at least based on Impeachment — that this was all a witch hunt perpetrated by right-wing forces. She wasn’t wrong.

But, there was some basis in that witch hunt, and Ken Starr’s team finally caught a break when Lewinsky dropped her lawyer and hired a new one, who ironed out an immunity deal with the Starr team in exchange for her testimony. She also provided the blue, semen-stained dress, and once Bill gave a DNA sample, they were able to match his semen to her dress. Game over, right?

Yes, and no. Clinton would no longer be able to deny he had intimate relations with Lewinsky — and he had to come clean to Hillary, who was furious (half because of the affair, and half because of the lying). (It didn’t help that Clinton used his attorney, David Kendall, to soften up Hillary because Bill is a weasel). But this is where Slick Willie came in, and honest to God, I’m still impressed with how Bill managed to navigate the Starr deposition. He did so by beginning with a statement in which he admitted to an inappropriate relationship, which in and of itself took all the wind out of Ken Starr’s sails because he wanted nothing more than to catch Bill in a lie about the existence of the affair. Clinton then added that he did not have “sexual relations” with Lewinsky as the term was defined in the Paula Jones deposition (true-ish?), and then he stated at the outset that he would not answer any questions about the specific details of his sexual encounters with Lewinsky.

He left Starr’s team flummoxed. They had come in with a plan to tear Bill to pieces, but Bill found a way to tie their hands behind their backs before they even began. By the time they had regained their composure, the deposition was over. Bill owned them. What’s more, is that Clinton successfully and righteously framed the entire lawsuit as a witch hunt funded by conservatives, and again, successfully argued that his sex life was a private matter. The man who received blow jobs from an intern managed to shame the very people asking him about it.

The deposition saved his presidency. He somehow managed to get America on his side because there’s nothing that America loves more than a flawed middle-aged white man asking for redemption. Again.

Hillary, on the other hand? Screwed. She would either be the woman who left the President of the United States, or the woman who stayed with the President of the United States. Both options were terrible for her. Bill’s popularity soared. Hillary’s dipped. I still think that — putting everything else aside — her decision to stay with Bill after he admitted to the affair with Lewinsky is what cost her the Presidency. She helped save his political career at the expense of her own, which is basically what she did for most of her marriage.

It’s good to see that behind the scenes — at least based on Impeachment — Hillary berated the hell out of Bill, finally concluding that, from that moment on, their marriage was an “arrangement.” I don’t know how true that is, but I suspect it was the case for at least a few years.

Next week, Linda Tripp returns, and thanks to that deposition, Bill was able to turn the public against her, too, not that she didn’t deserve it.