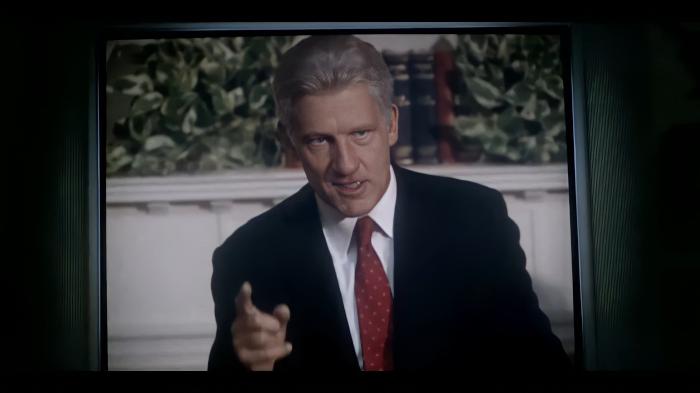 I felt a lot of shame watching this week’s episode of Impeachment: American Crime Story. Shame for building Bill Clinton up in my mind as a kid, shame for wanting to believe him when he lied, shame for wanting to believe the lies that were told to smear Monica Lewinsky, shame for not looking askance at the parade of late-night jokes about Lewinsky, and most of all, shame for rooting for Bill Clinton at the time to win, to come out of it, to say the thing that would make it all go away.

I was young. I was from Arkansas. He was the favorite son. I hadn’t learned to interrogate the news. I naively believed that the President of the United States would not lie under oath. And yet, even then, if I’d been pushed on it, I’d have probably conceded that I believed he’d had an affair with Lewinsky, but I suspect I would have fallen in line with the popular sentiment at the time, which was “What happens in a politician’s private life is none of our business.” Slick Willie, as they used to call him in Arkansas, popularized that sentiment, and man did the country eat it up. Maybe it’s not entirely untrue, either, if he’d had an affair with someone who didn’t work for him, and if he hadn’t lied about it so blatantly and under oath.

But he did. He gaslit Lewinsky, Paula Jones, his own wife, and the entire United States, but the country forgave him. He never faced any real consequences, and Monica Lewinsky continued to be a late-night punchline long after Clinton’s presidency ended. He would have been eaten alive today, and he’d have deserved it.

This week’s episode centered on the days that the affair came to light. It happened so fast. No sooner had it been revealed that Clinton had had a sexual relationship with Lewinsky than every goddamn person who had ever spoken to Lewinsky came out of the woodwork to offer an opinion. A high-school boyfriend badmouthed her. The footage of her hugging Clinton at a rally surfaced. I had completely blocked out — or forgotten — that Lewinsky had also had an affair with Andy Bleiler, who could not have been a better cover for Clinton. Bleiler did exactly what Clinton did and gaslit his wife and then the nation, suggesting that Lewinsky had a dangerous, stalker-like obsession with him, and he did so while standing next to his wife.

Clinton, meanwhile, recruited his disgraced former attorney Dick Morris to his aide. Dick f—king Morris. Bill told Hillary and his staff that he’d never had sex with Lewinsky, and then he “refreshed” the memory of his secretary, Betty Currie, about what had happened, essentially hanging her out to dry. Hillary further staged another opportunity for Clinton to deny the affair publicly. “I did not have a sexual relationship with that woman.” Lewinsky watched it all on TV from her home, where she was trapped in by the press. She did leave, however, to sign an agreement with Ken Starr, exchanging her testimony for immunity. Ken Starr pulled it after Lewinsky signed it.

Murphy’s miniseries depicts Clinton as someone as villainous as Linda Tripp. And even now, 25 years later, it’s hard to wrap my head around that, because Ken Starr and the people on the other side of this were so loathsome. But one side’s evil does not render the other side benign. Clinton might have been an effective President, but he was not a good man. Even that didn’t become clear to me until I read his memoir, wherein he reduced the defining scandal of his Presidency to a passing mention and never gave the full-throated mea culpa I had hoped to read. He still hasn’t in the 25 years since the affair, which is part of the reason why the once-popular President has become an afterthought in the Democratic Party.

In next week’s episode, Clinton comes clean. Sort of.

← Why Does Mel Gibson Keep Getting So Many Chances? | Ruby Rose Speaks Out About Horrible Things That Have Happened On The Set Of 'Batwoman' →