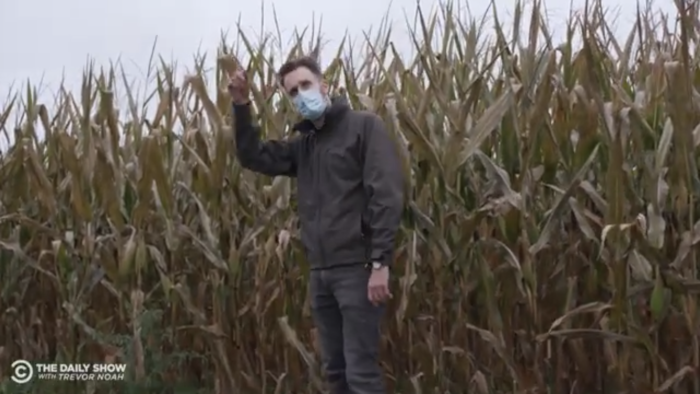 I’m tired. Tired of the election cycle. Tired of hateful messaging. Tired of this year. These are trying times for people of all walks of life. Come Tuesday, they could get a lot worse. Not for everybody though. In fact, a large group of people are hoping for more of the same. Jordan Klepper of The Daily Show has been talking to them and guess what: they’re pretty tired too. Maybe we have more in common than I… never mind.

On the latest episode of the Comedy Central program, Klepper attended the last Trump Rally he’ll witness before the election on Tuesday. The first people he talked to echoed my sentiment, as did Jordan. “I think people are exhausted,” said the first interviewee, with Klepper responding “me too” in a way that felt painfully real.

What follows is Trump supporter after Trump supporter making claims about things they don’t seem to understand. Jordan Klepper, as he always does, navigates it with grace. He practically begs for any shred of evidence to support these people’s wild theories about laptops and the economy and China. It’s a game that has been played many times before and hopefully, this will be the last.

I’m not joking when I say how tired I am. A lot of it is mental. Watching videos like these, seeing people lined up to watch someone spew hateful rhetoric, it takes its toll. Today my exhaustion manifested physically as well. I woke up early after a night of little sleep, stood in line with my wife for an hour and forty minutes (we were lucky) to vote early, and then drove almost four hours to visit my parents.

But as we waited in the rain and when we left, I saw hundreds of people lined up around the block. People from all walks of life. I don’t know who each one voted for but … they were there to vote. To let their voices be heard instead of someone else’s, and you know what? That made me a little less tired.