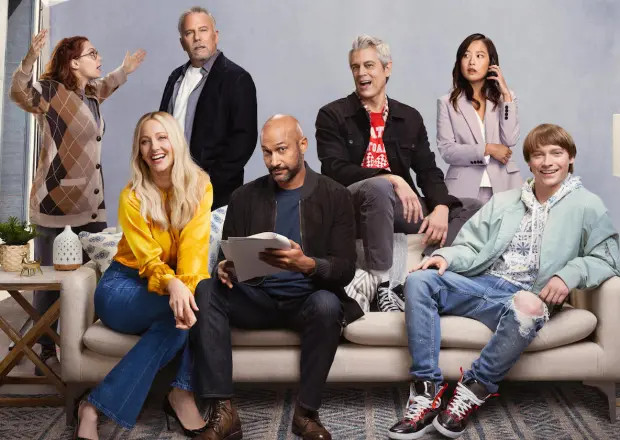 Reboot is a fun, would-be simple return to a “simpler” (heavy on the air quotes) style of TV humor: the simple family sitcom. The premise: Hulu calls in an edgy queer filmmaker, Hannah (Rachel Bloom), to launch a new, “brave” show for the platform. (In the pitch meeting, there’s some self-righteous self-back-patting by executives who greenlit The Handmaid’s Tale.) Hannah takes them by surprise: she wants to reboot the stiff, formulaic family sitcom Step Right Up into a grittier, more realistic vision. Reboots sell, agree the executives. The greenlight shines.

That means bringing back together the ragtag group of actors at the heart of the old sitcom, dragged back into their previous life from scattered corners of the acting and non-acting world. The show’s dramatic centerpiece, Reed (the ever-delightful Keegan-Michael Key), is an overly serious and overthinking would-be serious actor who really can’t help telling everyone how he studied drama at Yale. (His New York acting career has vastly floundered in the days of his sitcom success.) The aimless and insecure Bree (Judy Greer), his old flame and costar, married a northern European duke, only to find him moving quickly on with his secretary. Clay (Johnny Knoxville) is struggling with decades of crushing addiction but might just be getting his feet back under him at long last. And Zach (Calum Worthy) is the disturbingly still-a-child-actor adult whose mom still comes to set with him and clearly hasn’t been socialized into rank-and-file humanity.

The cast is excited, the script looks shockingly, genuinely good, and Step Right Up is on its way back to the small screen … until the show’s original much-loathed writer, Gordon (Paul Reiser)—who still has the show rights—marches onto set, igniting a comedic firestorm.

Surprise! That asshole writer is Hannah’s absentee father who abandoned her as a child for his second family—incidentally, the family that serves as a basis for Step Right Up. The absentee father she’s reincarnating the show to get back at, to retell the narrative to include the family Gordon left behind. Suddenly the show is a battleground between father and daughter, duking out generational trauma via the medium of a sitcom filmed in front of a live studio audience. It’s also a fertile backdrop for showcasing the generational changes in humor and media with a healthy measure of cringe for flavor.

Add to the mix an unfiltered intergenerational writers’ room (featuring Fred Melamed, Rose Abdoo, Lawrence Pressman, Kimia Behpoornia, Korama Danquah, and Dan Leahy), a young comedy exec straight from Silicon Valley who can’t tell a joke to save her life (Krista Marie Yu), and a reality star shoehorned into the cast for ratings (Alyah Chanelle Scott), and the show is in motion.

Reboot becomes a meta-comedy about Hulu trying to make a buck on a would-be daring new project that rests soundly on old-time sitcom standards. The show pulls it off pretty well for the most part. Created by Steven Levitan of Modern Family fame, Reboot conjures the same comedic flavor, albeit with what I think is a bit more finesse but no less of a reliance on easy cringe. Reboot has its self-aware joke-setup-punchline bones with a wholesome and heartfelt emotional journey at the bottom of it.

That said, the show isn’t the high-flying success it had the potential to be. Even with its stacked cast, the episodes feel more like a savvy playground for commentary than real characters with real stories awaiting resolution. It hits all the right notes, but it just doesn’t sing. I wouldn’t exactly call it a swing and a miss. More a series of groundballs, lackluster but nevertheless entertaining.

Reboot delivers more than its fair share of laughs, and I don’t regret investing the time in the first season if only for the obvious, absurd level of fun in depicting this small-screen rendition of a small-screen production, with plenty of shots taken at Hulu and majority-shareholder company Disney.

Give it a shot. The first season is short and sweet at only eight episodes, with a quick sitcom-speed delivery perfect for binging. To me, it feels like it belongs to the same family of ensemble genre reinventions that gave us Only Murders in the Building. Maybe with a longer runway and a second season, Reboot can take off to the same heights. Here’s hoping.

The first season of Reboot is now streaming on Hulu.