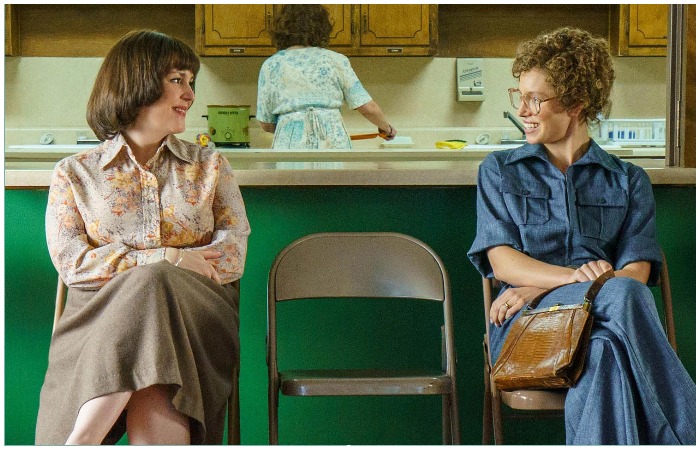 No true-crime podcast or show these days seems to struggle to find an audience. We all relate to that The Simpson’s meme. We all obsessively watched Abducted in Plain Sight. Some like to watch the lesser-known unsolved murders and others can’t wait for the next documentary about Ted Bundy. True crime is fascinating, especially so when someone who seems so normal commits the most brutal and grisly crime. Candy Montgomery is one of those cases.

Robin Veith and Nick Antosca’s Candy paints a portrait of their titular murderess as the image of perfection. Candy (Jessica Biel) is a mother, wife, and devout churchgoer. She sings in the choir, avidly crafts Christian tales for the children at Sunday school, and even has time to start her own home decorating business. She has the same colorful sweetness of candy itself. She has an energetic personality with a constant smile on her face. She’s the kind of person you’d want to be around and who you would least expect to wack someone with an ax 41 times. There’s a great scene where Candy’s husband Pat (Timothy Simons) takes an ax to a tree stump. It’s such an arduous act for him that he can’t help but laugh in exhaustion because there’s no possible way his wife could do that so many times, right? “You can’t be perfect all the time,” another church mom tells Candy. She’s certainly right.

The victim, Betty Gore (Melanie Lynskey), is the opposite in personality. She’s not outgoing or upbeat like Candy. She’s quiet, sullen, and the outsider amongst the other church moms. Candy describes Betty as an “overprotective homebody,” in reference to her parenting. But Betty isn’t able to have a life of her own like Candy because her husband Allan (Pablo Schreiber) is always away on business, leaving her alone with their newborn whose cries she drowns out with the vacuum. The different personalities of these women are also highlighted in the series’ costume and production design. Candy is more playful with color and style, while Betty wears outfits of your stereotypical housewife. The design of Candy’s home is much bigger and brighter, with open windows and a high ceiling. It’s an environment of freedom and exuberance. Betty’s home is covered in browns, muted yellows, ugly carpets, low ceilings, and it seems like the shades are always drawn. It’s an environment of suppression and claustrophobia. Betty’s about to snap at any moment, and if this was the latest true crime docuseries you were going into as a blind watch, you may think that she is the one who will grab the ax. Candy plays with our perceptions of what makes a murderer and our nature of being quick to judge, something Candy herself will also play with.

As quickly as we are introduced to Candy, she changes. Her glasses that matched her excitable, wide gaze are gone. Her perfectly coiffed curly hair is drenched. Her forehead is bleeding. That brightness that Biel exuded as the character is extinguished. Ariel Marx’s score of erratic violin indicates that something terrible has happened, and we know what that is. Candy goes about her day as if nothing happened, but she’s on edge. When Betty’s mutilated body is found 13 hours later by neighbors, it’s only a matter of time until the truth comes out — or at least, the truth Candy wants everyone to believe.

The series’ structure is its biggest fault. The murder and discovery happen all in the first episode, and too quickly, with the audience made to wait until episode five to show what happened that Friday afternoon at Betty’s home. That first episode is suspenseful and gripping, a feeling that dissipates for most of its following episodes. There’s a lengthy gap between the event we’re all here for and the show’s decision to transport the audience back two years earlier. This does make for essential backstory and this isn’t to say that what happens in the years before is uninteresting. In fact, the messy drama that intertwines these two women and the cracks that are revealed in their respective marriages makes for good drama and helps to explain what could have led to this crime. Within this backstory, however, something as significant as Candy’s childhood trauma is explored so briefly that it feels like the writers thought this point unimportant despite perhaps being the key to her actions. It would have been beneficial to have the murder and the discovery of Betty’s body happen more slowly, so the anticipation of that act wouldn’t have been satisfied so early. When you take a break from the crime, you just want to see the aftermath and investigation right away. During the slow buildup back to that night in 1980, the audience is given short little teases back to the murder. Like scenes from the courtroom that should be significant but are instead placed randomly in-between scenes from those two years prior like filler and just a reminder to stick around. But we shouldn’t need those reminders.

Despite all that, the murder scene, in all its choreographed blood splatter, is definitely worth the wait (as is the heated court battle). This has all to do with the physical nature of the murder scene and the committed performances of Biel and Lynskey. The things that make Candy and Betty so different in personality could only be picked out thanks to how the actresses portray them. There was a fear that because Betty’s death came so soon, Lynskey wouldn’t be present very much. Thankfully, that isn’t the case. She captures a very repressive and archaic view of a housewife so well that it feels suffocating. When we move to Candy, it’s like a breath of fresh air as Biel captures a woman with such a lively personality. She delivers her lines with speed and precision, giving Candy a meticulousness that puts into question how she could be so careless. You can tell the actresses were in tune with each other and were working together to create the perfect contrast between these women. Simons and Schreiber are also fantastic as the husbands. Simons, of course, delivers one of my favorite scenes in the series (the aforementioned one of him going at a tree stump 41 times) and Schreiber displays all the worry and panic when you know something is wrong, and grief and disorientation when you lose the one who kept your life together.

Candy explains that images can distort. The series is about how someone who seemed so normal could actually be insane, encapsulating our fascination with true crime. Candy’s emotional testimony aims to build sympathy, but what the audience has here that the jury did not in 1980 is Betty looking back at them. “That’s your story,” she says to Candy on the stand. This is Candy’s story, not Betty’s. We’ll never know it, but we can come up with our own theories. That’s the enjoyment of true crime after all.

← Is There Suddenly a Mass Exodus of 'Fear the Walking Dead' Cast Members? | 'Doctor Strange In The Multiverse Of Madness' Spoilers: The Illuminati, 'What If...?', And More →