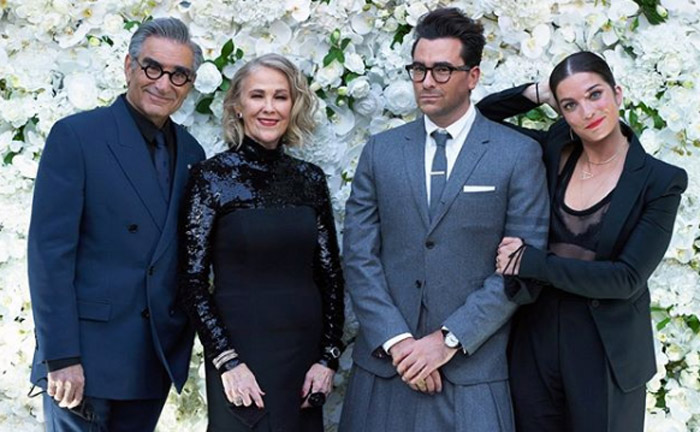 How The 'Schitt's Creek' Team Reacted To History-Making Emmy Wins

Schitt’s Creek cleaned up at the Emmys last night!

That means Schitt’s Creek co-creator Dan Levy won FOUR Emmys last night. Moreover, the Rose family won all four acting categories, which AwardsWatch’s Erik Anderson reports is a first in the 72 years of Emmy. The only bummer is that the pandemic made the Emmys a remote experience. However, that didn’t stop the Schitt’s Creek crew from making the most of it.

They celebrated by throwing a party in Toronto. Attendees had to test negative for COVID, then quarantine until the big day. Castmates Emily Hampshire and Sarah Levy were unable to attend, but the latter still made it into a family photo:

when @sarahplevy can't make it to the #Emmys event

To celebrate the Rose family—and perhaps the series’ climactic nuptials—a wall of white roses was erected to show off their Emmy’s fashion.

Yes, Dan Levy is wearing a kilt, because he is as much of a fashion god as the character he won an Emmy for playing.

It was from this very exclusive event that the Schitt’s Creek crew accepted their awards.

Here is the acceptance speech from Annie Murphy, who brought a lot of love to A Little Bit Alexis. Warning: the sheer exaltation in this clip will make you cry tears of joy.

Look how happy Dany Levy is for her! WHY ARE NOT ALL AWARDS SHOWS STAGED THIS WAY! Now, here’s Dan Levy’s win for his performance as pansexual icon, David Rose.

Levy used this moment to pay tribute to his dad, co-star and Schitt’s Creek co-creator, Euegene Levy, and “the magnificent Catherine O’Hara…who led by example, they led without ego, and they led with excitement.” He also thanked Annie Murphy for playing “my better half.”

Guys. I’m in love with him. Here is he is accepting the directing honor with co-helmer Andrew Cividino.

The Levy family hugging is such a balm.

Here is her moment (after Jennifer Aniston fought a fire):

Bless O’Hara for a delightfully on-brand speech that includes praise like, “I must provide an especially gaudiloquent tribute to Debra Hansen, our wardrobe whisperer, to my guardian make-up angel, Lucky Bromhead, and to our dare-doing hair wrangler, Ana Sorys. Every day their munificent venistation made me who I thought I was. And I would be an ungrateful doddypoll not to share it with them.”

To conclude her speech, O’Hara took a moment to wish all watching well, saying, “May I please wish you all a sound mind and a sound body. And though these are the strangest of days, may you have as much joy being holed up in a room or two with your family as I have with my dear Roses.”

This show was a gift that just keeps giving.

Finally, here is the cast of Schitt’s Creek winning Outstanding Comedy Series for a show that has meant the world to so, so, so many behbays around the world, including Elton John.

In this speech, Eugene Levy paid tribute to his son, and in doing so put simply why Schitt’s Creek is dazzling. “I want to thank this young man, who took our fish-out-of-water story about the Rose family and transformed it into a celebration of inclusivity, a castigation of homophobia, and a declaration of the power of love.” 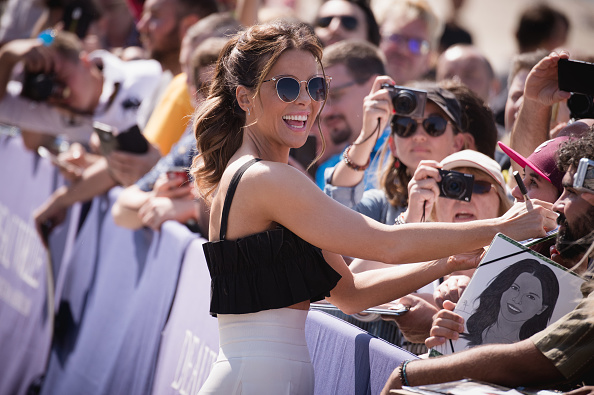 Donald Trump Gave Away His Supreme Court/Reelection Strategy This Morning 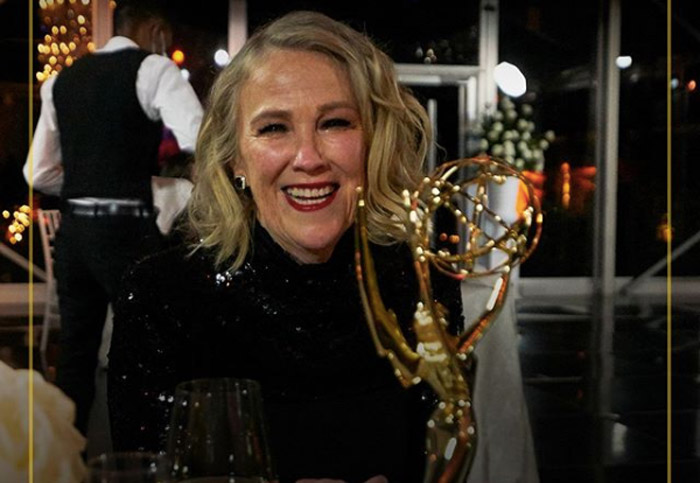