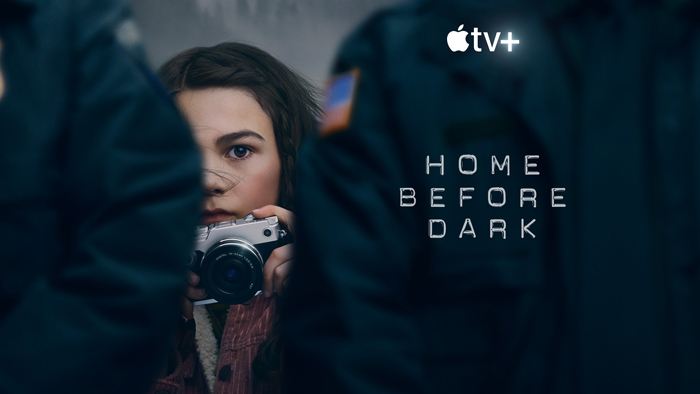 How Much of 'Home Before Dark' Is Based On The Real Hilde Lysiak?

New to Apple TV+, Home Before Dark plays like Broadchurch meets Harriet The Spy. The mystery series stars 9-year-old Brooklynn Prince as a journalist who tackles grown-up topics like police corruption, missing person cases, and murder. In a startling twist, this kid-centered detective series is inspired by the incredible true story of Hilde Lysiak.

Show creators Dana Fox and Dara Resnik got creative with the show’s central premise, which involves a 31-year-old mystery that’s scarred the smalltown of Eerie Harbor, Washington. However, a surprising amount of Home Before Dark is plucked from real life. Let’s break it down.

Hilde Lysiak is a child reporter.
Born in 2006, Lysiak displayed an interest in reporting from an early age. Just like in the show, she was inspired by her father, Matthew Lysiak, a Brooklyn-based journalist who wrote for a major newspaper. (In the show, the fictional New York Sentinel stands in for the New York Daily News.) Also true to life, Lysiak accompanied her father on the job, even going to Florida with him when he reported on the Trayvon Martin murder.

By the age of 8, Lysiak had started her own paper, which detailed the goings-on of her neighborhood and family. As seen in the show, it began as a simple affair done in crayon and reporting on events like the birth of her little sister. Over time, Lysiak expanded her news empire to a website, Facebook page, and Youtube channel.

Lysiak got the scoop on a murder case.

In Home Before Dark, Hildie suspects a neighbor’s deadly “accident” was actually murder. So, she doggedly pursues clues, interviews, and suspects until she unearths the truth that leads to a killer being collared. In real life, Lysiak didn’t crack the case, but she was the first to report on the homicide of a local woman in her new hometown.

While the fictional Lisko family moves to Eerie Harbor, the real Lysiak clan moved to Selinsgrove, Pennsylvania. On April 2, 2016, the pint-sized reporter was at a Selinsgrove police station investigating a vandalism case, when she overheard the cops talking about a homicide that had just been called in.

As Hilde does on Home Before Dark, Lysiak raced to the scene of the crime on her bike. There, she spoke to the cops on the scene and neighbors, learning that a woman had been beaten to death with a hammer and that her husband was the chief suspect. Hours ahead of all other outlets, her Orange Street News ran the report “Exclusive: Murder On Ninth Street!” (You can read it here.)

For writing about the suspicious death of Penny Gillis, Hilde gets mocked at school, cold-shouldered about town, and harassed online. Supported by her older sister Izzy (Kylie Rogers), she stands up to the haters by stepping up on the school lunch table and reading the mean comments aloud and defiantly.

When Lysiak’s exclusive went viral, the fourth grader’s Facebook page and Youtube channel were flooded with commenters who declared she’d written “sensationalist trash,” that she was too young for such work, and that she should go back and “play with dolls.” (Some of these comments are quoted or paraphrased in the TV show.) In response, Lysiak posted a new video to Youtube, which was edited and filmed by her older sister Isabel Lysiak.

In the video, R.E.M.’s “Everybody Hurts” plays in the background as the intrepid reporter reads the offensive comments aloud while wearing a pin that reads “I heart free speech.”

Then, she defends herself and her work, saying, “I know this makes some of you uncomfortable, and I know some of you just want me to sit down and be quiet because I’m nine. But if you want me to stop covering news, then you get off your computer and do something about the news. There, is that cute enough for you?”

Later, Lysiak penned an op-ed about the whole experience for The Guardian. It is titled, “Yes, I’m a nine-year-old girl. But I’m still a serious reporter.”

Lysiak faced off against authorities over her right to post video.

On the show, Hilde is confronted by a furious mayor who demands she take down the video of the Richie Fife abduction, which she put online as part of her reporting. Hilde refuses, citing the First Amendment protection of freedom of the press. While this might seem like something trumped up for juicy drama, the real story shows Hilde’s inspiration is just as fearless and well-versed a journalist.

In February of 2019, 12-year-old Lysiak was in Patagonia, Arizona, interviewing residents about their thoughts on border security between the US and Mexico. While working a story, she was confronted by Arizona marshal Joseph Patterson, who allegedly threatened to “throw her in juvi” if she didn’t stop. In response, this girl got out her video camera and started rolling.

On tape, Patterson tells her, “If you put my face on the internet, it’s against the law.” She posted the video, citing the freedom of the press. The marshall was reportedly disciplined for his actions.

Lysiak’s passion for reporting has become a family affair.

As hinted above, the real-life Isabel works with her younger sister on Orange Street News. Besides videographer and editor, she’s also Lysiak’s photographer. This might be an arc followed in Season 2 of Home Before Dark, as Season 1 planted the seed that Izzy has an eye on the camera her dad has reserved for use on Hilde’s paper.

The conclusion of the first season of the show has Matt and Hilde more officially teaming up as a Holmes-and-Watson duo, ready to take on the new questions raised from what was found at the bottom of that lake. In real life, Lysiak and her dad teamed up for an ambitious project, a series of children’s books called Hilde Cracks the Case. Father and daughter co-write the books, which don’t get as macabre as Home Before Dark. Instead, this Hilde is cracking cases about cupcake thieves, a bear on the loose, and a UFO sighting.

← The Best And Worst Of Star Trek: Picard Season One | The Updated Release Schedule Points to When Movie Theaters Hope to Reopen →