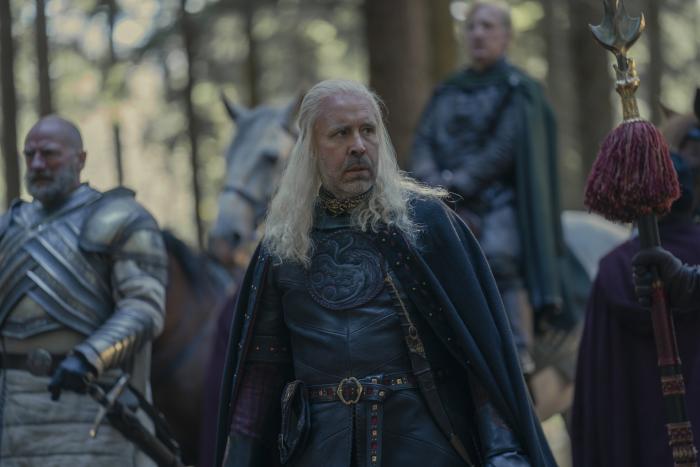 ‘House of the Dragon’ Episode 3: The Line to the Throne Gets Ever More Complicated

Signs and tradition are the lodestone for many a Westerosi ruler, aspiring or otherwise, and Viserys is no different. The trouble with signs is that they’re terribly particular about who gets a chance to ever set eyes on one, while tradition more or less demands blind adherence by those who follow it.

It has been three years since Viserys announced his intention to marry Alicent, a decision that’s caused a considerable amount of strife in his personal and political arenas. But on this day, Viserys doesn’t wish to dwell on either, choosing instead to focus on the happy occasion of his two-year-old son’s birthday. As Rhaenys said, it was a high probability that Alicent would be able to give him the son that he longed for.

Unfortunately, the world insists on bringing its troubles to his proverbial doors no matter how much Viserys wishes for them to go away. Paddy Considine is making some wonderful choices with this role. The large but strained smile that begins to crack around the edges as Tyland Lannister (Jefferson Hall) insists on updating him on Daemon and Corlys’ disastrous siege on the Stepstones? Brilliant (and only overshadowed by the drunk scene in the chair later in the episode). His slightly forced cheer starts to fray rapidly when Rhaenyra, now seventeen and still resentful of her father’s choice of bride, rejects every olive branch he extends her way.

Her smoldering anger ignites into outright fury once she catches on that Viserys’ seemingly random references about her own potential family are more than the wistful musings of a man watching his eldest child come of age; every eligible royal bachelor in the kingdom has expressed interest in Rhaenyra. Though it should have been expected, her shock at being a “prize” can almost certainly be chalked up to denial—though listening to Jason Lannister (Hall, playing double duty as twins) give the most presumptive pseudo-proposal in history is enough to put most people off the idea of marriage—and the same could be said for Viserys, who knows his daughter enough to know how well that would go over.

For me, the strength of House of the Dragon lies in familial strife overlaid with perilous court politics. As exciting as the battle later in the episode is, I was even more enthralled watching father and daughter have a fight so intense that they forget they’re yelling at one another in the middle of a very well-attended party. “Even I do not exist above duty and tradition, Rhaenyra!” The mask slip moment allows us to get a glimpse of how little control Viserys, he of the carefully tended to model of Old Valyria, has of his life and destiny. But as the scene shows, no one is capable of making him lose the bit of control he does maintain quite like Rhaenyra, which is what lends so much authenticity to their relationship. Considine and Alcock (whom I’ll miss greatly once her run is over) are so good together playing two people who clearly have immense love for one another even as pride and stubbornness convinces each of them that the other is wrong by default.

But it literally only takes one mention of a white hart being sighted, a rare creature known mostly through tales, for Viserys to lose sight of Rhaenyra. Otto, master manipulator he is, seizes it as an opportunity to elevate baby Aegon as not simply being the King’s firstborn son, but as a child favored by the gods themselves. Tradition and duty demand that Viserys pursue the animal, and although there’s a certain pleasure in knowing such a thing would be seen on his son’s birthday, all joy and excitement is sapped out with the knowledge that such an auspicious sign witnessed by so many would force him to disappoint his daughter yet again. It sends him into a depression, leaving him slumped in his chair while clutching a goblet and doing his very best Cersei Lannister impression.

The wine and his already sour temperament leaves him despising nearly everyone, Otto included, whose attempt to hedge his bet by proposing Rhaenyra be betrothed to her toddler brother proves to be a bridge too far. Sure that he is surrounded by nothing but a bunch of manipulators, the only piece of solid advice to come his way is from Lord Lyonel Strong (Gavin Spokes), who suggests that Corlys’ son, Leonor (Theo Nate) would be the most advantageous match, as well as an excellent means of mending the rift between the two houses (and he’s age appropriate!). Just as Viserys begins to think of Strong as one of the few people who aren’t solely occupied with their personal interests, Strong finishes his proposal with a mention that Laenor is currently fighting at the Stepstones and could very well die in the process. That’s enough for Viserys, who staggers out of the chair and takes his leave.

Miles away, Rhaenyra has sought solace and contemplation out in the forest with Ser Criston Cole close at her heels to ensure no harm comes to her. Good thing, too, since their makeshift campsite is attacked by a wild boar who nearly gores Rhaenyra before being struck down by Criston. However, it’s Rhaenyra who finishes the job, heartily stabbing the beast with all of the pain and frustration she’s long restrained herself from expressing.

Her bloody encounter is a far cry from Viserys’ own. When his men discover that the rare creature they’ve been tracking is a regular ol’ stag, they figure its sheer size makes it a decent enough consolation prize. When Viserys goes to kill it, not because he wants to but solely because he’s expected to, he fumbles it, leaving the stag bellowing in pain. The second stab brings about the merciful death but the anemic applause lets us know the damage is done. Yet there’s a small freedom in realizing that no godly sign is commanding Viserys to name Aegon as heir, which allows him to dispel his growing doubts and reaffirm Rhaenyra as his heir. Unsurprisingly, the white hart finally does make an appearance, showing itself only to Rhaenyra and Criston. It may be a sign, but as we all know, signs are by no means a guarantee.

At the Stepstones, a bedraggled Daemon, surrounded by an ever-decreasing army of men who grow more weary by the day, receives word that Viserys is sending reinforcements so they can put down The Crabfeeder, Craghas Drahar (Daniel Scott-Smith), once and for all. Naturally, Daemon’s first reaction is to try to kill the poor messenger, so enraging is the thought that after three years of fighting, his brother may swoop in to win the war. The possibility is so unacceptable that Daemon is prepared to die to prevent it from happening. Using the very underhanded scheme of pretending to surrender, white flag and all, Daemon draws The Crabfeeder and his men out from the caves that have so effectively sheltered them before engaging in a one-man assault with the goal of killing Drahar himself. It’s a hell of a sequence, especially for viewers who may not enjoy the political intrigue quite as much. Just as it seems Daemon’s going to fulfill that secret death wish of his, his army appears along with a dragon, leaving Drahar’s men vulnerable to attack.

It’s a shame the series saw fit to kill off this formidable foe so early in the season (and offscreen?!). Craghas, we hardly knew ye. Pity since there was undoubtedly a fascinating story to be found with this character, from his advancing greyscale to the Sons of the Harpy mask he wears (via EW). But even though Craghas Drahar (aka, the individual with the best character design thus far) is no more, it does serve as a means of giving Daemon the glory he’s craved for so long. This is likely going to prove to be bad news for Viserys, who’s already given off an air of weakness throughout court, as well as the men who serve him. I also suspect that he’ll soon be regretting his decision to allow Rhaenyra her choice of husband, which will add another headache to the mix. Much like the white hart Viserys never laid eyes on, his ability to miss the signs around him, especially the ones that predict trouble, will only prove to doom the remainder of his reign, however long that may be.

Kaleena Rivera is the TV Editor for Pajiba. When she isn’t tearing her hair out over how cool a wordless battle between Daemon and The Crabfeeder could have been, she can be found on Twitter here.

← 'The Boys' and Eric Kripke to Toxic Fans: We Don't Want You | Watch: Pete Davidson and Kelly Cuoco's 'Meet Cute' Explores the Ick in 'Groundhog Day' →