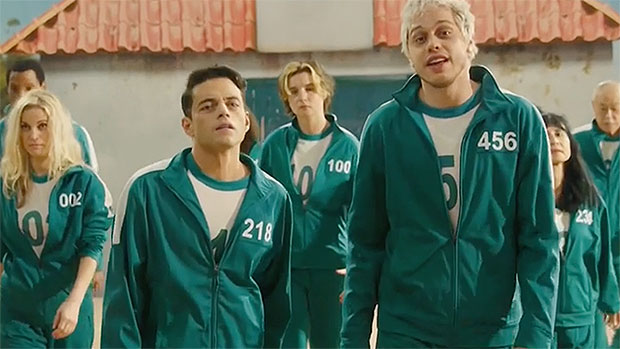 Cold Open — Huh. Colin Jost makes a rare appearance in a skit, playing Roger Goodell. It works. The new impressionist guy, James Austin Johnson, plays Gruden. Then there is a succession of coaches that get up and repeatedly resign because they are also racist. Then the Washington Football Team introduces its new mascot, Guisseppe the Stinky Italian. Eventually, the Raiders have to settle for … Levar Burton. Eh. (Score: 4.5 out of 10)

Rami Malek Monologue — Rami says he’s always preferred villains to heroes and does a decent monologue about it, but also says that he’s not used to doing comedy. That’s not hard to believe. (Score: 5 out of 10)

Bug Assembly — A group of kids dress up as bugs for a high school assembly. It’s 100 percent a showcase for Bowen Yang’s fabulous Daddy Long Legs. He is fabulous. The skit? Not so much. (Watch Here) (Score: 4 out of 10)

Squid Game — Pete Davidson and Rami Malek front a country song about Squid Game, and it’s not bad! Also not great! (Score: 5.5 out of 10)

Prince-Off — For a role in a Jordan Peele movie, Kenan Thompson and Rami Malek — as themselves — audition in a Prince-Off. Daniel Craig makes a cameo appearance, as well. (Watch Here) (Score: 3.5 out of 10)

Celeb School — Two players in a quiz game use the help of the celebrity panel. It’s mostly a showcase for celebrity impressions, including Pete Davidson and Rami Malek, who do very bad impressions of each other. Chloe Fineman, however, has a terrific Jennifer Coolidge, and Melissa Villaseñor has a strong Kristen Wiig, but there’s nothing about this skit that is particularly funny. (Watch Here) (Score: 2 out of 10)

Weekend Update — Can “Update” redeem this terrible episode? Che and Jost cannot, although Che delivers one of the biggest groaners ever about the grand canyon. But Bowen Yang as a Proud Gay Oompa Loompa who has just been outed while discussing Timothee Chalamet as Willy Wonka very nearly does redeem the night, and Chris Redd is better than I expected with very important unimportant news. Meanwhile, Mikey Day plays a hypnotist who puts Kenan to sleep and he pees himself, and somehow, there’s a good 5 minutes on this joke that works because Kenan is Kenan. (Score: 4.5 out of 10, except Bowen Yang gets a 7 out of 10).

Sleepy Town USA — Aidy finally makes an appearance (still no Kate McKinnon, and I haven’t seen Cecily tonight yet, either). She’s one-half of a couple with Rami Malek testing out mattresses, mostly by recreating arguments they have in bed each night, which also includes Rami jerking it in bed. Bad premise, but somehow the best skit of the night, mostly thanks to Aidy. (Score: 6.5 out of 10)

It is worth noting that Please Don’t Destroy — the new comedy troupe — also had a skit that didn’t air, and I thought it was decent, or at least, it’s the best Malek was all night.


← Review: Bruce Willis and Chad Michael Murray's 'Survive the Game' Is a Train Wreck | The Newest Trailer For 'The Batman' Is Here →