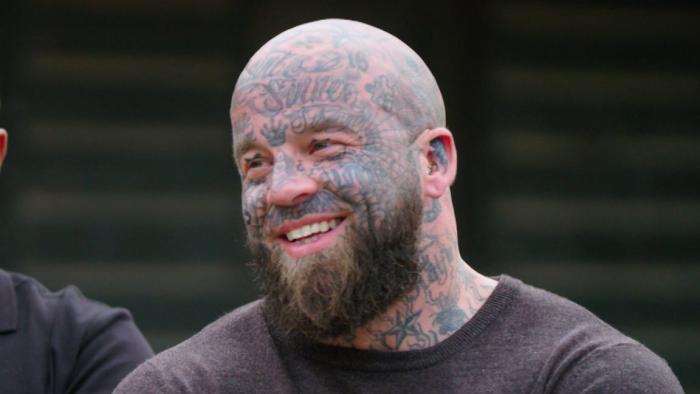 2020 is a year of mad-lib news. You could tell me literally anything right now and my instinctive reaction would be, ‘Yup, seems legit.’ It’s that kind of apocalyptic year, the kind of hellish state wherein ‘Nazi’ trends basically every damn day on Twitter and we barely bat an eyelid. So, this morning, when ‘Nazi’ started trending AGAIN, I thought nothing could surprise me, and yet here we are.

The History Channel has an upcoming reality competition series called The Chop, which they’re trying to pitch as Bake Off but for woodworkers. Extreme but cozy! The network’s Twitter account started sharing clips of their contestants, including Darren. He’s charming! He’s gruff! The host Lee Mack is totally won over by him! And also he has a Nazi tattoo on his face.

Meet the Woodman, the Bloke-With-All-The-Tattoos or Darren as we like to call him. #TheChop pic.twitter.com/uLdSRPr1S8

As noted by the Anti-Defamation League, numerical symbols are a common hate symbol for white supremacists. The number 88 is a particularly common one. H is the eighth letter of the alphabet, so 88 equals HH which, of course, means ‘Heil Hitler.’ The ADL notes that ‘88 is used throughout the entire white supremacist movement, not just neo-Nazis. One can find it as a tattoo or graphic symbol; as part of the name of a group, publication or website; or as part of a screenname or e-mail address. It is even sometimes used as a greeting or sign-off (particularly in messages on social networking websites).’ So yeah, we were all mega-suspicious when Darren the woodsman showed up with a big honking 88 on his face.

The History Channel quickly responded by insisting that everything was fiiiiiine.

The production team carried out extensive background checks on all the woodworkers taking part in the show, that confirmed Darren has no affiliations or links to racist groups, views or comments.

Sky HISTORY is intolerant of racism and all forms of hatred and any use of symbols or numbers is entirely incidental and not meant to cause harm or offence.


Gee, I’m not sure why people aren’t buying that excuse, but OK, let’s swallow this claim for a bit. Maybe Darren’s really just paying homage to his dad with a face tattoo of a number that has been entirely appropriated by literal Nazis and he was totally unaware of the symbolism. Sure, why not. That works if you overlook the fact that Darren Lumsden USED TO BE A TATTOO ARTIST!

AND ALSO THERE’S THIS!

But that’s just one of the tattoos. As noted by others on Twitter, it doesn’t seem to end here. He also has the numbers 23 and 16 on his face, which correspond to W and P. You know, as in White Power. Subtle.

But that’s the thing: It kind of is subtle. That’s the point. White supremacists deliberately obscure the meaning of their symbology as a way to signal solidarity with one another while maintaining a vague degree of plausible deniability. No, sir, it’s just a total coincidence that all the most important numbers in my life line up with Nazi symbols. And it’s bloody working. We’re already seeing people on Twitter jump through hoops to insist that this is all a silly hubbub around nothing. These are probably the same people who love to claim that punching Nazis is as bad as being a Nazi.

Punch all of the Nazis.