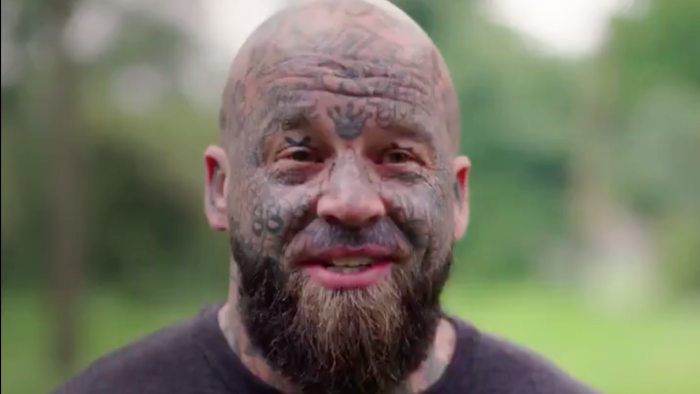 Remember the tattooed reality TV woodsman who may or may not but is probably a white supremacist? I know it only happened yesterday but time has no meaning in 2020 and there are, depressingly, so many Nazi scandals these days that it’s hard to keep up with them all.

For those of you who missed it: The History Channel advertised their new reality competition series The Chop, a hunt for Britain’s top woodworker, by introducing us to one contestant, Darren Lumsden. They sold him in a 48-second introductory clip posted to YouTube as a chipper guy with lots of face tattoos. What a scamp. But seriously, he’s got Nazi tattoos. He has the number 88 on his cheek, which, as noted by the Anti-Defamation League, is a popular numerical symbol among literal Nazis. 88 points to the eighth letter of the alphabet and is supposed to denote ‘Heil Hitler.’ He also has the numbers 23 and 16 on his temples. The two numbers often appear together as an abbreviation of WP, a.k.a. ‘white power.’

It did not take long for everyone on Twitter with two brain cells to rub together to point out to the History Channel — the f**king HISTORY CHANNEL — that hey, that dude’s covered in Nazi symbology. That’s kind of a problem. A bunch of people tried to play devil’s advocate and claim that maybe the numbers meant something else. Total coincidence, you guys, happens all the time.

Sky History, the British version of the channel, initially issued a statement in support of Lumsden, claiming that ‘the production team carried out extensive background checks’ and ‘confirmed Darren has no affiliations or links to racist groups, views, or comments.’ Lumsden, they said, had 88 tattooed on his face because 1988 was the year of his father’s death. No explanation was given for, you know, all the other f**king tats.

Well, it turns out that was a lie! Journalist Dawn Foster was the first to note that Lumsden’s father ‘was on the electoral roll at a Bristol address from 2002-11 despite allegedly dying in 1988.’ That story was then picked up by numerous publications, including The Daily Mail. Imagine being too racist for that rag.

They have now decided not to air any episodes of The Chop until they’ve ‘concluded that investigation.’ Funny, because they said they’d already vetted him. So what is the truth?

While we investigate the nature & meaning of Darren’s tattoos we have removed the video featuring him from our social media, & will not be broadcasting any eps of The Chop until we have concluded that investigation. Sky HISTORY stands against racism & hate speech of all kinds.

This is such a clusterf**k and one that could have easily been prevented. There isn’t a tattoo artist alive who doesn’t know the significance of those numbers and surrounding symbology. You’d also think THE HISTORY CHANNEL would have a few people on staff with a basic awareness of this. I know that they flushed their reputation down the tubes when they decided to become the home of anti-Semitic alien conspiracies, but still! But nope, now they’ll forever be known as the people too ignorant and, frankly, too driven by their bottom line to care about dealing with literal white supremacists who have their affiliations literally all over their face.

And yes, there are still people online trying to dismiss this as an overblown SJW cryfest. Nice one, guys. Side with the Nazis to pwn the libs.

← Yes, Daniel Kaluuya is Still Making A Weird 'Barney' Reboot | Just Some Highlights of Alexandria Ocasio-Cortez and Ilhan Omar Streaming 'Among Us' →