SOME SPOILERS ABOUT THE HIS DARK MATERIALS BOOK SERIES BY PHILIP PULLMAN AHEAD, BUT LIKE, NOT THAT MANY!

When I decided to write about His Dark Materials for Pajiba, I received the first four episodes of the season from HBO, and I binged them in one evening, and then I realized at the end of the four that I could barely remember much of what happened episode to episode. That speaks to a larger narrative problem within the show itself — that the plotting feels inconsistent, that the characters aren’t fleshed out as well as they could be — but I realized when rewatching “The Idea of North” Monday evening that my main problem with the first two hours of His Dark Materials is how much they are revealing already. Where is the mystery of this plot? Where is the richness and the grandeur? “The Idea of North” is a shocking exposition dump, and I feel like I blocked so much of the episode from my memory after initial viewing because I was legitimately extremely surprised that writer Jack Thorne shoved so much into this episode.

Let us recap, shall we? In this episode alone, Lyra learns:

- Lord Asriel is her father, not her uncle
- Mrs. Coulter is in charge of the General Oblation Board, or Gobblers
- That Mrs. Coulter’s golden monkey daemon can separate itself from her, which is against the natural rule of things

- The Gobblers are in fact very bad news, and they have Roger
- That Lord Boreal is able to travel between worlds, and has for a long time, confirming Lord Asriel’s theory that worlds other than theirs exist

Um, excuse me, but what the hell? These reveals are major portions of the first book of Philip Pullman’s series, The Golden Compass, and I am just sort of flabbergasted by how quickly the show inserts them into the narrative. Especially when there are so many other things I think the show has so far failed at really doing successfully, like building a compelling version of Lyra. 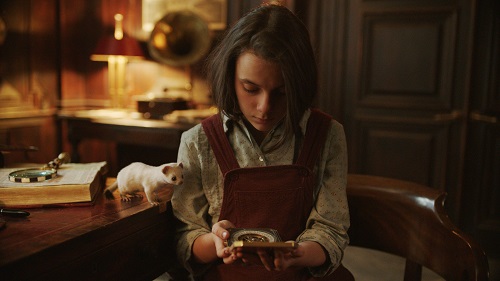 Is this Lyra curious, as she was in the books? Not really. She doesn’t repeatedly take out the alethiometer to examine it or wonder about it, as she did in the books, and it’s her daemon Pan who pushes her forward into action consistently. In the book, it is Lyra who pushes Pan, and that push-pull dynamic is more interesting because it centers Lyra’s perspective. Yes, Pan is her soul, and so they are essentially the same entity, but the books provide us with an understanding of Lyra’s spontaneity and rambuctiousness. When she moves in with Mrs. Coulter, we feel how trapped she is, how much she misses having the run of Jordan College, how deeply she was shaped by her friendships with other children not of her social class. By stripping those elements from Lyra’s backstory, we still don’t really know who Lyra is, and so her surprise at these revelations doesn’t really land. And also because of how Lyra has been changed from the books, the scene where Lyra lies to Mrs. Coulter about a Rapunzel-like situation with Roger is extremely bizarre. The show hasn’t shown Lyra lie before, although that’s a key component to her book characterization, and so the whole thing just seemed hella weird.

And I really cannot get over how quickly this show shares that other worlds exist, and that people can travel between them. I alluded in last week’s recap to how the show’s opening credits basically spoil this, but to reveal it with no fanfare? And to center that reveal on Lord Boreal, a character the show hasn’t really developed very well, either, instead of on Lyra? The climax of The Golden Compass shows us Lyra’s shock that Lord Asriel was right, and also her choice to step unknown into a world that could be entirely different from her own. Again, the narrative allows us to travel alongside Lyra, to pace ourselves next to her, to learn about this world and others as she does. The utter lack of drama in this episode given this reality-altering reveal — generously, it was disappointing; honestly, I thought it sucked.

Still, there are some things I liked in this episode: That fight between the golden monkey and Pan was thrilling and scary, and did a good job conveying Mrs. Coulter’s detached malevolence. Now, did the show treat the reveal that daemons and humans can’t be too physically separate from each other like something we should have already known? It sure did! That also probably fell flat for non-book-reader viewers! But that scene where Mrs. Coulter silently closes the door to destroy the room in that gorgeously decorated penthouse felt like an excellent glimpse into how tightly wound she is, and Lord Boreal crushing the journalist’s butterfly daemon and hence killing her was also pretty metal. Awful, of course, but a solid character moment.

+ I really can’t get a grasp on how they are developing Lyra. Dafne Keen is great, but that line, “I don’t think I understand any grown-ups at all,” felt so immature for a character who is supposed to be, what, 12? 13? I think they are really struggling to pinpoint her age and her personality, and I’m bummed by that because Pullman’s vision for the character is so clear in the novels, and Keen is such a good actress. She’s being let down here.

+ We learn that Mrs. Coulter does in fact have experience in the North, and I liked her scene among the other Arctic scholars and celebrities, very nonchalant while Lyra geeked out. But do we think the show has done a good job explaining why the North appeals so much to Lyra? I’m still not entirely convinced.

+ Merriam-Webster defines “oblation” as “anything offered or presented in worship or sacred service; an offering; a sacrifice,” so, make of that what you will regarding what the church-like Magisterium is planning to do with these kidnapped children.

+ No real updates on the gyptian front this week, but don’t worry, we’ll get more in coming episodes.

What did you all think? Did you like the pacing of “The Idea of North”? Am I just a jerk? Discuss!