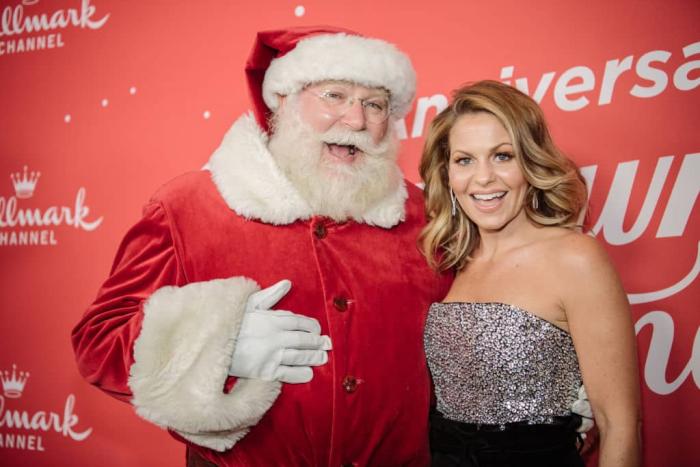 I wouldn’t blame anyone for not knowing what channel Great American Family is. It used to be called Great American Country and was under the Scripps/Discovery umbrella of networks. I never watched it either.

In 2021 the network was bought by GAC Media. A company owned, in part, by former Crown (aka Hallmark) Media CEO Bill Abbott. It’s really not surprising that they’re employing folks like Candace Cameron Bure who, according to Variety, has starred in about two dozen movies for The Hallmark Channel or its Murder & Mysteries sister network.

Back in 2020, Hallmark released its first Christmas movie with gay characters, The Christmas House, starring Jonathan Bennett (Mean Girls). That was the beginning of what Out Magazine dubbed “a deluge of queer holiday stories.” I’m not down with romance or Hallmark movies. Or Christmas movies in general. But I am here for more queer representation in traditional hetero-normative spaces. Candace Cameron Bure? Not so much.

If you know anything about her, or her brother Kirk, it’s not surprising that she announced her move to Great American Family has to do with her religious beliefs.

I knew that the people behind Great American Family were Christians that love the Lord and wanted to promote faith programming and good family entertainment.

That’s Pleasant White Lady Code for “they won’t tell gay stories.” That’s fine. She and White Jesus can move over to that new channel because it frees up Hallmark to continue their efforts at diversifying their casts and telling more inclusive stories. This winter, they’re debuting their first Christmas movie focused on a same-sex couple. Hooray for gay love at Christmastime.

As Mike mentioned in last night’s P-Love Candace and Great American Family are already getting flack for their bigotted viewpoint that somehow being part of the LGBTQ community is a “fad.” Hilarie Burton, who exists in pretty much the same stratosphere of fame as Bure, formerly of One Tree Hill and currently in various Lifetime Movies, let her have it over on social media. Saying, in part:

I called this shit out years ago when Abbott was at Hallmark. Glad they dumped him. Being LGBTQ isn’t a ‘trend.’ That guy and his network are disgusting. You too, Candy. There is nothing untraditional about same-sex couples.

Bure paints the changes in Hallmark programming as a negative, saying in an interview that “[Hallmark] basically is a completely different network than when I started because of the change of leadership.” The rest of us, however, can continue applauding Hallmark for making sure that all of their viewers can see themselves in their programming. Based on the key art for their “Countdown To Christmas” programming, Hallmark still has work to do. But it’s not quite the same WHITE White Christmas as previous years. While I do have my concerns about that Three Wise Men And A Baby, it can’t be any worse than Kirk Cameron’s Christmas movie.